"You're talking about tearing down the foundation of everything I know." 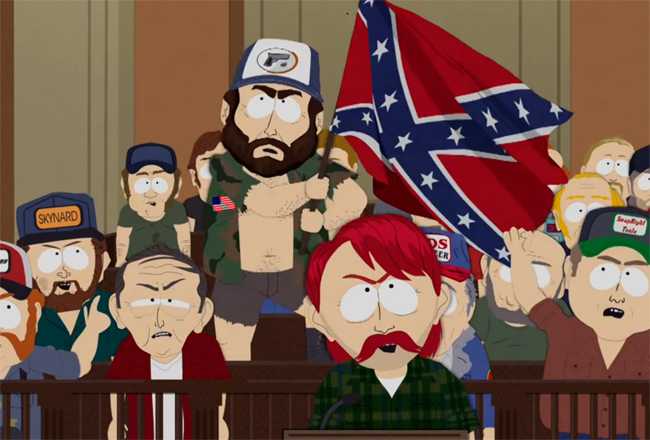 If television seasons can be counted as years, then our favorite foulmouthed fourth graders can finally head down to Whistlin’ Willy’s for a cold one when school lets out. Yes, now officially in their 21st years, Stan, Kyle, Cartman, and, saints be praised, Kenny have come of age, and yet we can’t imagine an “adulthood” that doesn’t pale in comparison to what they’ve already been through as third and fourth graders. If you’re tuning into this recap, you’ve likely been on parts, if not all, of that journey from anal probes to the first geriatric dick pic of the new internet. Luckily, whether you’ve never missed a Wednesday premiere or have only rediscovered the show now that daily life seems far stranger than South Park, few things remain as dependable a getaway as Trey Parker and Matt Stone’s quiet, little, redneck mountain town.

Most of these recaps will dive right into the episode at hand, but I might as well let you know how I intend to run this weekly space. Like all of you, I’m a South Park diehard, and like many of you, I can tell you precisely where I was and how it felt the night the first episode aired 20 years ago and changed television, comedy, and satire forever. You’ll no doubt learn more about why I love the show throughout the season, and if you look to the margins each week, you’ll see a sidebar showing a different list of my South Park-related favorites. That being said, I plan to treat Season 21 – and hopefully many more seasons to come – like a Super Bowl champion quarterback who’s already a lock for Canton. Parker, Stone, and the boys deserve all the respect in the world, but if on any given Wednesday they throw the equivalent of four INTs or blow a last-second gimme field goal, they’ll hear about it from this loving critic. Fair enough, right?

Now that the show has spent full seasons taking aim at off-the-rails PC culture, internet trolling, paralytic nostalgia, and the type of social climate that would elect a bigoted pervert like Mr. Garrison president, not even Parker and Stone have been certain of what to lampoon next. “It’s tricky now that satire has become reality,” explains Parker. “We were trying to make fun of what was going on [last season], but we couldn’t keep up.” It’s perhaps the greatest challenge the two have faced since cutting back on their Kenny slaying. How do you go about satirizing satire and, even with their week-of production schedule, keeping pace with a three-scandal-a-day administration? If the regular news now comes across like The Daily Show, fans have a legit right to wonder where the creators can set their sights in order to stay not only relevant but unique.

Tonight’s episode obviously wouldn’t have been possible without a giant douche in the Oval Office, not because we lived in a post-racial society before him, but because, until recently, the type of overt racism that wears matching hoods, goes to the same barber, and twirls more flags than a high school color guard had more or less been forced underground or online among the skankhunts of the world. If you recall “Chef Goes Nanners” — the Season Four episode in which Chef protests the blatantly racist South Park town flag — not even Jimbo and the “heritage” lot want the Klan on their side; no, that type of racism was rightly relegated to jokes about hitting the showers and lingerie beneath Klan robes. Charlottesville changed things, though — or, more importantly, showed us that things had changed under our negligent watch. Now, the same white people who voted for a giant douche — or at least against a turd sandwich — and believe in preserving statues find Klansmen, skinheads, and neo-Nazis casting identical ballots, showing up at the same rallies, and cheering on the same giant douche. If you’re a Trump supporter and this doesn’t concern you, I’m not sure what will.

But leave it to Parker and Stone not to simply make jokes about khakis and tiki torches this time around. Daryl, the redneck who looks like Jeff Foxworthy, and his fellow down-and-out white folks don’t come across as particularly racist at first. They can spit Kendrick Lamar verses and are more inclined to use their Confederate battle flags to swat at a bee or wave over some scalding-hot soup than to intimidate others. Their main concern is that they’ve seen their jerbs (jobs) dry up recently and blame automated newcomers like Alexa and Siri. On the other hand, you have progressive whites like Randy and Sharon Marsh who are renovating white America one house at a time on their new television show. Naturally, it’s bad for the business of white renovations that redneck protesters keep appearing during filming, but Randy has never thought to do a “renovation” to “break down walls” and provide an “open concept” for someone like Daryl. That job would be too labor intensive and dirty for him. It’s only after an agreement to have Daryl and his friends replace all the automation devices in town that things turn truly nasty. Daryl realizes that those FOBs (Fresh Out of Boxes) aren’t stealing the types of jobs he wants, gets condescended to by Randy for thinking he deserves better, and, in a moment of rage, unleashes a hateful vituperation against Muslims, blacks, and Mexicans. Randy may never quite understand that he’s actually been part of the problem, but he at least recognizes that people like Daryl shouldn’t simply be dismissed and discarded or assumed to be content as they are. Their renovations may just take more effort — in Randy’s case, a few more sledge hammers and mixed martial arts kicks.

When we look back at images from Charlottesville, it’s difficult not to feel hatred for those who marched on behalf of hate. It’s hard not to crack a smile when someone like Richard Spencer gets blindsided by a right hook while giving an interview. These ideologies of hatred need to be confronted, but, as this episode points out, it’s easy to forget that there are many of our countrymen and women who feel genuinely forgotten and left behind. When times feel hopeless, that’s when people lash out, blame others, and allow ideologies of hatred to fill the voids in their lives. Parker and Stone could have spent 20-plus minutes mocking white nationalism, and it may have made for a funnier episode; there aren’t a ton of laughs to be found here. Instead, they shed a light on how all of us allow hate to fester by failing to self-renovate and help out our hurting brothers and sisters.