Season Four finds the series in top form, even as one of its leads becomes unforgivable 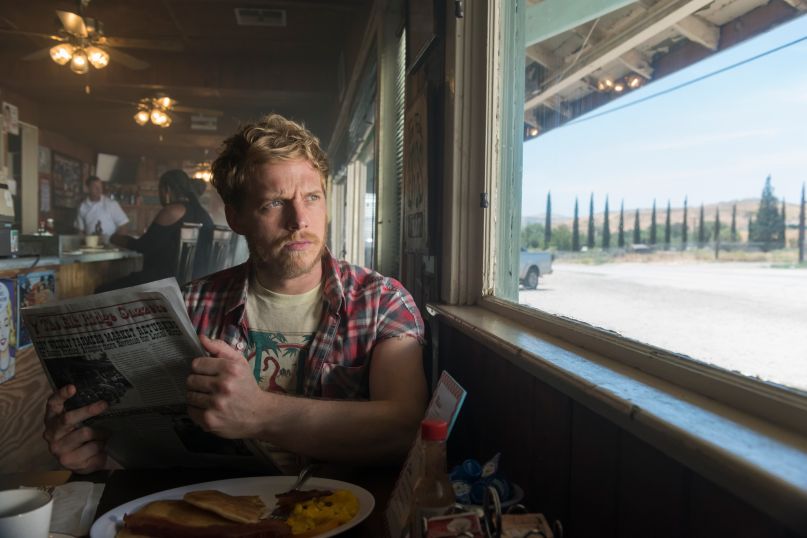 The following contains spoilers for episodes 1-3 of Season Four of You’re the Worst.

One word. Three little dots. In the first three episodes of the fourth season of FX’s You’re the Worst, it’s one tiny phrase that holds a great significance.

For Jimmy (Chris Geere), the Brit that outdid his own “worst” self at the end of last season by abandoning his girlfriend moments after proposing to her, it’s an olive branch to try to mend a mistake. It’s an attempt to say something when he doesn’t know what else to say. It’s a first step, regardless of how clumsy and selfish.

For Gretchen (Aya Cash), it’s an itch that she can’t scratch. As the woman spends months trying to cope with the inexplicable action of her new fiancé’s sudden disappearance, Gretchen can’t even manage to leave her best friend’s apartment. She’s smoking crack, painting cartoon dinosaur murals, and pretending to be working remotely in Paris. She’s desperately trying to keep her depression in check. So when Jimmy suddenly reaches out with “Hey…”, any progress that Gretchen has made towards healing, which isn’t much, suddenly gets turned upside down.

For three previous seasons, viewers have watched the ups and downs of Jimmy and Gretchen. Early on, the pair bonded over worldviews that found their selfishness, impulsiveness, and irreverence a perfect match. To each other, things that made them outsiders were attributes and not flaws. And, over time, the characters became more than just loveably despicable cartoons. Season Two focused on Gretchen’s issues with mental health while Season Three delved into Jimmy’s deep-seeded family traumas. Both characters still behaved ridiculously, but now in its fourth season, viewers also have some idea of where their actions are coming from.

But what the fourth season of You’re the Worst ponders in its first three episodes is whether the explanation of someone’s actions makes them forgivable. For Jimmy, the reasoning behind ditching Gretchen moments after proposing is simple: she said the word “family” to him and triggered the fight or flight instinct. He chose flight and feels like she should forgive his actions once she understands the motivations for it. But life doesn’t work this way. Just because we know why someone behaves the way they do, that doesn’t make their actions any less hurtful. There is still a choice involved when Jimmy decides to abandon Gretchen, and her triggering his hurtful connotations of family isn’t enough to warrant the betrayal that Jimmy inflicts.

If this all sounds heavy, that’s because You’re the Worst has perfected its art in its fourth season. Over the past couple years, the series has toed the lines of comedy, daring to approach serious topics like PTSD in war veterans and relationships involving mental illness without ever feeling overtly weighty. The show knows the difference between a heavy hand and a healthy dose of reality and how to use the latter to make the comedy more rich. It’s resulted in half-hours of television that are daring and singular, where nothing else on TV is able to hit such comedic ridiculousness in the same breath as human insights.

For its premiere two episodes, presented as an hour of continuous television, You’re the Worst offers up a new trick for itself: It’s effectively a reboot. The first half focuses on Jimmy, who’s grown a scraggly beard and is living in a mobile home retirement community. He doesn’t take much interest in getting to know any of his neighbors — save for watching old television shows with one particularly grumpy, old man named Burt (Raymond J. Barry) — and has completely withdrawn from communicating with his friends. Jimmy hasn’t just run away; he’s disappeared. And it’s only when he sees a potential future in Burt, a man who is content to grow old alone and has lost touch with his own waning capabilities, that he decides to return to his old life. For its reflective first 30 minutes, You’re the Worst hardly feels like a comedy, with little funny about the life Jimmy has slipped into.

When the show switches to catch up with Gretchen, as well as supporting players Lindsay (Kether Donohue) and Edgar (Desmin Borges), the fast-paced absurdity that You’re the Worst is most comfortable in comes roaring back. Gretchen is manic, sure, but she’s also just doing the best she can. Most importantly, she’s surviving, even it it involves not seeing the sun for three months. And while there is a lot to laugh about in Lindsay’s sudden thriving career and her and Edgar’s emotionless sexual arrangement, the two shine most when they are in their primary roles as friends. Both work to protect Gretchen from Jimmy because they have seen the damage he’s inflicted, knowing it’s less about choosing sides than it is about caring for someone that they’re close to. And when Jimmy and Gretchen finally come face to face at the end of the third episode, all anyone can do is sit back and watch the carnage.

But while You’re the Worst stays true to its premise and divides its time evenly between the two leads, for the first time, there is clearly a side to be taken. What once was a perfect romance between two flawed individuals now has Jimmy as firmly in the wrong. There’s even a sense in these few episodes that things between the couple can never go back, that trust can never be regained. In a show where all of the characters have long collectively been the worst together, now just Jimmy has that title. It’s not just the fact that he blew up his relationship with Gretchen with one thoughtless action. it’s the fact that he thinks he can begin to repair it by sending a text message. “Hey…” is not the start of an apology. Even his eventual apology is not really an apology. His past traumas may explain his actions, but there is no forgiveness for Jimmy from Gretchen, or the audience, in sight. Jimmy is truly the worst.