The promo video shows Landis in a straightjacket, and with good reason 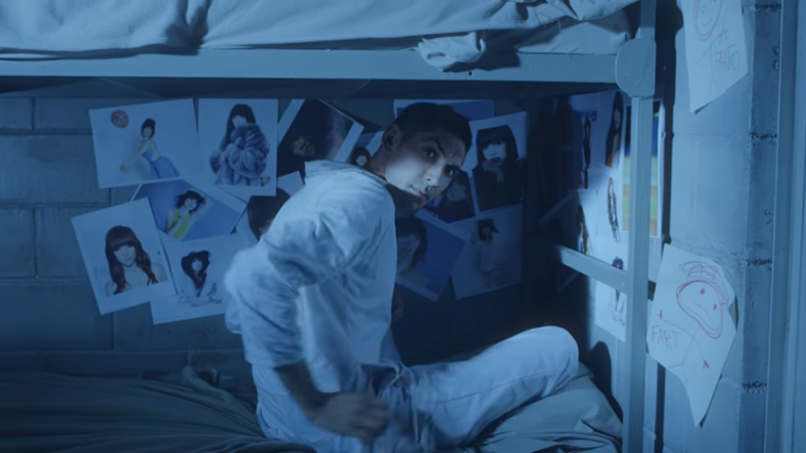 Max Landis marches to his own beat. Yesterday, we reported on the fact that the young and rising screenwriting talent behind Chronicle and American Ultra pushed forth with his planned remake of his famous father John’s classic An American Werewolf In London despite the elder Landis’ advice to the contrary. If Max’s determination to dive into that project seemed oddly bullheaded, dig this: Landis has penned a 150-page essay, launched a website, and produced a YouTube video all dedicated to his ridiculous fan theory that every Carly Rae Jepsen song is connected and makes up a single narrative about a relationship gone wrong.

Landis is aware doing all this over a pop star seems crazy, and he’s embracing the insanity. The intro video for what he calls “The Jepsen Pattern” features Landis ranting into the camera about a world “where the Beatles only sang songs about yellow submarines. Where every Beatles single song, no matter what, eventually came back to being about a yellow submarine.” Once he gets strapped into a straightjacket, Landis goes on to say he’s “discovered something,” and that something is the fact that every bit of Jepsen’s music is connected. Everything.

We here at CoS love CRJ and fully support being obsessed with quality art (just look at our Twin Peaks coverage), but this is truly something else. If you too are the obsessive type and would like/have time to go down the deepest of Carly Ray rabbit holes, you can check out Landis’ website dedicated to the cause, A Scar No One Else Can See. To dig even deeper, you can download the entire 150-page PDF.

Landis shared his glee about hipping people to some of Jepsen’s lesser known work and his enthusiasm for the project in general on Twitter, where other CRJ fans are digging into Landis’ obsessive research. For Carly’s sake, I hope Landis’ theory is wrong, because this theorized one failed relationship would have to have been an utter shitshow to lead to that much music.

Here’s an idea for a “Call Me Maybe” remix Jepsen can use for free: “Max, I just read this, and it is crazy / So close your computer, and go outside maybe?”

The only thing more gratifying than watching people discover the pattern is seeing people become aware just how many great songs Jepsen has.