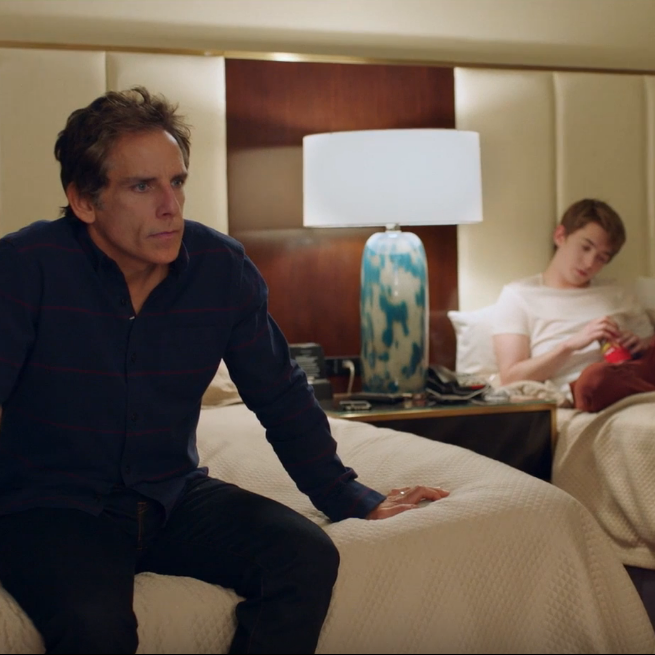 Likability is overrated — as a character trait, a personality trait, a means by which we choose our elected officials. Raging Bull isn’t great because we like Jake LaMotta so much. Breaking Bad isn’t one of television’s great dramas because we’d love to have a beer with Walter White. There’s not a damn thing wrong with centering a story around a character who isn’t likable. Bring on the meanness, the self-involvement, the narcissism and emotional instability. Give the world movies about assholes, and the world will show up.

Brad (Ben Stiller) is not likable, but that’s not the problem with Brad’s Status, a sometimes wry, sometimes dour character study from writer-director Mike White (Enlightened). The problem is that Brad’s an idiot, and the film is an exercise in waiting for a deeply self-involved person to figure out what both the film and the audience will know from nearly the first scene onward. While the ride is often entertaining and the performances mostly satisfying, it’s a frustrating experience, like watching the journal of the least self-aware person you’ve ever met come to vivid, whining life.

The events are fairly straightforward. Brad has a charming wife, Melanie (Jenna Fischer), and a brilliant son, Troy (Austin Abrams, giving what’s easily the film’s standout performance). He runs a non-profit about which he once was passionate, lives in a beautiful home in a nice city, and yet finds himself in a cloud of malaise spurred mostly by the success of his college friends: political pundit and author Craig (Michael Sheen), semi-retired tech mogul Billy (Jemaine Clement), financial titan Jason (Luke Wilson), and film director Nick (played by White himself). While in the grips of an entirely self-imposed spiral of shame, resentment, and paranoia, Brad has to take Troy to look at some colleges. A fairly mundane mistake disrupts Troy’s visit to Harvard, forcing Brad to call upon these old friends to pull successful strings and send him further still into his cloud of sad self-involvement.

What with having to peer straight into that cloud for 100 minutes, Brad’s Status is an uncomfortable watch, but that’s not entirely a bad thing. Stiller’s dry narration, overlaid with a glistening patina of self-loathing, might be unbearable if it weren’t also the perfect launchpad for some of the film’s best jokes, which almost always take the form of the paranoid, jealous fantasies he concocts about his friend’s lives. It’s as if these sequences come complete with Instagram filters designed to make them all look breezier, prettier, richer, and more insufferably smug. The fantasies, absurd though they may be, make it all the easier to empathize with Brad’s feelings of inadequacy. He hates them, and he hates himself nearly as much.

The whole film would sink like a stone if Stiller weren’t so adept at playing exactly this type of man, a lonely guy who has let resentment sour nearly everything in his life. Brad might not be able to see the forest through the trees, but you get the sense that Stiller and White both have his number, and if they dig into his shortcomings mercilessly, they approach his better qualities with a similar lack of restraint. The camera spends a lot of time lingering around Brad’s eyes, and you see the flickers of disgust that cross his face as Brad tries to overcome his worst instincts and simply help his son. If anyone could make this guy sympathetic, it’s Stiller, and he mostly succeeds.

Both Stiller and the film are at their best when the former spars with Abrams, whose Troy wrestles with his father’s increasingly strange behavior with as much compassion as a teenage boy in a stressful situation could be expected to muster. It’s to the credit of both Abrams and White’s script that Troy, a musical prodigy with surprisingly grown-up coping skills, comes across as not only believable, but familiar. He’s what you’d call a good kid. Abrams seems to have mastered the art of restraint at a surprisingly young age, and it’s his underplayed but emotionally rich performance that anchors the film in anything resembling tolerability. The ending, too tidy by half, very nearly works, and it’s through his quietly Herculean efforts.

It’s clear that Brad’s Status knows exactly what Brad’s problem is, and that’s true long before idealistic college student Ananya (Shazi Raja) spells it out for him: “You still think the world was made for you.” The world was also made for this film, aware in every frame exactly how ludicrous the “white privilege, male privilege, first-class problems” of its hero are, yet determined to give them 100 minutes of examination all the same. It’s aware how tawdry it is for a father to imagine running away to Hawaii with the friends of his young son, to perceive their passion and joy for life and transform it into a delightful beachside sex heaven where everyone’s in a cute bikini and smiling in the sun. It knows that all of Brad’s jolts back to rationality will probably be short-lived (Mark Mothersbaugh’s terrific and profoundly irritating score does a lot of the work there). It knows, and it wants us to know that it knows, that it’s not blind to how incredibly shallow and small these problems are, regardless of the size of the damage they cause.

It knows, but it makes those choices anyway, and chronicles them in detail. Brad’s Status isn’t a bad film. It’s well-written, well-acted, well-shot. The biggest technical issues are a lackluster American accent from Sheen and an ending that’s somehow both rushed and overlong. Yet it’s hard not to wish for a film about what comes next — what happens after Brad spends all that time discovering how unbearable he is. Watching someone live their life with clear eyes and an understanding of the world may not be as interesting as a near-meltdown, but it’s a lot less likely to make you resent the time you spent in the theater. The world has plenty of rich white men explaining how much their lives suck, blissfully unaware of how good they have it. Likable or otherwise, Brad probably could have stayed home.