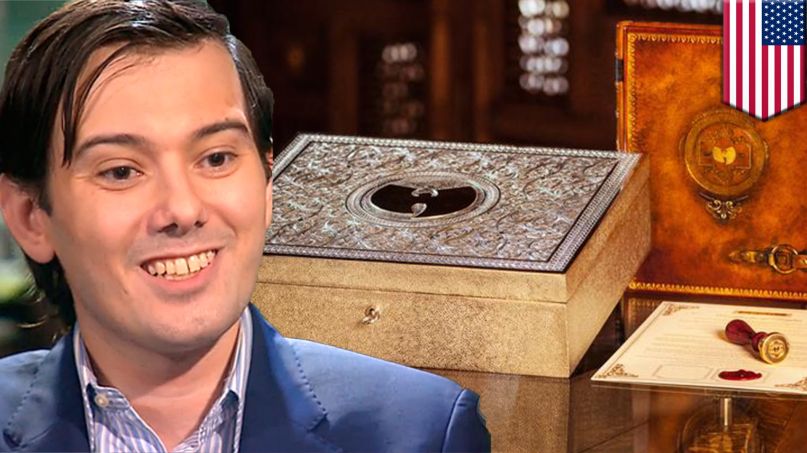 Pharmadouche and real-life Lenny Luthor Martin Shkreli might be going to prison after being found guilty of securities fraud. This is a good thing for many reasons, chief among them the fact that he’s now auctioning off the one-of-a-kind Wu-Tang Clan album, Once Upon a Time in Shaolin, on eBay. He purchased the album in 2015 for a reported $2 million.

A Trumpian note accompanies the listing, in which he takes yet another jab at Ghostface Killah—who famously described Shrkeli as “the man with the 12-year old body”—and laments the “world at large” for failing to “see my purpose of putting a serious value behind music.” This coming from the guy who would only share snippets of the album if Donald Trump won the 2016 election and, in this note, claims that “at any time I may cancel this sale and I may even break this album in frustration.” Those jurors were right, man.

Here’s the note in full:

“This is the one and only Wu-Tang album. I decided to purchase this album as a gift to the Wu-Tang Clan for their tremendous musical output. Instead I received scorn from at least one of their (least-intelligent) members, and the world at large failed to see my purpose of putting a serious value behind music. I will be curious to see if the world values music nearly as much as I have. I have donated to many rock bands and rappers over the years to ensure they can continue to produce their art when few others would.

At any time I may cancel this sale and I may even break this album in frustration. I will donate half of the sale proceeds to medical research. I am not selling to raise cash–my companies and I have record amounts of cash on hand. I hope someone with a bigger heart for music can be found for this one-of-a-kind piece and makes it available for the world to hear.

Upon sale, I will represent & warranty any copies of the music I have will be destroyed. I have not carefully listened to the album, which is a double CD. There is also a finely crafted booklet which you can read about elsewhere. I will pay legal expenses for the buyer up to $25,000 to ensure the final purchase details are mutually agreeable.”

That’s very generous of him to donate half of the proceeds to medical research, but considering his companies “have record amounts of cash on hand” you’d like he wouldn’t need the rest. Also, maybe he should’ve just done the right thing the first time.

As of this writing, the bidding is set at a cool $100,000. Cool rich people, we turn to you. No word yet on if he’ll also be selling Lil Wayne’s long-awaited Tha Carter V.