A playlist brought you by a King of Pop, a Jersey girl, and some lads from Dublin 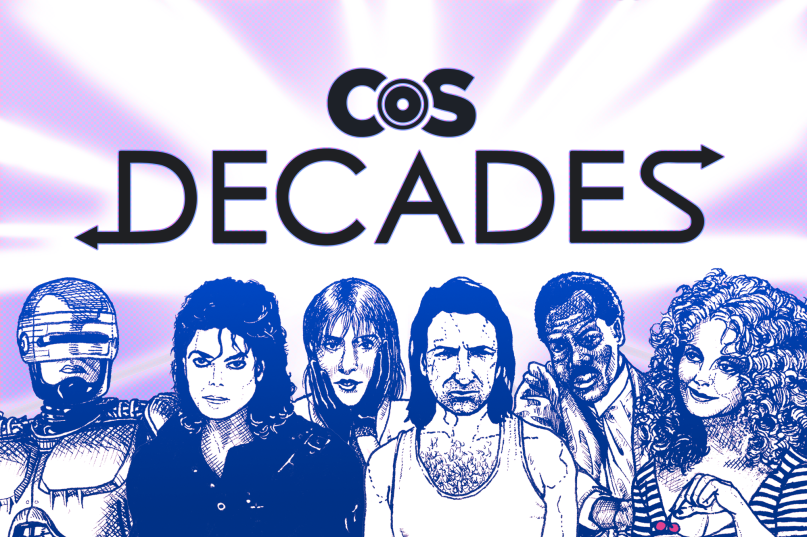 Decades is a recurring feature that turns back the clock to critical anniversaries of albums, songs, and films. This month, we dial it back to the top 25 songs of 1987.

Fine Brothers Entertainment, better known as YouTube channel FBE, has been making reaction videos for more than a decade now. One of their most popular segments features people of different ages trying to identify and make sense of pop-culture or technology from before their time – or aimed at a different demographic. For instance, they might ask grandparents to listen and respond to a new Beyoncé single, or young children raised on Blu-Rays might be tasked with guessing the function of an old VCR. The results are usually a comical mix of kids (or whomever) say the darndest things and a reminder that time marches on with or without us.

In several episodes, I’ve seen kids or teens (those born this millennium) challenged to listen to songs and name the artist – several of whom appear on this list. Given the generation gap and that failed attempt to ID a VCR, I gave the young people little hope. And, for the most part, I was proven decidedly wrong. If kids couldn’t name the artists, they had at least heard the songs before and knew some lyrics. And certain artists, like Michael Jackson, they all knew. When we speak of timelessness, it’s one thing to be remembered. It’s quite another thing to continually be discovered again and again.

Looking at this list, many of these artists – as well as their albums and songs – likely will be both remembered and discovered long after we become eligible to take part in the FBE grandparent reaction videos. Some of these songs sound “so ‘80s,” but they defined the ‘80s. They couldn’t have been produced at any other time, and yet in any other time, including now, they still make us smile, dance, and bang our heads. It’s why timelessness and music matter. Because music brings us, among so many other things, joy, hope, solace, solidarity, inspiration, and wisdom. Should succor come all the way from the ‘80s or a song that tops the charts later this year, I’ll gladly welcome it. We need all the help we can get.

So, here are 25 songs that have managed to survive 30 years to meet us in the present. They come from kings of pop, lads from Dublin, and Jersey girls. Packed and preserved carefully so that we can remember or discover them as they were and as they are. So, click ahead and make sure you know as many of these songs as possible. After all, you don’t want to be outsmarted by some sweet, little brat on YouTube, do you?

At 46, Grace Slick became the oldest woman to have a No. 1 single with Starship’s “Nothing’s Gonna Stop Us Now”. (A feat that would later be broken by a 52-year-old Cher and her single “Believe”.) You wouldn’t know it, though, as the former Jefferson Airplane crooner is so ensconced in ’80s production that it sounds like it’s coming from Sheena Easton. That shiny nugget of trivia is kind of crucial, though, and almost serves as a meta parallel to the song’s overarching themes of unthinkable triumphs. The song already cuddles the heart like a warm Teddy Ruxpin, but knowing it came from a singer who’s pushing 50 and arguably floating around in the latter half of her career is unquestionably awesome. In hindsight, it makes this single feel less like a rote nostalgic soundtrack hit for an Andrew McCarthy movie and more like an anthem for any woman struggling to survive an ageist and sexist industry. On the other hand, it’s also just a blast to sing along to on those not-so-sunny days. –Michael Roffman

After blowing minds with their seminal 1985 debut, Psychocandy, which took sweet pop melodies and strangled them with barbed wire before drowning them in abandoned swimming pools of feedback, The Jesus and Mary Chain returned two years later with Darklands, a collection of gloomy, glowing pop unrolling across an infinite expanse. And, as we know, that somehow worked, too. Lead single “April Skies” shrugs along moodily atop drum machine beats – drummer Bobby Gillespie having left to front Primal Scream – as William Reid’s working-class chug and Jim Reid’s aloof, boy-girl melodrama (“making love on the edge of a knife”) politely mingle. But then that darkening sky finally cracks, and the listener feels as if they’ve crawled out of an underground cave and into the open and can see a million miles in every direction. It’s a liberating, transcendent song that never raises its pulse and lends an emotional dignity to the troubles of the adolescent heart. –Matt Melis

Rolling and echoing, the lyrics to Sonic Youth’s “Schizophrenia” become your reality, even if just for a few minutes. Thurston Moore’s calm and confident delivery prods you to remember and feel the faint prick of nostalgia over a calm and steady rhythm section, making his memories seem almost matter of fact — as if they’re your own. But these seemingly humble beginnings give way to the track’s true peak — essentially, the song’s turning point — when Kim Gordon lightly sings, “My future is static/ It’s already had it.” The music grows frenzied, mirroring its namesake, epitomizing Sonic Youth’s more mainstream approach to the avant-garde — complex and vast without being unlistenable. Though not radio-ready or powerfully anthemic, per se, the track’s power is in its control. In only four minutes and 38 seconds, “Schizophrenia” contains a lifetime. –Carly Snider

The fairytale had come to an end by the late ‘70s for Boston bad boys Aerosmith. With a string of five platinum albums and an arsenal of singles that are still played on classic rock stations today in their back pockets, the band found themselves strung out and falling apart – guitarists Joe Perry and Brad Whitford each exiting for a time. Little could they have known that sobriety, a hip-hop duo, and a titular dude in drag would be the fairy godmothers who would grant them a second life. After finding the limelight again with a hit remake of their own “Walk This Way” alongside Run-D.M.C., a sober Aerosmith hired producer Bruce Fairbairn, scored some songwriting help, and recorded Permanent Vacation, their true comeback album. And it was second single “Dude (Looks Like a Lady)” – the band’s funkiest and funniest song in years – that transformed Aerosmith back into stars overnight. Either inspired by a night out with Vince Neil or by the appearance of the Mötley Crüe frontman himself, this song about getting a little more than you bargained for in a pretty face featured a rejuvenated Perry and Steven Tyler, devil horns, and one of the catchiest finish-this-line choruses in rock history. At a time when alt-rock and grunge were beginning to mobolize, Aerosmith proved there was still room for a blues rock band to dominate the world. Thirty years later, we’re still not worthy! –Matt Melis

It’s hard to separate “Faith” from its music video (the close-up on his wiggling butt was pre-GIF, but considering the number of times I’ve seen those few seconds loop in the 30 years since would seem to suggest otherwise). There’s so much leather and hairspray and swagger, but yet also so much genuine passion; stepping out from Wham!, George Michael needed to show some edge while upholding the stellar grasp on pop music and hearts that got him where he was to begin with. Michael’s first few singles pushed boundaries, “Faith” did so while also delivering an all-time classic hook. The iconic tambourine keeps things moving (the layered, shuffling percussion is a symposium in simplicity), but it’s Michael’s wide-ranging vocal sensuality that is the effortless star of the show and the reason it remains a karaoke mainstay. –Lior Phillips