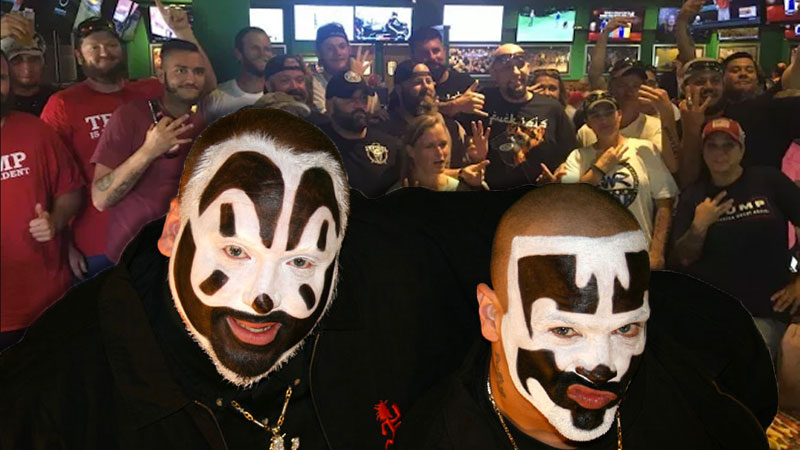 We live in a time when it seems a new demonstration or rally emerges nearly every day. Marches and counter-protests are essentially just a part of life at this point. Which is why it was only a matter of time before two completely different cultural sections met face to face on the field of protest due to shitty schedule planning.

On September 16th, fans of Insane Clown Posse are set to take to the Washington Mall for the Juggalo March in protest of the FBI’s classifying Juggalos as “a loosely organized hybrid gang.” The gathering has been in the works for over a year, but they suddenly find themselves in real estate competition from a new pro-Trump demonstration called Mother of All Rallies. Billing itself as “the Woodstock of American rallies” while completely missing the irony of being named after the world’s most destructive non-nuclear bomb, M.O.A.R. seeks to “demand protection for traditional American culture while they express their love for the United States and the America First agenda,” according to its website. If that sounds a little alt-righty to you, well, it kind of is.

The group’s founder, Tommy Gun (aka the Pissed Off American), says in a video that the demonstration is “not a Donald Trump rally” but a “pro-American culture” one, going on to invite “Asian for Trumps [sic]… Mexican, African-American… Latinos for Trump” and even non-Trump supporting “patriots.” Still, images proudly posted on the M.O.A.R. website see Gun and a group of friends at a bar flashing the OK hand signal that has been appropriated by the alt-right (because it’s 2017 and we literally can’t have anything nice) and wearing shirts that say, “I refuse to coexist with people who want to kill me” and “Right Wing Death Squad.”

M.O.A.R. is set to start at 11 a.m. at the Washington Monument, while the Juggalo March is scheduled for noon at the Lincoln Memorial. The former will head towards the capitol while the latter will loop around the Washington Monument and return to its starting point. In other words, when you factor in featured speakers and concerts (Madison Rising is set for M.O.A.R.), the two demonstrations have a good chance of literally running into each other.

It’s hard to estimate what would result from such a clash of cultures; there hasn’t been much research on the Juggalo-alt-right overlap, though this Juggalos 4 Trump group suggests there likely is some. As of now, the M.O.A.R. Facebook group has 7,206 likes with 1,500 saying they’re going on the rally’s event page, while the Juggalo March group has only 3,186 likes but 1,700 say they’ll attend the event. If all these groups of completely reasonable people do end up in DC at the same time next month, let’s hope they keep things civil and can make America woop woop again peacefully.