Lollapalooza Review: The Lorde Giveth and The Lord Taketh Away

by Lior Phillips and Philip Cosores 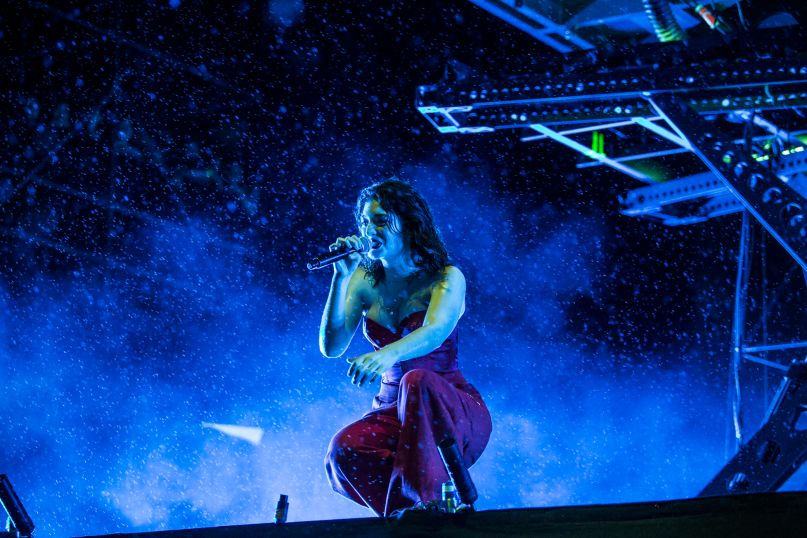 When the sky cracks open and the rain starts to fall, Lorde has already become the center of the natural world, the droplets and wind swirling and dancing with her. It might seem flighty, but seeing her move and perform, she truly is a force of nature, a mystic power connected intimately with the world, perhaps a druid – or in her words, a witch. “Melodrama is about being a witch,” she said at her Lollapalooza Thursday headlining set, acknowledging that thunder and lightning have seemed to follow her around lately. “I’d like to think it’s because you and I, tonight we’re gonna conjure the spirits,” she said, swaying as though her hands were weaving the threads of fate.

And for a while, the New Zealand pop star did just that, commanding the stage and the rapt attention of the massive, mud-spattered, and soaking crowd. The brilliantly chosen “Running Up That Hill” (from fellow pop witch Kate Bush, featuring the prophetic line “Oh, there’s thunder in our hearts”) played prior to Lorde’s entrance, a harbinger of what was to come. When she did step on stage, she did so masterfully, but with enough humble grace to still feel like she needed to introduce herself: “My name is Lorde, I’m from New Zealand, and it is my great pleasure to be here.”

An orchestral snippet of “Green Light” functioned as an intro, a mature, esoteric choice from an artist full of them. Choices like using a string version of a brand new song to amp the melodrama at the start of the set and reinforce its instant classic status show how much she believes in her voice – both literally and metaphorically. “Tennis Court”, the opener to her 2013 debut, Pure Heroine, followed in a flash, a seamless transition as if those songs were meant to work together all along.

The sweetly sung, yet raw-nerved tune summoned further multitudes than its already expressive recorded take; she’s a star, yet unapologetically and unflinchingly herself, normal and odd, humble and explosive, liquid and sharp, open and anxious all at once, a glowing beacon for human connection. You can picture the world through her words, feel every syllable physically, find yourself living in the scene she describes. In 2017, the idea that words can still stun you seems ridiculous, but Lorde paints intensely clear, innocent portraits that acknowledge life’s journey in a way that defies the chaos around it.

A cover of Disclosure’s “Magnets” came next, though the control she had over the song would make it impossible to guess it wasn’t coming straight out of her mind. Pure Heroine standout “400 Lux” followed, a song even further improved in the last four years. The instrumentation has grown deeper, her vocal take grander, curving and climbing over its surroundings like vines.

She’s not just a conjurer, hell, she is a commander in charge of every moment.

At that point, the rain started to threaten a little stronger, but Lorde’s enrapturing charisma made it feel more like a blessing. The trance had been enacted fully, and the crowd was dancing along to each of her steps, a beckoning bliss spread throughout thousands. “I want to do something I’ve never done before, Lollapalooza,” she said. “I want to play you a song I’ve never played before!” Those few, simple words caused an ecstatic cry of anticipation to go up spontaneously from every corner of the field.

But it wasn’t to be: Lorde’s production manager walked on stage, flashing hand signals that clearly meant bad news. “The festival said the weather is too crazy for us to play right now,” Lorde cursed the sky, “Fuck!” before vowing a return. “I will be back for you! I promise!”

The crowds lingered, holding out hope that the quick exit would be temporary, but soon after, a massive, dire red sign spread across the video screens calling for an evacuation of the festival. While entirely frustrating – for fans and Lorde alike – to only get through three and a half songs, it’s hard to imagine any other set feeling this satisfying. The heavens opened up, and the Lorde arrived, a sweet blessing no matter how brief.