An artistically and thematically arresting debut feature from writer-director Kogonada 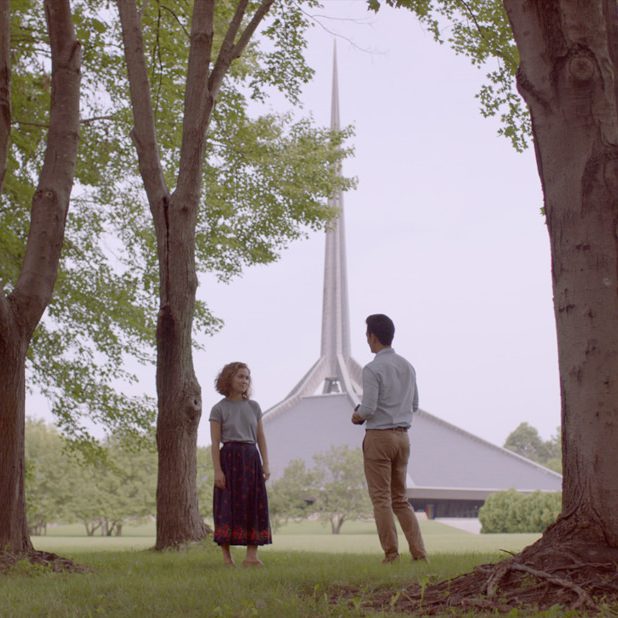 Among its many substantial virtues, Columbus is a film that understands the romantic appeal of the intellect. This is a restrained piece, where most desire is left subtle. But in its many lengthy and wandering conversations, its characters speak with thought and passion, challenging each other on their beliefs and stances about life, always with mutual respect. Admiration naturally grows out of curiosity. Longing is captured in halted glances, or in a smile and a bit of eye contact held just a second or two longer than usual. This is a film of rare consideration, about everything from art to grief to existence to the simple act of wanting.

When an esteemed professor of architecture suddenly collapses one day in Columbus, Indiana, his son Jin (John Cho) is unwillingly dragged to the Midwestern town to await whatever may come next. If his father recovers, it will mean only the continuation of an already estranged relationship between them. If he doesn’t, Jin will find himself in the curious position of being morally and culturally obligated to mourn a man about whom he feels little beyond a dull, long-simmering anger. As Jin explains, some corners of Korean culture consider it reckless to improperly honor the dead, lest their spirits wander the Earth as ghosts. (First-time director Kogonada adds a rich cultural specificity to several of Jin’s scenes, allowing both filmmaker and actor to distinguish themselves in ways that so many films too often bury or disregard.) In the meantime, he becomes a waking ghost of his own in a way, drifting through Columbus with a detached curiosity, waiting.

Whether she realizes it or not, Casey (Haley Lu Richardson) is also waiting. She works as a librarian at the local college while taking care of her ex-addict mother, sometimes waxing philosophical with a clearly interested coworker (Rory Culkin) and making concerned phone calls to make sure that her mom really is working the night shift at her custodial job like she promised. Casey is a wildly intelligent young woman, albeit one who’s resigned herself to becoming a lifer in Columbus. She chases work, and immerses herself in her sideline job as a tour guide of the impressive local architecture, but always remains firm about one thing: she will remain here, making sure that her mom continues to do well. Still, sometimes in the later hours of the night, Casey gazes over the perfect symmetries of the local buildings. There’s beauty in the small things, and it speaks to a deeper yearning within her.

Soon Jin and Casey cross paths, at first exchanging a cigarette and eventually becoming friends, two souls at a crossroads, stuck in anticipation of what might come next. Columbus is not a drama of grand revelations; secrets are revealed with time, but are usually of a modest and more personal sort. Their unassuming presentation is what lends them impact, as there’s not a false moment in the film as far as its characters’ emotions are concerned. Jin lightly ribs Casey for her tendency to turn their discussions of local art and architecture into a tour guide’s diatribe, prodding her to explain why she’s moved by it instead of simply interested in it. (In one of the film’s many lovely moments, Casey’s explanation of why a glass-paneled building moves her on an emotional level is left unheard beneath the film’s score, an intimate moment for her and Jin alone.) The two parry and retreat, each teasing out information from the other, each always careful not to overstep boundaries.

Emotional lines are as integral to the film as its visual lines, and Columbus does breathtaking work in establishing these connections throughout. While the film’s understatement in its storytelling is a virtue, its frequently staggering images offset that nuance. Cinematographer Elisha Christian balances a keen eye for the beauty of Columbus as a small city with clean lines of her own, adding depth to the already meticulous craftsmanship of so many local buildings. Columbus, as a real-life locale, is known for its impressive modernist architecture, from the halls of academia to the churches to the municipal bridges. What Christian and Kogonada accomplish in working through and around these spaces is often remarkable, mustering tiny visual jokes and emotional brushstrokes through the simplicity of everyday life.

The film seamlessly integrates the visual and the narrative, building character and story and a firm sense of place through depth of field and claustrophobia alike. In one scene, Jin and Casey smoke cigarettes on opposite sides of a car, loosely discussing the meth epidemic tearing apart so many small American towns while separated into flawless thirds in a static frame. In another, Jin drunkenly attempts to seduce his father’s partner (Parker Posey), and the entire scene unfolds through mirrors, the slurry and forlorn emotions of the moment left to the characters, to be viewed at a distance. This is crucial to Columbus: it’s easily among the most visually arresting films of this year, but its symmetries exist in the service of more than painterly filmmaking. It is a film heavily concerned with the human aspects of artistry, and how even a well-built bank can touch and enrich an inquisitive eye, and mind.

The whole of Columbus is spent with Cho and Richardson, whether separate or together, and both actors do excellent work at shading in complex characters that might have rung with pretense in a lesser film. Here, each is a cipher waiting to be decoded by somebody capable of understanding them. Cho delivers what in a just world should be a breakout turn of a different kind, announcing him as a leading man of formidable premise. His constant exhaustion is undercut by a razor-sharp charisma. Even in silence, he’s a magnetic screen presence, and there are multiple instances in which he swings from warmth to guarded bitterness and back again with a deft hand. Richardson is the comparative heart of the film, a woman destined for better things who chafes at being told she deserves more when she’s struggling to find peace in her own right. Kogonada pauses on Richardson’s lightly expressive features, and the actress responds by sliding notes of regret and uncertainty and heartache into every lingering glance.

Columbus is also a surprisingly authentic portrait of the Midwest, for all of its meticulous compositions. Where so many films treat middle America as a source of either corn-fed humor or recession-burnt agony, here is a movie that actually takes the time to capture the sensations of its specific location. The use of light, particularly at night, will ring wholly true to anybody who’s ever found the beauty in halogen islands between stretches of oppressive darkness. There is no precious condescension, or inauthentic detachment. Instead, Kogonada matches the inquisitive eye of his two leads, finding the splendor in the everyday, the unusual in the unlikeliest places, and the need for connection that runs beneath all things.