10 Other Nerd Rock Bands You Should Know

These are the geeks, dorks, and dweebs who followed in Devo's nerdy footsteps 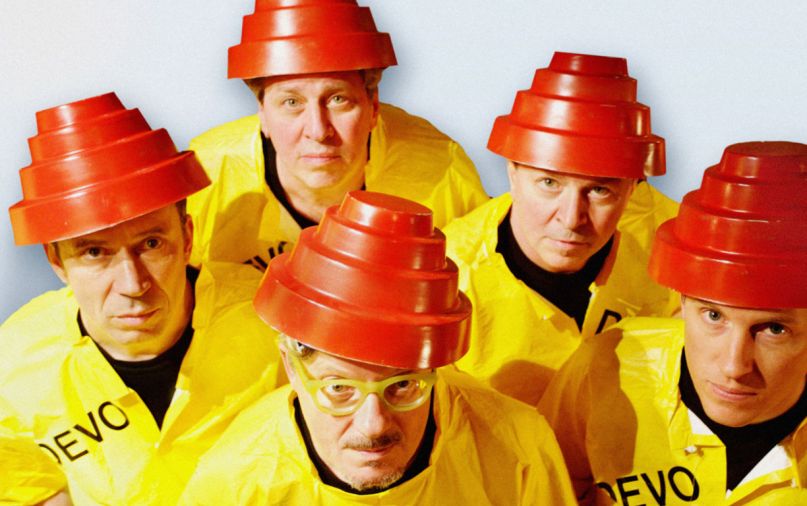 It’s almost a given that any listing of nerd rock bands will begin with a naval-gazing debate over semantics. I, however, am mostly uninterested in sussing out the finer points of what distinguishes a nerd from a geek, a dork from a dweeb, and so on. Like a game of Dungeons & Dragons, that could stretch on for hours.

“Nerd rock,” which began as a means of describing a laughably niche subculture, is now used to classify groups as varied as GWAR and The Decemberists. That’s to say nothing of the legions of wizard rockers, time lord rockers, twi-rockers, and other subgenres tied to specific works of fantasy or science-fiction. When we can’t even agree on what the word “nerd” means (still a sore subject for the Portland Nerd Council), how can I possibly suppose to present you with this list of 10 nerd rock bands you should know?

Easy — by establishing some ground rules and not thinking too hard about it. Since this week marks the 40th anniversary of Devo’s seminal nerd rock album Q: Are We Not Men? A: We Are Devo!, it makes sense to focus on bands that more or less followed in their path (that path being rock, punk, or new wave, vaguely).

That unfortunately leaves no room for the Chameleon Circuits and the Harry and the Potters of the world — artists whose entire raison d’être can be traced back to a single book or television series. It also excludes the nerdcore movement in hip-hop, led by rappers like MC Frontalot and YTCracker and enjoyed by nobody I know personally.

As befits a list with crate-digging intentions, I’ve also left out some of the more obvious touchstones in the nerd rock canon — your Weezers, your They Might Be Giants, your Mothers of Invention, etc. If you don’t see your favorite band among the following … congratulations! Your secret remains safe, and you’re probably a bigger nerd than the rest of us.

On that note, let’s take an intergalactic journey through the nooks and crannies of a particular kind of nerdom — the kind defined by loud guitars, infectious melodies, pop cultural minutiae, and a whole lot of unrequited love. Strap yourself in, because everyone knows seatbelts are for nerds.

When your band takes its name from a Princess Leia quote and goes on to compose the iconic theme music to Joss Whedon’s Buffy the Vampire Slayer … yeah, you’re probably a bunch of nerds. Thankfully, Nerf Herder belong to the most lovable caste of intergalactic dweebs, and their attraction to anthemic, three-chord pop punk is born in a desire to have as much low-stakes fun as possible.

And yet! Sometimes these dudes can be weirdly touching and wistful, such as when they’re lamenting the downfall of their favorite rock band (“Van Halen”) or reflecting on their glory days from the vantage point of middle age (“We Opened for Weezer”). There’s nothing elegant about singer/guitarist Parry Gripp’s nasally yawp, but I’ll be damned if it doesn’t do the trick when you need it most.

My suspicion that Canada harbors the world’s best nerds can be traced back to the first time I heard Moxy Früvous (what a name!) and their hilarious anti-love song “My Baby Loves a Bunch of Authors”, in which the protagonist laments losing his lover to the charms of William S. Burroughs and Gabriel García Márquez.

Everything about this band is equally ridiculous, and the deeper you dive into their catalog, the more they start to resemble a ragtag group of unself-conscious buskers you might run into on the subway on your luckiest of days. As bizarre, meandering narratives like “The Ballad of Cedric…” and “The Present Tense Tureen” all but confirm, these guys are nerds in the theatrical sense, lending their loud and distinctive voices to a world in which everyone else sounds kind of boring by comparison.

Nerds love esoteric shit, and it doesn’t get much more esoteric than a spooky surf rock group from Alabama with an unquenchable thirst for space-age science fiction. Generally, Man or Astro-man? attract new listeners with some of the same tricks you’ll recognize from Joy Division’s Unknown Pleasures: slinky, taut single-note riffs weaving their way through a sea of reverb. But the surf rock and sci-fi influences are strong with this group, and they have enough of a sense of humor to cover the Mystery Science Theater 3000 “love theme” and treat the theremin like a legitimate musical instrument. If you’re looking for a good entry point to their expansive catalog, the 1994 compilation album Destroy All Astromen! is your best bet.

Most nerds who’ve heard of Freezepop probably discovered them while tapping away at a plastic instrument on Guitar Hero … which sounds about right. A Boston-based electropop band that skews more electro than pop, Freezepop lean heavily on robotic synths and keytars to get their musical point across, which may be why their sound so instantly recalls the early- to mid-2000s, when you couldn’t throw your Game Boy without hitting a “video game” rock band. In any case, tracks like “Less Talk More Rokk” and the disarmingly vulnerable “Plastic Stars” steer clear of sounding too dated — that’s what a killer melody will do.

Once upon a time, Oakland’s The Phenomenauts might have been a fringe inclusion on this list. Their space-age rockabilly outfits and reputation for absolutely killing it live add up to something a little too cool for nerd rock, even if they hang their hat on songs with titles like “Space Mutant 4”, “Broken Robot Jerk”, and “Galactic Pioneers”. But then in 2016 they went and recorded a Neil deGrasse Tyson-themed 7-inch, and their fate as nerds was sealed as tight as the Voyager’s time capsule.

In all seriousness, though, no band on this list better embodies the spirit of nerd rock pioneers Devo. Even if The Phenomenauts continue to look forward — like, way forward — in the lyrics to their songs, they remain the standard bearers for a certain type of nerd rock genius that otherwise died alongside new wave.

New Jersey’s The Ergs! check off all the boxes you’d expect with a nerd rock power trio: thick glasses, humorous song titles, and an obsession with a curious piece of pop cultural ephemera (in their case, the 1998 Norm MacDonald comedy Dirty Work). And yet! It feels almost criminal to lump The Ergs! in with the usual bunch of four-eyed knuckleheads. Their raw talent demands a fairer shake, as does their peculiar blend of punk rock, a hodgepodge of influences blurring the line between experimental jazz and three-chord punk rock.

The group’s seminal album, 2004’s dorkrockcorkrod, is pound for pound one of the best punk records of the 21st century; the transition between the wild, raucous “Most Violent Rap Group” and the anthemic “Pray for Rain” is one of many musical tricks their peers simply couldn’t pull off. Unfortunately, you’ll probably never get the chance to see The Ergs! in action again, but look out for drummer/lead vocalist Mikey Erg plying his trade in the (almost) equally fantastic Worriers.

With song titles like “Hat Nerd” and “Nerdy Girl” and a sound somewhat reminiscent of Dead Milkmen, these guys never shied away from flaunting their bespectacled bona fides. (If memory serves, they also shared some show bills with another entry in this list, The Ergs!) But the best part about The Four Eyes may be that they never had those Weezer-size ambitions. Delightfully lo-fi and dumb, their music feels closer to true nerdom than a mainstream rock band could ever really get.

Did the world really need an entire concept album — much less several concept albums — dedicated to unearthing the dystopian splendor of the Mega Man video game series? The great thing about groups like The Protomen is they don’t ask dumb questions like that. They just go ahead and make the albums, which end up being wild, bat-shit crazy rock operas the likes of which no major music label or publication would touch.

That’s not such a bad thing, because music this ambitious and carefully constructed tends to find its audience. Even if you’ve never played a Mega Man game in your life, you owe it to yourself to take a huge bong rip and plow your way through Act I and Act II, the latter of which owes a huge aesthetic debt to the 1984 neo-noir Streets of Fire.

Even if you haven’t heard of Valley Lodge, chances are you’ve heard Valley Lodge — or at least 7 to 10 seconds of Valley Lodge. The New York power poppers struck paydirt in 2014, when John Oliver helped transform the riff from their single “Go” into the popular theme music for Last Week Tonight.

They’ve been riding on the coattails of the nerdy English Emmy winner ever since, but there’s a reason they caught his attention in the first place. As the group’s 2013 album, Use Your Weapons, showcases, their bubblegum appeal extends far beyond a single catchy guitar line. The hooks to songs like “Kiss Me, I’m Drunk” and “Waiting in the Rain” could only have been written by guys who don’t get outside all too often. Not that that’s a bad thing.

There isn’t much to say about Thundering Asteroids! that their name doesn’t already say in louder, bolder terms. Yes, this Portland-by-way-of-outer-space foursome rocks harder than a meteorite in orbit. And yes, their music registers as one continuous exclamation point, whether they’re stomping their way through literal anti-hero anthem “I Don’t Want to Be a Superhero” or waxing romantic about the star of the Scott Pilgrim graphic novels in “Scott Pilgrim vs. My Heart”.

Both of the above tracks fall within the broad strokes of what we generally expect from nerd rock, but it’s refreshing to hear a band that approaches this stuff from a less, well, male-centric perspective. As tracks like “Sexy Lamp” and the hot-for-Bowie “I’ve Got a Thing for the Goblin King” make clear, sexual desire isn’t a one-way street in this genre or any other.

Previous Story
N.E.R.D. to reunite at 2017 ComplexCon
Next Story
Why Curation, Innovation, and Location Are the Future of the Modern Music Festival
Popular
More Stories
[fu-upload-form form_layout="media" title="Submit Your Photo"][input type="hidden" name="ugc" value="1"][/fu-upload-form]