Billie Joe Armstrong says the band had no idea what had happened, adding, "We are not heartless people" 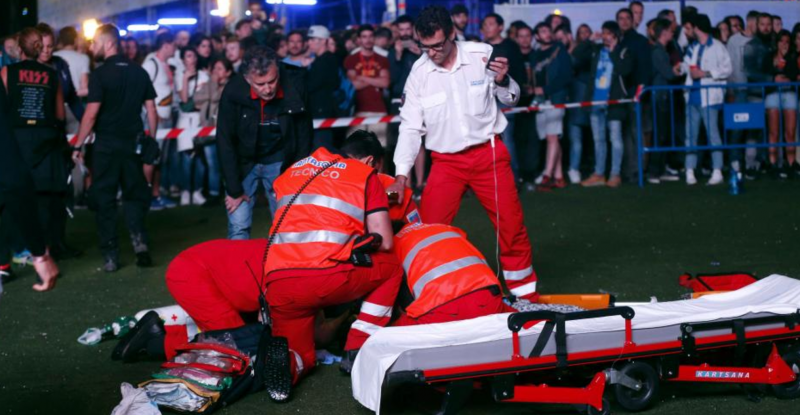 Photo via The Sun UK

On Friday night at Spain’s Mad Cool Festival, acrobat Pedro Aunión Monroy fell 100 feet while attempting a between-sets stunt and tragically died from his injuries soon after. Green Day continued on with their headlining set after a 30-minute delay, and many have wondered why the band made such seemingly insensitive choice. Today, in a statement posted the band’s website, Green Day frontman Billie Joe Armstrong explained the band’s decision, saying they were not told of the death until after they’d finished their set.

“Many of you are wondering why we continued to play our show after the accident. Green Day did not hear about the accident until after our show was over. We didn’t even know there was an acrobat performance at all. These festivals are huge. There are so many things happening at the same time it’s impossible to keep up with every performer/artist. We were in a back stage compound about a half-mile away from the main festival stage,” Armstrong wrote.

“We were warming up ready to go at 11:25 pm. 15 minutes prior our tour management was told by local authorities to wait to go on stage because there was some sort of security issue. Security issues are a normal occurrence and procedure at any show. We were NOT told why which is also normal.”

Armstrong is correct about the mayhem that is the backstage area of any major festival, so the question seems to be why didn’t the festival organizers let the band know that a performer had just plunged to his death in front of thousands of fans, something Armstrong wondered himself in the statement, writing, “All of us were in disbelief, I don’t know why the authorities chose not to tell us about the accident before our concert. All we know is what was said after our concert. This has never happened in the 30 years Green Day have been performing live. If we had known prior to our performance we most likely would not have played at all. We are not heartless people.”

The singer wrote in conclusion, “What happened to Pedro is unthinkable. Once again we are heartbroken for his friends and family. We are also shocked and heartbroken for anyone that had to witness this tragedy.”

The Madrid-based festival’s organizers have also shared a statement in attempts to explain their thinking after the tragedy, saying in part, “Mad Cool Festival complied with all the corresponding security measures that are mandatory for the audience, artists and workers at festivals and was prepared for all eventualities. In this situation it was officially deemed unsafe to have a large mass of people moving all at once, with the possibility of violent reactions, due to a sudden cancelation of an event of 45,000 people. The safety and security of the fans at the festival was of the highest order and it was not compromised.”

Our condolences go out to the family and friends of Pedro Aunión Monroy. RIP.