Film Review: War for the Planet of the Apes 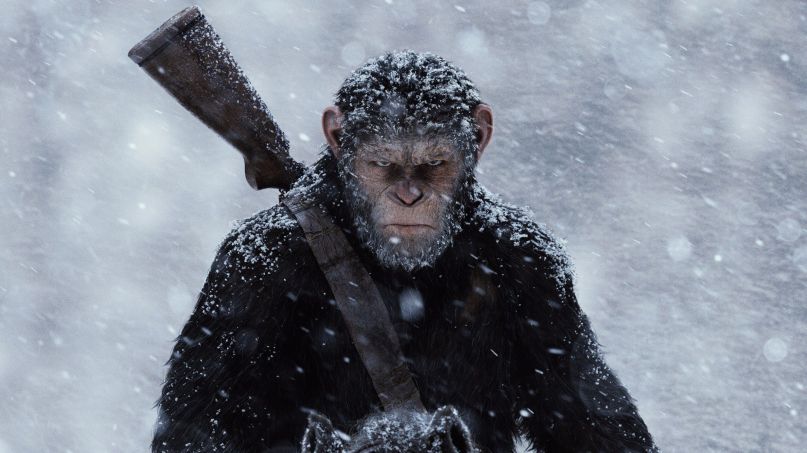 At some point, the balance of our planet turned, and everything down to the title of War for the Planet of the Apes makes this abundantly clear. Where Earth was once a human planet, and the time of apes rose and dawned, now the tide has shifted. Now humanity must affirm itself against a civilization sliding away from it by the day. If the first two films argued for mankind’s inability to restrain itself from pursuing a final reckoning, this is a film about what happens when mankind gets everything it asked for and more still. This is no longer a planet of humans, it is a planet of apes. Each encounter simply inches both species further beyond the rubicon they’ve already crossed.

War for the Planet of the Apes is a bleak summer blockbuster even by the increasingly nihilistic standards of the last two installments. One film envisioned a world in which humanity’s desperation to stave off old age begat something dangerous, and then another saw man blow past a series of final exits on its way to obsolescence. Much of humanity has perished by the time the film begins, and the majority of those remaining have been driven mad by survivalism, enlisted into military tribes of ape hunters. Where the apes once lived in fear of humanity, now humanity lives in fear of its own future.

In this same way, Caesar (Andy Serkis) worries about what will come of the apes. Mankind’s numbers may be dwindling, but their desperation has made their armies vicious. Even at the beginning of War, Caesar still attempts to reach some kind of armistice, knowing how futile his attempts will likely be. When a squadron of humans moves hazardously close to their long-held encampment in the woods, Caesar sends them away with a clear warning: “Leave us the woods, and the killing can stop.” But for The Colonel (Woody Harrelson), there is no end as long as a single ape continues to walk the Earth. Soon the bloodshed of so many battlefields follows the apes home, and Caesar is forced to deal with the displacement of his kin, and the violent road to any future they might have.

The terror of Planet of the Apes as a concept was always borne from man’s anxiety about its end. From its birth during Vietnam to its post-apocalyptic echoes of a nuclear holocaust, the series has long been rooted in the possibility of man destroying itself as a matter of natural course. War takes that concept to its logical ends, but one of director Matt Reeves’ many bold choices (alongside co-writer Mark Bomback) is to frame much of the pivotal human drama in the film’s background. There are only two notable human characters in the entire film, and one of them is Harrelson’s Colonel, a Kurtzian type who believes that humans as they once existed cannot peaceably coexist in a world with the evolved ape. The other is a young girl, Nova (Amiah Miller), who’s been left silent by forces that War takes its time in teasing out.

This is a patient film, so much so that War feels nearly radical by modern Hollywood standards. As with Dawn, the apes’ preferred communication mode of sign language allows for Reeves to build the film’s power out of conspicuous quiet. When the film spends extended periods of time unfolding its tale with little (spoken) dialogue, the remarkably acute sound design lets the auspicious presence of silence dominate the mix. Where once the sounds of ape-human strife could be heard off in the distance, or dominated the screen, Reeves imagines an emptier world, where the absence of death and the accompanying vacuum of sound fosters its own kind of dread. Accordingly, when fighting does arise and the film grows more hectic, it’s all the more deafening for Reeves’ keen manipulation of these dynamics.

Even the new introductions have an aura of sadness around them. Nova is only discovered in the wake of tragedy, and her kindness to the apes is understandably returned with a mixture of empathy and looming unease. Bad Ape (Steve Zahn) offers another perspective on the war, from an ape left to fend for himself without the close-quarters decency of Caesar’s tribe. That he’s rattled to the point of constant alarm is hardly surprising, although Reeves finds a handful of lightly comic moments out of the character throughout. Those are few and far between as the film goes on, however, given that Caesar eventually finds himself captured and pulled behind enemy lines, along with the majority of the remaining apes. His torture and suffering there, compounded by his guilt over his necessary slaying of Koba (Toby Kebbell) in Dawn and the us-or-them reality of the ongoing situation, forces Caesar to question what more he can possibly give to save himself, and his kind.

The thoughtful continuity between films plays another notable role in War’s unsettling portrayal of a conflict’s waning days. Central to Caesar’s arc in this film is Serkis’ continuously astounding work in the role; whatever debate might have remained about the actor’s role in the series’ boundary-pushing motion capture work should hopefully be laid to rest here. Caesar is not just a marvelous creation of special effects (the work on his and the other apes’ design, by Weta Digital, remains groundbreaking), but a character who’s evolved from the star child of a dominant new species to one of the last beings on Earth capable of remembering mankind’s onetime decency. Much of that complexity emerges from Caesar’s gaze, and it’s not ultimately a VFX who finds it. It’s Serkis, and his work here is as powerful as any he’s done.

Like any great villain, this ethos is mirrored in the Colonel, who has more than enough reason to fear what might come next. War for the Planet of the Apes may be part of a trilogy that’s always taken a sympathetic stance about man’s treatment of the apes, but Reeves introduces a moral conundrum that asks far more difficult questions than before. At what point can two opposing groups truly fail to coexist? What is the morality of one being’s survival over another? Can there be morality in a binary life-or-death scenario? Harrelson plays him as a man who abandoned such questions and answers long ago, who’s chosen the brutal simplicity of genocide or extinction. His fear is real, and this makes it all the more palpable. If the actor has played roles like this one before — blithely deadpan in the face of the unimaginable — Harrelson nevertheless lends the Colonel a tremor that seethes under his crueler moments. He’s a man who chose to accept savagery out of necessity, and expects no less than the same from those following him.

The most remarkable accomplishment of War, then, is how the film seeks to articulate both sides as clearly as it can. Reeves visualizes the waning human world as a despairing progression of hiding places and mercenary strongholds, where the apes fret about where a migration would even take them and the humans cling to their last bolstered prison encampment as tightly as they can. Caesar is forced to endure the worst of one species to protect another, and the combination of Serkis’ resonant work and Reeves’ unflinching direction cement War as one of the more thoughtful and unyielding blockbusters of its time.

As with the previous films, Caesar’s entire mission is defined by the idea that all beings have a right to live, and live well, and that someday they will. Here it’s reflected in Bad Ape’s daffy commitment to goodness, or in the apes’ protective kindness toward the Nova. (One of the film’s loveliest scenes features one of its only vibrant swatches of color, as she shares a flower with one of her protectors.) But it’s also a film with an astute understanding of how cancerous vengeance can be, and how even the best among us can act hideously when pushed to the limits of anger and need. In its way, War also makes a painful case for how avoidable inter-faction violence usually is, and how quickly that’s forgotten when such violence erupts.

Reeves and cinematographer Michael Seresin juxtapose the purity of the vibrant white snow surrounding the encampment and the exhaustion of the gunmetal-dark human territory to breathtaking effect. The film’s color palette may be muted, but War is an impeccably shot film, the uncanny CGI fitting perfectly against the film’s unforgiving environments. At times the production design is truly eerie, suggesting a world where man exhausted itself and was slowly, quietly replaced. Between the lustrously shot expanses of untouched land and Michael Giacchino’s nervous, sometimes dominant score, War builds a world made frightening by its absences.

The humans are so ultimately secondary that some of the film’s only questionable narrative decisions have a diminished impact. A good bit of the film’s prison section is built upon some suspect-to-unlikely human decisions and errors; for a legion of futuristic Marines, they’re inept as prison guards to the point of audience distraction. That said, even the panic and indecision of the soldiers can still be tied into into War’s thesis about scared, under-trained warriors who never asked to be placed in their position. Regardless, War has predominantly moved beyond its human characters, for better or worse. (We’ll argue it’s the former.) Wartime has no true victors, and War never cheats on its established stakes, and those of the series to date, by attempting to comfort its audience.

War for the Planet of the Apes is a formidable conclusion (if indeed it is) to one of the more well-considered modern series to date. This is a film of difficult, lingering questions and painful revelations. Beyond that, it’s also a film where a beloved CGI creation is tortured onscreen for dramatic effect. This is pop filmmaking nearing its darkest heights, but verging on its artistic heights as well, a movie that will undoubtedly have its place as long as two nations somewhere around the world are struggling over land or hubris or, as it is here, to endure. It treats the end of the world as the apocalypse we’ve always been racing ourselves into, and the one we won’t be able to prevent even as we see it coming. Yet there is still always another way forward, no matter how much blood is shed. There’s always a new horizon, and a new tomorrow. The only question, then, is how many get to see it.