The Kickback – Weddings and Funerals 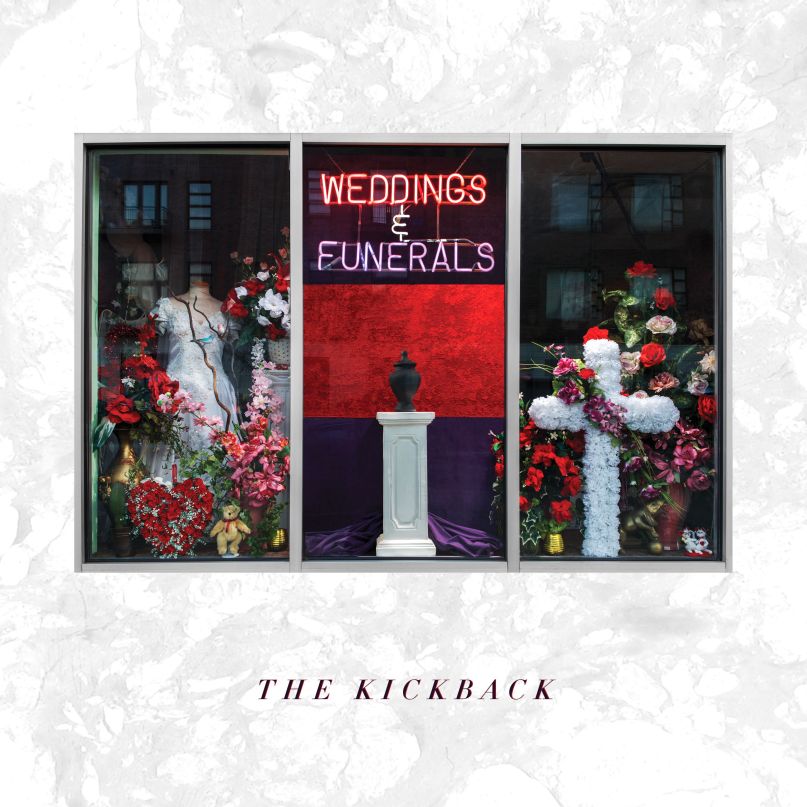 “I was working through some shit.” That’s what Billy Yost told Alternative Press after trying to explain the origins of a song that’s likely better off not being explained. After telling them that “Rube” was inspired by Don DeLillo’s depiction of Lee Harvey Oswald in Libra, he goes on to dub Oswald “a fucking dunce machine” before name dropping a Chicago Jewel-Osco grocery store and imagining a woman “filled with lust and rage” who “starts poking holes in all the soup cans.” There’s a discernible narrative there somewhere, I’m sure, but it’s not for us to connect those dots—there’s a warped, singular logic to the grieving mind.

And, if its title is any indication, Yost was most certainly grieving when he and the rest of The Kickback were writing Weddings & Funerals, the sophomore LP from the rising Chicago rockers. In the same interview, he describes it as a “one-sided view of someone trying to work through a divorce,” and elsewhere he’s mentioned the difficulties of his own recent marital split. So, yes, this is a break-up record, but as the above anecdote makes clear, Yost’s peripatetic mind doesn’t lend itself to traditional lamentations. That’s a good thing.

The band’s debut, 2015’s Sorry All Over the Place, crackled with pent-up anxiety, but, despite the darkness that gave birth to its follow-up, Weddings & Funerals resonates as something much more upbeat. Now, upbeat doesn’t necessarily mean “happy”—the tone of Weddings & Funerals is probably best described as “eccentric.” There’s a manic quality to the songs, the sense that Yost is ping-ponging along a spectrum of emotions as complementary as they are disparate. You can hear it in the instrumentation—the band’s guitar-heavy power pop routinely surprises with out-of-nowhere laser blips, bursts of violent distortion, and, on “I Taste My Own Blood”, a mournful organ that punctures an optimistic bridge to expose the melancholy swimming beneath its surface. No single, quantifiable emotion carries any of these songs; the lyrics and tone are often fittingly contradictory.

Take opener “Will T”, which kicks things off with an appropriate burst of sarcastic laugh-sobbing. Yost told Billboard he started the song as a teenager, but finished it after his divorce. “I was pretty sure that I didn’t deserve to be loved and wouldn’t be able to find happiness in a relationship,” he said. “After I got divorced, I came back to it because — one way or another — I set myself up at 18 for what played out a decade later.” The absurd reality that one could emerge from a failed marriage with more or less that same sense of youthful self-loathing is one anyone who’s suffered a long-term breakup can understand, and Yost approaches it in the only way one can and still retain their sanity—with the strained, choking laughter of disbelief.

One of the album’s most disquieting tracks is also one of its shortest; in “Dating Around”, Yost allows himself to reveal that, “I hear you’ve been fucking around/ Is it something familiar?/ Something familiar?/ I hear you’re dating him now.” Its brevity is telling; the reality that an ex has moved on is nothing anybody should confront for more than two minutes. He saves the real bloodletting for “Latest Obsession”, the album’s emotional, chaotic closer. In a lyric that should pierce the calluses of every scarred heart, Yost sings, “Every time you said it’d be all right / I should’ve realized you talk to yourself at night.”

Sarcasm is a much safer space. Sarcasm, after all, is its own kind of salve in the wake of a tragedy. We have to exaggerate, to mythologize and delude. To what extent you believe yourself depends on the day. We hear it in “Will T”, as well as “Vision Board” and the desperate “Hotel Chlorine”, which finds him longing for a new voice and smile before offering himself up as a slave. Then again, he sounds endearingly earnest when he urges that “it’s not the end” on “False Jeopardy”, and it’s easy to believe him on the anthemic “Reptile Fund” when he says he’s “got it made.”

That’s the story the hooks tell, after all. Weddings & Funerals is a relentlessly catchy record, brighter, tighter, and more focused than the band’s debut, which sometimes felt as if it were grasping in too many directions at once. Producer Dennis Herring likely had a hand in that; as he’s proven through his work Modest Mouse and The Hives, Herring knows how to streamline a band’s sound without sacrificing the off-kilter energy that makes them great. And Weddings & Funerals sounds great, with riffs as sharp razor wire and pronounced percussion that rattles the heart.

And its heart that lies at the center of this record. A bloody, dumb, confused one that’s teaching itself how to pump again in the absence of what it thought was its raison d’etre. This is the sound of working through some shit.