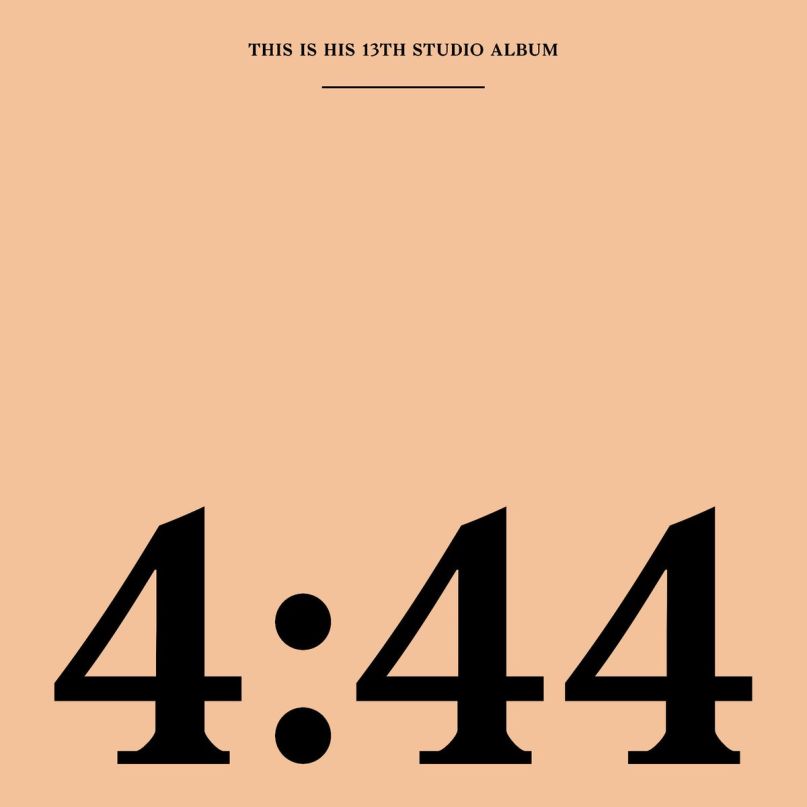 It feels completely bizarre to say that the biggest rapper of all time has only just now at age 47 released his most lyrical album ever — this being his 13th official album and 18th if you count his collaborations with MTV Unplugged, R. Kelly, Kanye West, and Linkin Park. But the biggest rapper of all time wouldn’t be ordinary in the slightest, and this one’s a friend of sorely missed president Barack Obama and married to Beyoncé, probably the most fervently beloved pop artist in America. In fact, Beyoncé also made 2016’s most discussed (and also fervently beloved) album, Lemonade, and it just happened to largely concern her husband’s insinuated infidelity. So, there’s no way 4:44 was going to be normal no matter what it sounded like.

JAY-Z’s last album was Magna Carta… Holy Grail in 2013, minus the hyphen but embracing all caps, and it wasn’t his best by any means. But it did have one crucial quality. On songs like “Picasso Baby”, Shawn Carter discussed his wealth in familial terms, letting his new daughter, Blue, lean on a recently purchased Basquiat painting because she owns it. This was a discussion of the man’s acquisitions and power in downright tender terms, examining his rise on a level that few other careers in the same genre ever thrived long enough to approach. 4:44, amazingly enough, is an entire album that zeroes in on that incredible theme, the link between money and family.

To be clear, JAY-Z examines wealth under every lens on 4:44: race (the mogul longs for the gentrified Property That Got Away on “The Story of O.J.”), posthumous exploitation (Prince’s estate gets theirs on “Caught Their Eyes”), and his own posthumous funds (the self-explanatory “Legacy”). On the amazing “Moonlight”, he brings up Lauryn Hill’s tax evasion as Kendrick Lamar once invoked for Wesley Snipes, as the “Fu-Gee-La” beat is interpolated behind him, with another verbal in-joke about black people being “stuck in La La Land” to play off the Oscar metaphor of the song title. Even though it’s only 36 minutes long, 4:44 is the first JAY-Z album where you’re hanging on every single word from start to finish, because the words have about four times as many meanings as they did on any of his dozen solo albums prior.

It’s only fitting that a fellow multi-generational hip-hop architect, No I.D., produced the entire record, sporting a pedigree that includes Common’s 1994 breakthrough, Resurrection, Kanye West’s two most game-changing albums (808s and Heartbreak, My Beautiful Dark Twisted Fantasy), and most recently, Vince Staples’ steely, claustrophobic Summertime ’06. So the beats paired with Mr. Carter here are thoughtful, abstract, and most importantly, beautiful. They’re often built on skeletons of expensive soul samples by Nina Simone or Stevie Wonder and further cut up into arresting shards for the master of ceremonies to interact with, yet they don’t distract from his astounding evolution towards an echelon of wordplay that matches his younger self’s precision while refusing to conceal his feelings or his responsibilities.

Opener “Kill Jay Z” (no hyphen there, weird) owns up to just about everything upfront — “You’ve got people you love you sold drugs to,” shooting his own brother, stabbing Un Rivera at a Q-Tip album release party in 1999, and even taking ownership for Solange Knowles’ infamous assault of him in an elevator. Then there’s the cheating, where he pauses (“I don’t even know what else to say”) before contrasting his own iconic wife’s situation with that of Halle Berry’s and smacking himself upside the head (“Never go Eric Benet!”). It’s this tune and the literal centerpiece, “4:44”, raising the most eyebrows because they confirm Lemonade to be true and because the old hound shows us a side of himself he’d never bothered with back when he was fucking women at 6 a.m. and kicking them out at 6:15. “4:44” is a plainspoken collection of apologies of the same length, not just to Beyoncé (in whom he personifies an Isley Brothers reference) but to all the women whose emotions he’s “played with.”

But there’s just so much more to this amazing record than a Lemonade response. This is a world-class JAY-Z State of the Union album, full of heavy burdens (“Rich nigga, poor nigga, House nigga, field nigga” is a chant he cycles through several times on “The Story of O.J.”) and lightweight puns (“eyeful”/”Eiffel” is a fave). There’s just so much invaluable verbiage here: “I told ‘em please don’t die over the neighborhood,” “Financial freedom my only hope,” “He was preaching on Sundays versus how he was living Monday.” Plenty of times he sounds like a grouchy, old man compensating for his past (“You wanna know what’s more important than throwing away money in the strip club? Credit”), and he makes that worth hearing, too. At one point, Frank Ocean sings the word “solipsistic.”

That “financial freedom” bit is the key to the whole record, as every fiscal koan here translates to F-A-M-I-L-Y as his ultimate justification for everything, though it obviously isn’t. It’s fascinating to hear a real-life Walter White rationalize his every dealing that way, though, in stanzas like, “I bought some artwork for one million/ Two years later, that shit worth two million/ Few years later, that shit worth eight million/ I can’t wait to get this shit to my children/ You think it’s bougie / I think it’s fine.” And No I.D. matches every lyric with an appropriate musical backing, building beneath that verse with accelerating drum fills. Nina Simone’s Randy Newman-composed “Baltimore” is turned into the covert ska of “Caught Their Eyes”, which is funny because parts of this meta benchmark are like his “I’m Dead (But I Don’t Know It)”.

“Family Feud” is home to many of the album’s best lines (“There’s no such thing as an ugly billionaire/ I’m cute,” “Al Sharpton in the mirror taking selfies/ How is him or Bill Cosby supposed to help me?”) that vie for the spotlight with an infectious soul-choir sample and Beyoncé’s ad-libs and embellishments. “Family”, on this record, extends to mean his nearly lost marriage and his brotherhood with Kanye West, who gets a full-on intervention on “Kill Jay Z” and the most microscopic subliminals on the Damian Marley-assisted “Bam”, which play off the “I hit the gym/ All chest no legs” bit from West’s “30 Hours”. Decoded, indeed. Further fueling the blaze is the loop of Sister Nancy’s “Bam Bam” behind the most aggressive track on the album, also sampled by Kanye for last year’s tempestuous “Famous”. You could guess whom “Stop walking around like you made Thriller” concerns, too.

The fluency of No I.D.’s track-by-track soulcopia leaves barely a space where “4:44” ends and “Family Feud” begins or, for that matter, “Moonlight” turns into “Marcy Me”. The producer’s best moment of many may be the shish-kabobed Stevie of the elegant “Smile”, though, which doubles incredibly as a coming-out party for JAY-Z’s mother, Gloria: “Mama had four kids but she’s a lesbian/ Had to pretend so long she’s a thespian.” Mother Carter herself appears at the end of the track, for a cameo GLAAD has already commended. This album’s just about so many things, and yet all of them boil down to family, even his tough love for Kanye and harsh judgments for the Prince estate (“You greedy bastards sold tickets to walk through his house/ I’m surprised you ain’t auction off the casket”). Ultimately, the closing “Legacy” leaves his built-from-scratch empire up to his three children in one perfectly poignant couplet: “Legacy, legacy, legacy/ Black excellence baby, you gon’ let ‘em see.”

Yes, there’s the sour rhetorical question about why Jewish people “own all the property in America,” the regret about letting someone else gentrify DUMBO before he could, the line about feeling like the tallest midget that he quickly defuses as politically incorrect (“forget it”). 4:44 is a breathtaking cycle about a man wrestling with his moral failings in real time, not always winning, trying to live his Mondays closer to what he preaches Sunday as he prepares for 50 (and not 50 Cent, whom he dispatched before we’d even heard of him). In 10 years, we may even call it JAY-Z’s best album, maybe fewer. It’s certainly the most he’s ever had to say. And no rap album has ever had more to say about money. To put it mildly, that’s saying something.