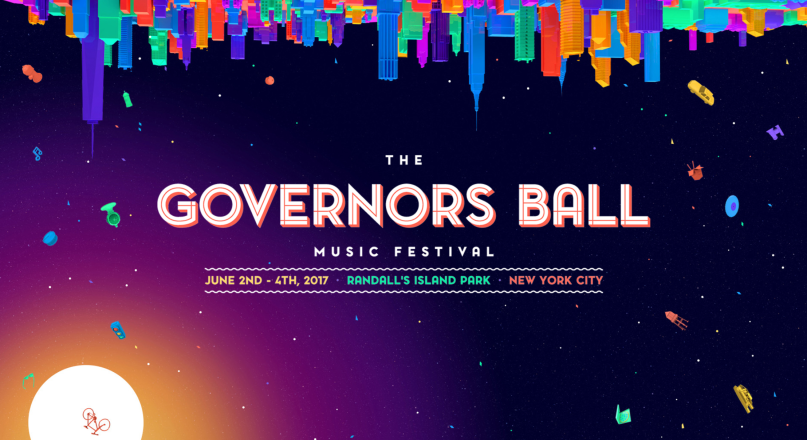 There’s a war raging in New York City as we speak; more specifically, an arms race, where the stockpiles are sonic and the weapon is celebratory. I’m referring, of course, to the ongoing battle between festival organizers to give America’s most populous city a festival worthy of its alpha status — the East Coast’s very own Coachella. Governors Ball, a weekender held each year on Randall’s Island in Manhattan since 2011, was early to the battle. Six years later, its organizers face more competition than ever, specifically next month’s Panorama. Though this year’s Governors Ball fell short of a successful bid for the throne, the ambition’s never been clearer and the crowds never larger.

That festival organizers all over the globe tightened security measures significantly in the wake of last month’s Manchester Arena bombing had a negligible effect on the weekend’s atmosphere as a whole. Most of the fuzz – and perhaps a little more baffling, the parents – stuck to the perimeter, leaving the kids to enjoy their dirty dancing and fried mac-and-cheese balls in peace. With the mercury holding fast to the ‘70s and the inclement weather of Governors Balls past mercifully absent (except for some scattered showers Sunday afternoon), spirits remained high, buoyed further by the happy-go-lucky signs scattered across Randall’s Island, closer to towering cheerleaders than concert decorations. One of ’em simply read: “You’re doing great!”

Modern festival lineups are basically hopscotch grids: stylistic and experiential spectrums colliding and diverging by a bacchanalian clockwork that, all too often, dissolves into an amorphous din. Fortunately, Governors Ball’s top-notch sound system and staggered schedule kept audio bleed to a minimum, upholding the integrity of the weekend’s more involved, texturally rich palettes: from Beach House’s wispy shoegaze jams to The Avalanches’ lush plunderphonics to Tool’s labyrinthine prog-metal, presented in sinister high definition with a foreboding light show to boot.

Aside from lending frisson to the music itself, Governors Ball’s stellar production compensated for the marquee’s orthodox roster, a perfunctory assemblage of affable indie bands (Phoenix, Local Natives), millennial whooping crews (Cage the Elephant, The Strumbellas), viral rappers (Logic, Danny Brown), artful R&B vocalists (Tove Lo, Kehlani), dance groups (Phantogram, Flume), and most importantly, any ‘90s legacy acts that happened to be functional and unjaded enough to grace the main stage (Tool, Air). Just like tomatoes on a summer vine, touring festival acts are best enjoyed at the beginning of the season, before the days get miserably hot and the road fatigue creeps in; Governors Ball’s early June timing hermetically sealed that early summer giddiness, offsetting the déja vu.

That’s not to say there weren’t some unique moments, primarily of the collaborative variety. Lorde’s stunning main stage performance featured an ebullient cover of Robyn’s “Hang with Me” with Jack Antonoff, whose indie pop band, Bleachers, took the stage earlier in the evening; bubblegum impresario Charli XCX brought out eccentric rap darling Cupcakke while Marshmello’s surprise guest list included fellow EDM artist Slushii and a toddler known as “Mini Mello,” who hyped up the crowd dressed as – you guessed it – the helmeted DJ himself.

While we’re on the topic of youngsters, teens absolutely dominated the crowd at Governors Ball 2017 – expected consequences for a star-studded festival taking place at the end of the school year. Lorde may have been their patron saint; they erupted into cheers during her wistful introduction to “Ribs” (“This next song I wrote when I 16”), galvanized by the knowledge that their idol was one of them not too long ago (and very well may still be). Phoenix’s headlining set Saturday night was modest by contrast, particularly after “Lisztomania”, when they staged a spontaneous exodus to Childish Gambino’s free-wheeling funk party; those who stuck around for the French band were rewarded with a tight greatest-hits run, as well as a taste of their anticipated new album, Ti Amo.

By Sunday night, the generation gap had widened into a chasm. The Tool acolytes fanned out in front of the main stage, passing around joints over heated setlist speculation; most fans aged 21 and under opted for Wiz Khalifa’s smokeathon across the field, undoubtedly a tad freaked out by the surly weirdos who’d suddenly descended upon the grounds to rant and rave about Maynard James Keenan. “I can’t find any Tool songs on Apple Music,” muttered one girl to her friend, bewildered. “Who are they?”

Everyone over by the main stage certainly knew who Tool was. After all, Sunday’s festival-closing set (which was devoid of new music, instead drawing heavily from Ænima and Lateralus) marked the prog-metal legends’ first area appearance in over a decade. The band didn’t disappoint, storming from one polyrhythmic mind-melter to another as Keenan glowered in the shadows from the back of the stage. He didn’t speak much, except to encourage political unity in his usual, cynical way. Shortly before “Opiate”, he rattled off a list of politicians and news outlets – Trump, Fox, Huffington Post, Breitbart – before proclaiming: “None of these things are your enemy. Your enemy is ignorance. That’s the fight.” Have at it, progressive Twitter.