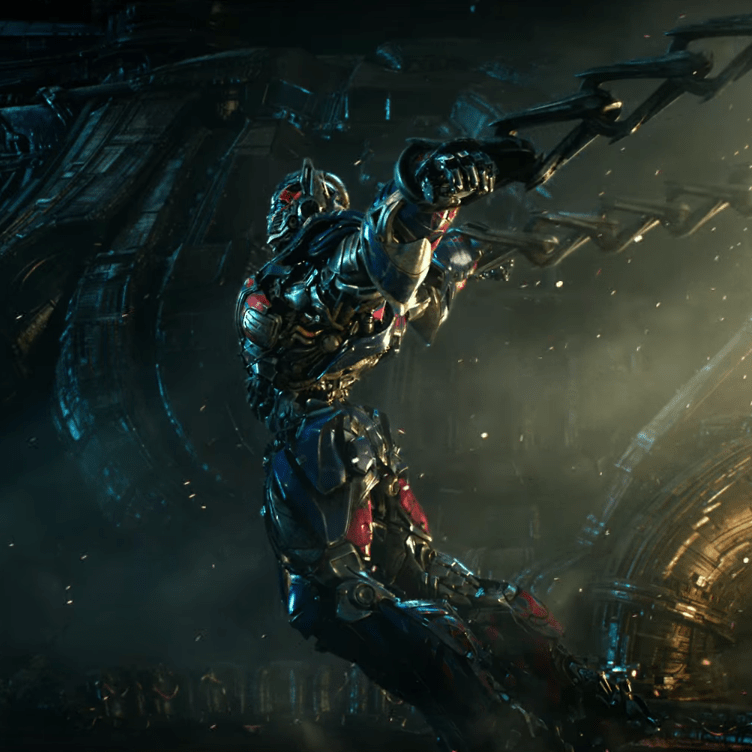 In the early minutes of Transformers: The Last Knight, Michael Bay jumps his film from the Dark Ages in England to a shot of a stiffened, seemingly dead Optimus Prime drifting through space on his way back to what remains of Cybertron, his home planet. The 1,600-year jump, combined with the image of a monolithic being, recalls the iconic opening of 2001: A Space Odyssey, and the moment in which Stanley Kubrick forever altered the visual language of film to condense centuries of human existence into a single cut. Two entries in the Transformers series ago, this might’ve been an outrageously bold maneuver, the kind of jab at his critics that would’ve reignited the internet fervor against Hollywood’s most populist filmmaker. As it stands, though, it’s merely one in an endlessly long line of showy visual displays that ends up amounting to virtually nothing by the time The Last Knight finally exhausts itself.

Dragging Bay has become something of a pastime for film writers and enthusiasts; no longer just reviled by the snobs, the director’s trademark bombast has become a cultural shorthand for the worst of empty, casually offensive, and deafening American filmmaking to such an extent that Pain & Gain is now considered a brilliant work of auteur deconstruction in some circles. But it’s an interesting read considering how fundamentally unlikable most of Bay’s work has become, and The Last Knight offers few exceptions to the rule. Not even the film’s three credited screenwriters (along with Winter’s Tale director Akiva Goldsman and his story credit) can bring life to a movie in which sentient robots ride robot dinosaurs into an apocalyptic battle while a planet crashes into Earth, which should tell you just about everything you need to know on the topic of The Last Knight.

If you’re interested in a few hundred more words, however, it’s easy to wax nihilistic for hours about the film’s many, many shortcomings. After Age of Extinction laid waste to Hong Kong, Optimus Prime (Peter Cullen) has left the planet on a sojourn to his home, to meet his true maker. There, he finds Quintessa (Gemma Chan), an omnipotent being who promises the restoration of Optimus’ beloved Cybertron. What she neglects to mention is that Earth was once known as Unicron, the lost continent of Pangaea was originally a landing beacon for a second planet that would absorb Earth into itself, and her plan chiefly involves flying one planet into another to destroy it and claim its resources. To enlist Prime in the cause, he’s brainwashed and turned into Nemesis Prime, destroyer of all human life.

However, in case you actually start to care about this at any point, The Last Knight spends long stretches of its runtime completely forgetting about this plotline, and most of its others, whenever its interest wanders. The film also catches up with Cade Yeager (Mark Wahlberg), who follows in Shia LaBeouf’s footsteps by having his life torn apart as the result of helping the Autobots save the world. He lives in a junkyard, unable to talk to his daughter as a fugitive. (She calls him, though, because these movies exist in a vacuum of irony where series continuity can be quite literally phoned in.) The remaining few Autobots keep him company, and he lives in seclusion with his “employee” Jimmy (Jerrod Carmichael, as underserved as comedians in Transformers movies usually are).

Cade’s solitude is interrupted when he rescues Izabella (Isabela Moner), a 14-year-old survivor of the last two films’ Chicago attacks who refuses to abandon her home, until she does so entirely to follow Cade around while waiting for the plot to happen. (Moner is fine in the part, but the character outright disappears for an inexplicably long stretch of the movie.) He also collides with Vivian Wembley (Laura Haddock), an English antiquities professor whose knowledge and bloodline could prove a difference-maker in the endless Autobot-Decepticon war, despite her initial oil/water reactions to Cade. When the film inevitably shoves them together for the romantic subplot these overstuffed films favor so much, the actors’ chemistry forms the kind of black hole that could swallow a planet. Josh Duhamel returns as his seasoned, robot-fighting colonel, who’s working undercover to infiltrate an organization that reads like an anti-robot riff on the border-crawling Minutemen. Oh, and this seems like as good a time as any to mention that the film occasionally flashes back to the Dark Ages throughout as well. And that John Turturro’s still around, making expository phone calls from Havana because movies can now be filmed in Cuba again.

For all of the flashbacks (including one in Nazi Germany that garnered a remarkable amount of bad press for 30 seconds of screen time) and the convoluted storytelling, The Last Knight is far more interested in belabored action setpieces than it is in any of its running threads. These films are a technological exercise above all, and if only on that level, it’s an impressive enough display of Paramount Pictures’ millions. Even the non-IMAX digital 3D impresses, although the film largely uses this in service of flinging constant debris at the audience and forcing a never-bluer Bud Light into the foreground. And when it’s time for the world to end, on and around Stonehenge, Bay turns the action up to wall-rattling levels in every sense. Nobody’s ever accused the man of incapably staging a visually impressive scene, if that’s your sole criterion when assessing a movie’s quality.

By most any other metric, The Last Knight is just the latest in a running series of sense-dulling failures, now in its tenth year and with no seeming intention of stopping. While the flagrant product placement is dialed back (at least on Bay’s curve) and there’s mercifully 100% less discussion of sexual consent laws this time around, the latest outing suffers from arguably the most fatal flaw a movie about giant fighting robots can: it’s brutally and relentlessly boring from start to finish. Even Anthony Hopkins, who gets top billing as Sir Edmund Burton, struggles to shove any sort of a sense of momentum into the proceedings. As the eccentric, aristocratic keeper of sentient robot history, the venerable actor manages a handful of enjoyably weird line readings, but he’s just another cog in a tedious machine. For all the time The Last Knight spends on humans delivering long-winded exposition to other humans, the movie doesn’t seem genuinely interested in a single one of them.

Whatever sense of wonder might have once accompanied the base premise of “car aliens” is long gone by now, with launched deep-sea spaceships and the aforementioned planet collision and the theft of a decommissioned submarine all coming and going without leaving any lasting impression. (It’s a banner year for submarine action, though, between this and The Fate of the Furious.) Optimus Prime gives himself over to his darkest impulses, and you’re left to sit wondering how much time the film will spend on spinning its wheels before the film gets around to walking this bold departure back. Much is made of the Staff of Merlin and a talisman that attaches itself to Cade, but they’re just two more Macguffins in a series almost entirely built on them. The Last Knight is definitive proof, if nothing else, that all the noise in the world can fail to make a real, lasting sound.

There’s a lot more time and ink to be spent on charting the film’s many other glaring woes, from the comically dated sexism flung at Haddock every few minutes to the number of plot points either reshaped or outright culled from previous installments. But as the series’ deafening sensibilities don’t even seem to have a purpose anymore, at least outside of sustained commerce, it almost seems beside the point to rake it over the coals any further. It’s a huge pile of money, lit on fire for the entertainment of audiences who don’t mind settling for less, in service of amassing another one to light in three or four years’ time. The CGI is still incomprehensible, the characters are still paper-thin, and it’s a movie that even manages to reduce magic itself to the trickery of ancient machines. It’s not necessarily the worst of the series, but it’ll likely go down as the least memorable to date. Depending on where you stand, that might be the most unforgivable trait of all.