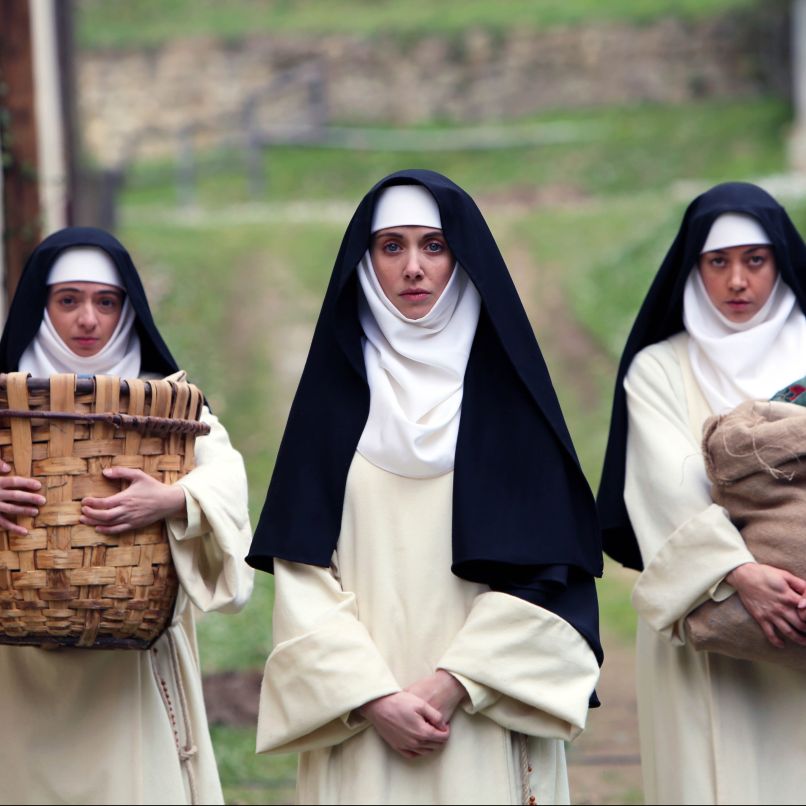 As comic adaptations of Giovanni Boccaccio’s The Decameron go, The Little Hours takes a modern approach to one of the many vignettes from the classic Italian novella collection. Based on the first story from the volume’s “third day” (as The Decameron chronicles the stories told among ten people hiding in seclusion from the Black Death), Jeff Baena’s odd comedy tells the story of a convent in Gartagagna circa 1347, and the schisms that arise between the younger nuns when a handsome drifter enters into their daily lives. In one sense, it’s proof that classic literature can translate into any time period; it’s not as though stories of carnal desire and repressive patriarchy are particularly new. In another, Baena’s approach is so winkingly bawdy that it can be read either as a goofy tribute to one of the world’s oldest sex comedies, or an especially sophomoric take on the same.

Life on the convent is pastoral, and as idyllic as it is frustrating to its young charges. Alessandra (Alison Brie) does meticulous needlepoint work and gazes endlessly out the window, imagining different and more satisfying lives. As she waits for a marriage opportunity that may never arrive, her father (Paul Reiser) donates to the convent in exchange for his daughter’s more spacious bedroom. Fernanda (Aubrey Plaza) spends her time physically and emotionally abusing the groundskeeper, when she’s not pretending that the convent’s donkey escaped yet again to have some time away. Genevra (Kate Micucci) worries about running afoul of the rules, to the point of perpetual anxiety. Even Sister Marea (Molly Shannon), the Mother Superior of the convent, has her secrets. Yet they eat their communal meals while Sister Marea reads verses, they perform their menial tasks, and they take confession with Father Tommasso (John C. Reilly), who tops his own evenings off with a little bit of the chapel wine.

Their lives are banal and largely unfulfilled, until fate adds a new wrinkle to their small corner of the world. Massetto (Dave Franco) is a servant at a nearby castle, ruled by the blustering Lord Bruno (Nick Offerman), who’s forced to flee after he’s caught with the Lord’s insatiable wife. Fearing for his life, he takes up with Father Tommasso, who offers him shelter in exchange for work, and for his agreement to pose as a deaf-mute to avoid any issues with the young nuns. But soon the attractive young Massetto begins to awaken feelings both known and unknown in the entire convent, and their whole familiar world begins to dissolve in a haze of lust, substance abuse, and forbidden rituals.

Baena pitches the film somewhere between the R-rated hangout comedies of the moment and the genuine transgression of Boccaccio’s source material. If it definitely takes on the auspices of the former, to the point where the film occasionally comes off like an A-list Adult Swim side project, the director nevertheless hits at least some of the right notes in his loose adaptation. After all, this is one of the lurid stories from the source text; if anything, The Little Hours dials back some of the smuttiest aspects of its premise. (Nobody ends up a house concubine at any point, for example.) Yet Baena revels in the dialogue he’s able to place in the mouths of the devout, and until the film’s self-aware approach begins to wear thin after a while, the film grasps at an engaging tonal balance of bucolic innocence and raunch.

The Little Hours finds its best voice when it doubles down on its absurdist premise, pushing its gimmick to occasionally unhinged places. Micucci is a particular standout as a young woman who has the 14th-century equivalent of a college awakening and starts to go mad as a result; there’s no moment in the film that better epitomizes Baena’s thesis about repression that the actress turning addled and bug-eyed, running through the woods covered in nothing but blood. (Reminder: it’s a comedy. The scene in question is a howler.) The general desperation with which Massetto is approached, and sometimes held down, would border on off-putting if the film didn’t so confidently frame its women in turmoil as good people shoved to extremes by a restrictive social system. As it stands, Fernanda holding the stable boy at knifepoint while awkwardly being coached through her first time by a friend hits a sublime note between collar-tugging discomfort, social commentary, and deft comedy.

But as it plays out, The Little Hours starts to feel more and more like a shortchanged opportunity. What starts as an intriguing, darkly funny look at the dangers of illusory freedom eventually goes broad, pulling punches on its story of raging hormones and young adulthood in the service of the next four-letter laugh. While the film’s use of anachronistic filth is admittedly funny, it also robs the film of the pathos that some of its actors find in their lost, wanting characters throughout. (Which, ironically enough, turns The Little Hours into a tiring series of riffs after a while, particularly given Baena’s preference for having his actors deliver their dialogue to the back of the house.) The film plays best when it’s concentrated on the hilarity of these wanderers’ inner lives. Its standout moments can be found in a group of young women getting drunk in secret or a mysterious bacchanal in the forests beyond the convent. Their secrets are far more engaging than the film’s general affinity for hijinks and hollered arguments.

The Little Hours is reasonably entertaining, but it hints just enough at something deeper that it may well leave you wanting. Yet there are still simpler joys for people willing to follow along with a dirty comedy in the Chaucer mold (though The Decameron was as much an influence on The Canterbury Tales as anything). After all, if we can’t enjoy a hearty laugh at a swearing nun and a slurry priest, why’s life even worth living, anyway?