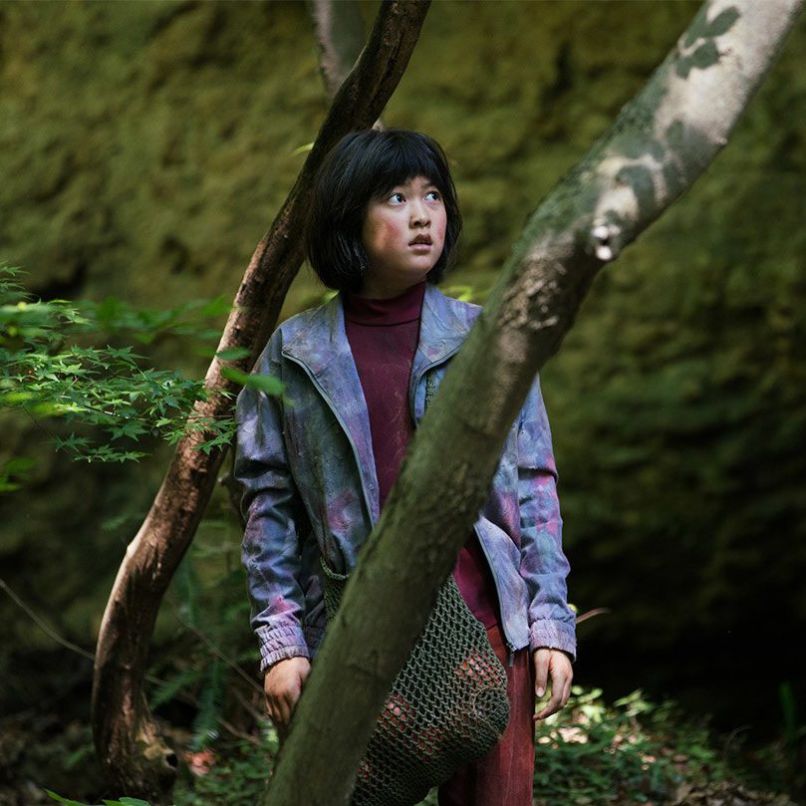 “The rotten CEOs are gone.”

At the beginning of Okja, the Mirando Corporation’s newly minted CEO Lucy Mirando (Tilda Swinton) makes this promise to a room full of investors, expecting that the new company leader’s bold vision for a future of more ethical foods will deviate from the nasty standards of her predecessors. After all, the old CEOs ran unforgiving slaughterhouses and raised animals in harsh captivity and didn’t understand the optics of farm-to-table production. But not Lucy. Lucy’s a more ethical kind of CEO, a visionary whose ten-year “super-pig” competition will reinvent Mirando’s public image as a kinder (and still profitable) source of food. Farms all over the world will raise these genetically hybridized animals, made solely for their delicious meat, and the best of all of them will be cloned and put into production.

The hypocrisy of “kind capitalism” is just one of Bong Joon-Ho’s pointed targets in Okja, and the director of Snowpiercer and The Host has quite a few more of them before the story can end. After ten years, when the competition is about to end, Mija (Ahn Seo-Hyun) and her grandfather (Byun Hee-bong) live in their modest mountain home and wonder what’s to come when the bright lights of the city return for them, and Okja. Okja is the best of all the super pigs, a strange amalgam of a hippopotamus’ body type, a pig’s defined physical portions, and a beagle’s floppy ears. Mija and Okja are best friends; ten years has allowed her to grow up with the gentle animal, and some of the early scenes step back and watch them frolic together, Okja bouncing Mija on her stomach and them sleeping beside one another in the barn.

But Okja was never meant to live on the farm in solitude and happiness. As the winner of Mirando’s breeding competition, the corporation comes to take Okja back. First, she’ll go to Seoul, then to New York City, and then the slaughterhouse. At least, that’s the plan until Mija heads to Seoul as well, and crosses paths with members of the Animal Liberation Front, led by Jay (Paul Dano). The ALF, which the film dryly notes hasn’t been a major cultural player in some time, is determined to liberate Okja and the rest of the super pigs. But first they have to expose Mirando’s unethical business practices by attaching a recording device to Okja and capturing the killing floors from the inside. Whether Mija is willing to be involved with this is largely beside the point.

Okja is a characteristically ambitious film from its director, who takes aim at everything from internet culture to shortsighted political radicals to the act of eating meat in and of itself. While there are sharp jabs at the sometimes overzealous nature of leftist politics (one ALF member won’t eat food of any kind, arguing that “all food production is exploitation”), its primary focus is on monolithic companies like Mirando, which only really differ from their peers in marketing and not in practice. Okja adds a new wrinkle, however, with its questions of the animal soul through pre-selected genetic breeding. If a creature exists for the sole purpose of being devoured, what can then be its true purpose beyond that?

In its sweet, almost Amblin-esque vision of a girl and her beloved creature, Okja explores the vitality of a free life in reply. Seo-Hyun has a magnetic presence as the film’s lead, even if her existence within it is sometimes more as a character that things happen to and around. But it’s her dogged persistence that gives much of the film’s first hour its impact, as Mija learns about the many dangers of the city in rapid fashion. In following her, Joon-Ho finds a few gorgeous compositions early on, particularly in a stark cut from the mountains bathed in twilight to a crowded staircase in Seoul, Mija and her red coat sticking out against the crowds. For all of the chaos that Okja eventually steers into, its best face is as a simple story of a child on the cusp of young womanhood, trying to save her best friend.

That rescue effort leads to one of the director’s more exhilarating setpieces to date, a chase through Seoul involving the ALF and Mirando and the police and an underground mall that Okja inadvertently demolishes while trying to escape captivity. As Mija and Okja race through hallways and down streets, Joon-Ho blends slapstick absurdism with grit and danger, resulting in something that approaches the balletic. The ALF throws down marbles to send the pursuing police slipping and sliding away, and in the middle of a film with life-and-death stakes, for a few seconds Okja picks up the manic cadence of a great Three Stooges bit. Up to this point, Okja stands with the best of Joon-Ho’s genre-bending work.

It’s when the film reaches America that Okja will likely divide audiences, and if the film’s quality only ebbs in the slightest, it nevertheless turns into a very different kind of movie. If the film’s first half excels on its “girl and her pet” simplicity, the back half immerses itself in the endless, cacophonous circus of damage-control marketing exercises. When Mirando decides that Mija should become its front-facing pawn, a way of making the end of the super pig competition appear kinder and gentler than it is, Okja becomes the story of commerce run amok, and the cartoon characters that fuel it.

Swinton is one such cartoon, a creation of shock-white hair, uncannily perfect teeth, and a relentlessly chipper exterior that masks her flop-sweating desperation to rebrand upon the “evil” practices of her predecessor. Yet as the film takes great pains to point out, Lucy is merely a different kind of shark, a smiling face on the same cattle-bolting factories that the company has always run. It’s a curious turn, although one that’s ultimately diminished by a late-game twist that sees Swinton playing a very different type of character. This turn is perfectly in keeping with the film’s ideas about the engines of capitalism humming even beneath the visible fronts, but it also largely diminishes the character in a way that’s off-putting even as it’s thematically appropriate.

That’s to say nothing of Jake Gyllenhaal, who gives the strangest performance by a country mile in a film chock full of unusual performance choices. As Johnny Wilcox, a pandering TV host and the public face of the super pig competition, the star may as well be wearing a sign around his neck reading “CHARACTER ACTING!” His performance will undoubtedly be a point of contention for viewers in the near future, either a bold stab at going entirely against type or a cynically shrill take on a Steve Irwin type. With bug eyes, odd vocal inflections, and even an extended sequence of playing drunk at his disposal, it can certainly be said that Gyllenhaal goes for it. Whether it ends well or successfully is another question.

But the star of the show is Seo-hyun, in more than one sense. As Mija is re-positioned as the adorable face of the super pig contest, the young actress radiates vulnerability and resolve, wholly unconcerned with anything but being able to go back to the mountains with her friend. Joon-ho has always been interested in the dynamics of strange family units, and Okja might be his most straightforward exploration of those themes to date. Particularly given the uncanny realism of Okja as a CG creation, Seo-hyun is able to form the kind of genuine onscreen connection that carries the film along through its increasingly strange paces.

Those paces culminate in a fit of effective but nevertheless obvious storytelling; while Joon-Ho isn’t exactly known for his understatement and nuance as a filmmaker, the wild free-for-all nature of his work is what’s made so much of it memorable. Yet Okja paints itself with a bludgeon after a time, immersing itself in the impersonal horrors of meat processing plants and crying animals to such a point that it almost starts to more resemble a PETA video than the film as which it starts out. The film’s brutal later scenes neatly tie together the film’s notions of abrasive consumption in every sense of that phrase, but also situate Okja as a forceful allegory above all, when its strengths are often more diverse.

Yet it’s not the savage darkness of Okja that lingers most after it ends, or even the political allusions. It’s the story of Mija and Okja, trying to make sense of a frightening world where good people and animals alike die each day, and the only thing that can usually prevent this from happening is more money. At its best, Joon-ho’s film powerfully reaches through its layered eccentricities and uses them in a simpler, more humane context. We all know where the animals we love to eat come from, and how cute they are in their infancy, and what happens to them thereafter. But to learn those lessons, and to make the choice to continue on or to cut this behavior from one’s life, is to grow up in either case. And as anybody will tell you, that’s one of the most fearful experiences of all.