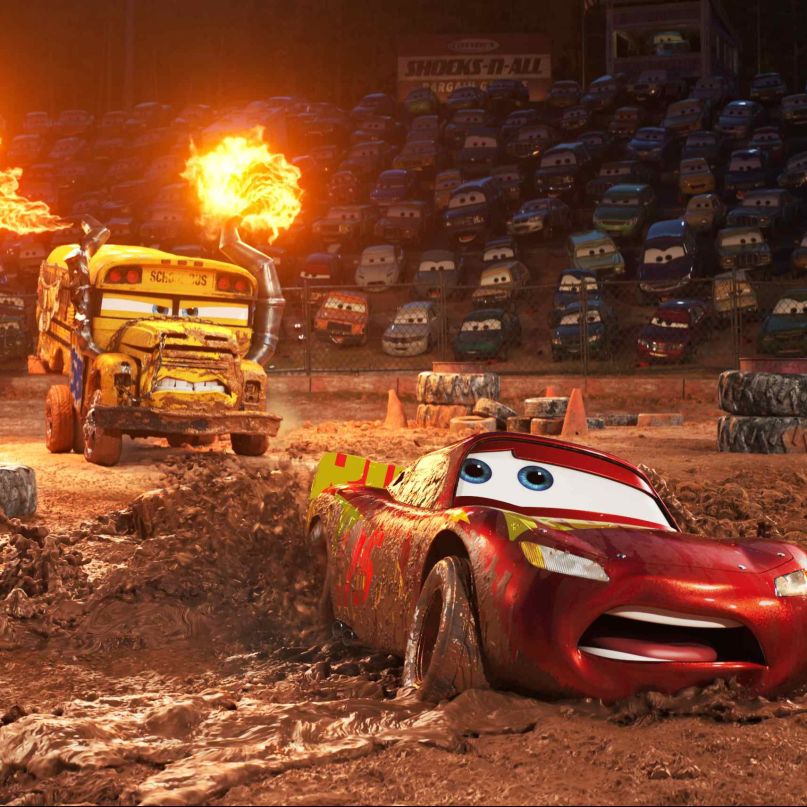 At its best, 2006’s Cars captured a lost part of America at which it’s become all too common to sneer: the romance of the old open road, and the fantasies of an interconnected nation along Route 66. The world got bigger, and then it got too big, and economics turned those small towns into nostalgia items almost overnight. Although the universal simplicity and appeal of talking vehicles is probably the biggest contributor to Cars becoming one of Disney’s all-time lucrative merchandising properties in the years since, that wistful sweetness also played a role.

Pixar lost that plot with Cars 2, a mess of spy-movie clichés which remains the studio’s only film to open to widespread critical rejection. But one of the first smart decisions made by Cars 3 is to essentially pretend that none of the previous film ever happened. First-time director Brian Fee (a longtime Pixar storyboard artist) wisely steers the film back to the tone on which it started, one of great affection for big race days and bygone traditions. And if Cars 3 often still feels like one of the most overtly kid-focused offerings in Pixar’s stable, by a pretty long shot, a case could be made that it’s those kids who might need and value this film’s lessons the most.

When Cars 3 picks back up with Lightning McQueen (Owen Wilson), he’s no longer the cocky rookie prospect who had to take a small-town sojourn to discover what racing is really about. He’s an active legend of the racing world, but time is starting to rear its head. A new supercar, Jackson Storm (Armie Hammer), arrives on the scene and promptly begins shattering records, along with Lightning’s confidence. More and more of his longtime peers are either retiring or being forced into it in favor of younger and faster cars. And when Lightning attempts to keep up with the new blood and re-establish dominance, a blown tire leads to a grisly crash that calls the aging racer’s future into serious question.

When Lightning is given the chance to rehabilitate himself with the most up-to-date technology by Sterling (Nathan Fillion), a hotshot tech billionaire of the car world, he jumps at it. To Lightning, it’s not an issue of whether he can keep pace with the next generation, but of how quickly he can do it. But when he’s paired with Cruz Ramirez (Cristela Alonzo), a bright young trainer with grander aspirations for her own future, he’s reminded that time and the modern world might be moving along without him anyway. Soon he’s trying to prove that he can still compete, while coming into an acceptance of the chorus from Springsteen’s “Glory Days,” invoked during a karaoke scene in the film: “Well, they’ll pass you by/Glory days/In the wink of a young girl’s eye/Glory days.”

While Cars 3 is a particularly G-rated outing even by Pixar’s standards, with only the aforementioned crash sequence and a few somber nods to the departed Doc Hudson (Paul Newman) interrupting the film’s light comedy and general positivity, it’s a more melancholic take on what’s arguably the studio’s kid-friendliest franchise. And given that it’s far less insulting to their overall intelligence than the cacophonous second sequel, that’s perfectly fine. What’s perhaps more interesting is how much more of the film is meant for the parents this time around; if the kids will enjoy the many extended race sequences, the film’s thoughts on aging out of one’s physical prime with dignity will likely fly over their heads.

In keeping with this, it’s also an oddly crotchety movie at points, with much of the first half focusing on Lightning’s total contempt for the modern-age lab methods used to train racers. (Oddly, this makes a Pixar movie echo last year’s Sully, an even more exhaustive treatise on the benefits of raw human instinct over science and numbers.) When the movie invites you to roll your eyes along with its tongue-in-cheek talk of sabermetrics counting Lightning out, or spends a solid 10 minutes chuckling at how Ramirez can’t even race in the sand because of all her time working on machines, it’s tough to shake the impression that now not even Disney movies are immune to anti-millennial grousing about avocado toasts and the like. But if it’s something of a paean to its target audience, Cars 3 also reaches across the aisle by eventually arguing through Ramirez’s plucky, held-down dreamer that maybe the kids are alright, and good enough to carry on our legacies without destroying everything once held dear.

In that message of inter-generational unity, and its lovingly sustained ode to Newman’s gruffly kind old car, Cars 3 makes for what would be an enjoyable final volume of the series, if only the property didn’t print enough money to make a Cars 4 all but a matter of formality. It’s a simple movie, sometimes tediously so, but it’s also as lightly kindhearted a movie as Disney has put out since the first Cars. It’s a movie made of brief chuckles and obvious but well-meaning lessons, and if it lacks the grander ambition of some of the studio’s best and most memorable work, it’s still an enjoyable watch.

It also features some of Pixar’s more eye-catching environments to date; a late-film “moonshine run” through the woods features some remarkable nature animation, and a number of the racing sequences are eerily photorealistic. (A demolition derby sequence is particularly impressive in its mud-slicked pandemonium, the slowly dripping filth sliding over and down the cars with uncanny accuracy.) The lighting effects on the cars are equally breathtaking from scene to scene, and at large, Cars 3 is a thoroughly impressive technical display. It’s a mostly lighthearted diversion in a way that may let down fans who yearn for the visionary highs of films like Inside Out, but again, Cars 3 isn’t in that business. It’s in the business of hearkening back to easier days, when the lessons were modest and the dreams were simpler and the entertainments were free of cynicism.