An ambitious project that, at its best, brings intimacy to the colossal weight of the universe 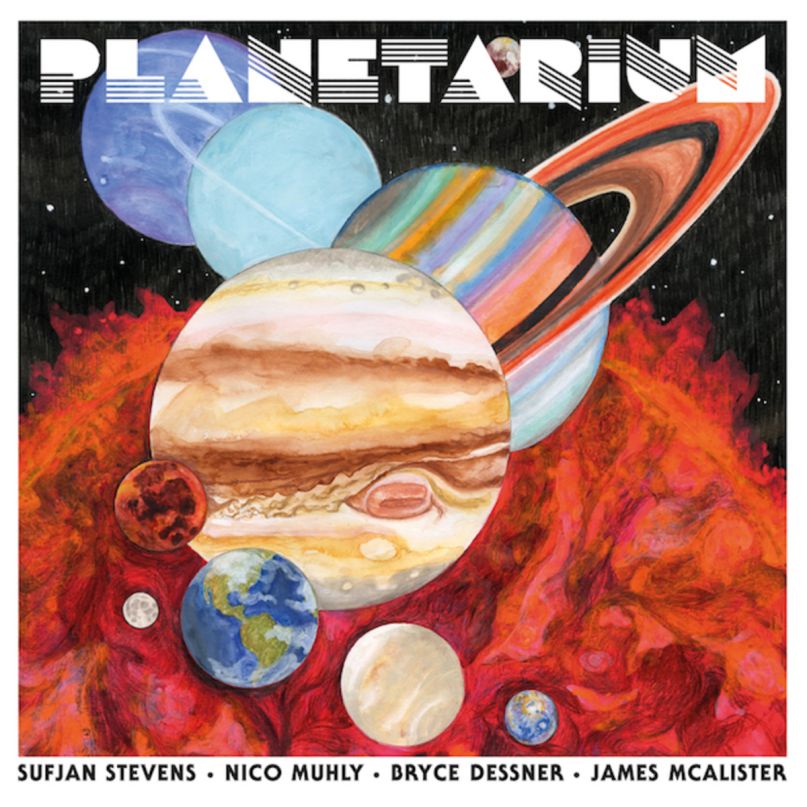 The sweeping, celestial-themed musical project that four genius-level musicians brought to the stage several years ago has finally earned a proper album release. Planetarium, co-created by Sufjan Stevens, Bryce Dessner of The National, composer Nico Muhly, and frequent Stevens collaborator and beatmaker James McAlister, brings the four men together for a somewhat free-form project that allowed them to take a loose, adventurous, whirlwind approach to their own creative impulses. The result is expansive and dense, if inconsistent, and scattered with gems.

Let’s be honest: At 75 minutes and with 17 tracks, Planetarium is a bit of a long haul. The musicians themselves even joked to Salon that it’s a good drug album, with Stevens playfully urging listeners to “at least get stoned.” Sometimes, that means it’s wildly unsubtle. “Jupiter”, for example, goes enormously broad and spacey in its rumination on the solar system’s biggest gas giant, recalling the artificial grandness of ’80s prog reflections on the cosmos.

But from “Jupiter”, the record transitions to the lovely “Venus”. The song’s subject is one you might suspect to be the perfect palette for Stevens, and you’d be right. “Venus” is an ode to sweet lust and youthful sexual discovery, displaying a sonic tenderness that allows innocence and eroticism to be compatible terms, not at odds. Stevens notably invokes Venus “Pandemos,” the usage more common for representing fleshly, sensual pleasure.

Other highlights include “Pluto”, which might bring to mind Andrew Lloyd Webber’s work on Phantom of the Opera, perhaps appropriate given Pluto’s story as the ruler of the Underworld, who abducts his beautiful, headstrong bride, Persephone. The strings are soaring and romantic, but melancholy horns bust in to put a damper on the party, followed by Stevens’ lamenting voice.

Dessner is a guitar virtuoso, and Muhly is an astounding, complex composer. However, some tracks on Planetarium, despite their gorgeous, considered arrangements, are simply a bit of a slog. If you don’t go in for ambient music, you might skip through a handful of the instrumental-only songs that make up a good portion of the record’s middle, like “Sun”. (If you do love ambient music, well, you will love these tracks.) Penultimate song “Earth”, at a whopping 15 minutes long, is the most blatantly space-documentary-esque track; for much of the first several minutes, you might find yourself drifting in and out, as visions of single-celled organisms and primordial ooze dance in your head.

There is definitely a corny theatricality holding this record together. The creators often go overboard and then some. But there is fun to be had in music, even music made by lauded composers and technical geniuses that takes on the largest and most serious concept imaginable: the universe. Planetarium’s playfulness is never more apparent than during some of the shorter interludes. You’d have a hard time not cracking a smile at the 31-second “Halley’s Comet”, a slip of an instrumental that streaks on by with a wink. And the jaunty, metallic blips of “Kuiper Belt” are a charming adventure into a cosmos that only exists in long-closed arcades.

The quartet’s approach to “Saturn” is perhaps the most interesting fusion of off-kilter weirdness and intuitive songwriting, as they choose to pull out and express the god’s most sadistic trait: feasting on his own children. The skittering, pounding song can most closely be described as electronicore, with lyrics so metal you would have a hard time guessing, out of context, that Stevens wrote them: “The youngest of children/ A cannibal addiction/ Innocent victim, bite mark, body part/ When in secret siege, we eat them.” The refrain, just to drive it home, is “Tell me I’m evil/ Tell me I’m not love.” Despite being heavily Auto-Tuned and synthy, the arrangement of the song, its structure and cadence, pulls straight from metal, and “Saturn” is begging to be covered by a death or doom metal band. That’s a lot of words about a song that was panned by several outlets after its release as a single, but it’s nothing short of sublime in its own bananas way.

When it comes to the lyrics, indie rock’s favorite polymath delivers as always on Planetarium. The promo record came with a lyric sheet, thank god, and it’s a book of poetry in its own right, telling deeply personal, grounded stories through the language of fickle, all-powerful gods and goddesses. A committed listener would do well to annotate each song like a high school freshman, noting words they don’t know and looking them up. Indeed, what’s most beautiful is how the record will force you to spend time inside yourself, inside your head. You’ll remember things. You’ll wonder when you forgot them. You’ll hopefully indulge your curiosity and revisit concepts or stories you encountered a long time ago or seek out answers to questions that come up as you listen.

The album ends with “Mercury”, which is an obscenely brilliant move. The song is picture-perfect, with Dessner’s guitar a goosebump-raising accompaniment to Stevens’ clear and beguiling vocals. After an hour of hyperliterate, multisyllabic allusions and references over boom-crash-whooshing (of the highest and most advanced musical caliber), Stevens delivers disarmingly simple statements of all that he is: faithful, steadfast, desperate, sorry.

It’s the songs that accomplish this feat of bringing personal intimacy to the colossal weight of the universe and its conductors, those tempestuous gods and goddesses, that succeed best: “Venus”, “Mercury”, “Pluto”, the elegant “Neptune” that opens the record. Every listener will have to individually cherry pick the songs that work best for them, but these are the ones that best deliver on the possibilities of the album’s premise.