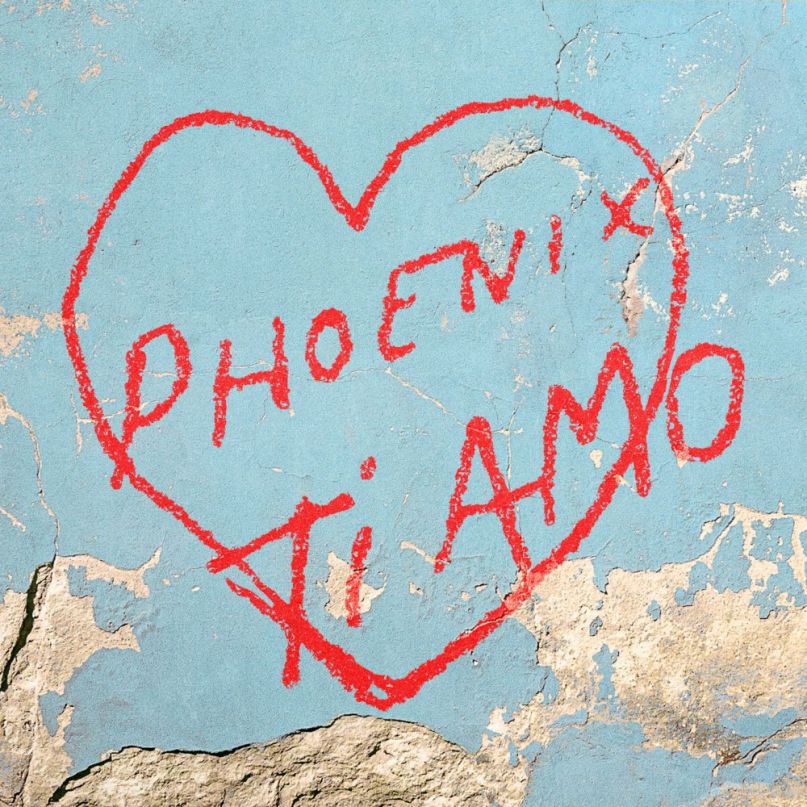 During 2015’s Bataclan massacre, Phoenix guitarist Christian Mazzalai spent a nervous night locked down by police in a Paris studio, watching along with the rest of the world as the story of the concert hall’s unthinkable invasion and heartbreaking loss of life played out across social media. The story offers a small but indelible connection between France’s premier rock band and the tumultuous mixture of violence, anti-immigrant fear, and right-wing reactionism that’s shaken western Europe’s political order.

And yet, despite the upheaval, summer still comes to the Mediterranean. This year, it brings along Ti Amo, Phoenix’s sixth record and first since 2013’s uneven but intermittently thrilling Bankrupt! Although Thomas Mars and company haven’t morphed into a political agitpop group in those intervening years, they have steered their signature brand of romantic impressionism towards an unmistakeable reaction to the west’s most recent political flash points.

Italy is the most obvious source of inspiration here; in press materials, the band cites everything from pistachio gelato to ’70s film stars Monica Vitti and Marcello Mastroiani as ingredients in their “fantasized” version of the country. They also draw deeply from the country’s vintage dance floors, eschewing the colder side of Italo disco in favor of its bubbly excesses of groups like Scotch and Fun Fun.

However, Europe’s creeping sense of unease rears its head early and often, especially on the record’s singles. The effervescent “J-Boy” paints a picture of a romantic meet-cute against the backdrop of an unnamed dystopian collapse. Just one track later, the sleazy-in-a-good-way title track repeats the phrase “I love you” in English, French, Italian, and Spanish, a come-on that’s “100% lover, 0% violence” and a multi-lingual call for unity that reminds listeners of the things they can all agree on (in this case, getting sexy at the beach).

Fans of Phoenix’s early Strokes-like strut will continue to find disappointment on Ti Amo, but even the hardest of leather-jacketed hearts will soften at expansive synthpop heights reached by the record’s best tracks. “Tuttifrutti” is an early Balearic standout, a scoop of musical ice cream that approaches peak ’88 (right down to the surgical use of a nostalgic synth choir patch) without descending into pastiche. Elsewhere, the joyful arpeggios of “Lovelife” recall the more playful sides of synth pioneers from Kraftwerk to Yellow Magic Orchestra to whoever wrote the theme song to Doogie Howser, M.D.

Perhaps the best song on the record is one that doesn’t exist yet; built around a Fela Kuti beat, “Fleur De Lys” and its irresistible first 15 seconds just beg to be blown out into an extended house remix.

Ti Amo isn’t a perfect record; things sag slightly when the tempos drop, and the tracklist doesn’t quite have a year-defining hit in the caliber of “Lisztomania” or “1901”. However, while it may not be an instant classic, it also feels like required listening for a summer that seems destined to be sun-drenched and scary at the same time.

In a recent New York Times profile, Mars denied that his band had used the Ti Amo sessions to escape the world’s grim realities, and that rings true. However, that diligent studio time did produce a more responsible (and timeless-sounding) type of sonic escapism. By letting the world’s darkness in and finding a way to dance anyway, Phoenix helps listeners remember that while evil isn’t going anywhere, neither are the sunsets of Italian beaches or the soaring romantic nights that follow.