Jeff Tweedy – Together at Last

Less is more on the Wilco frontman's sparse, acoustic debut 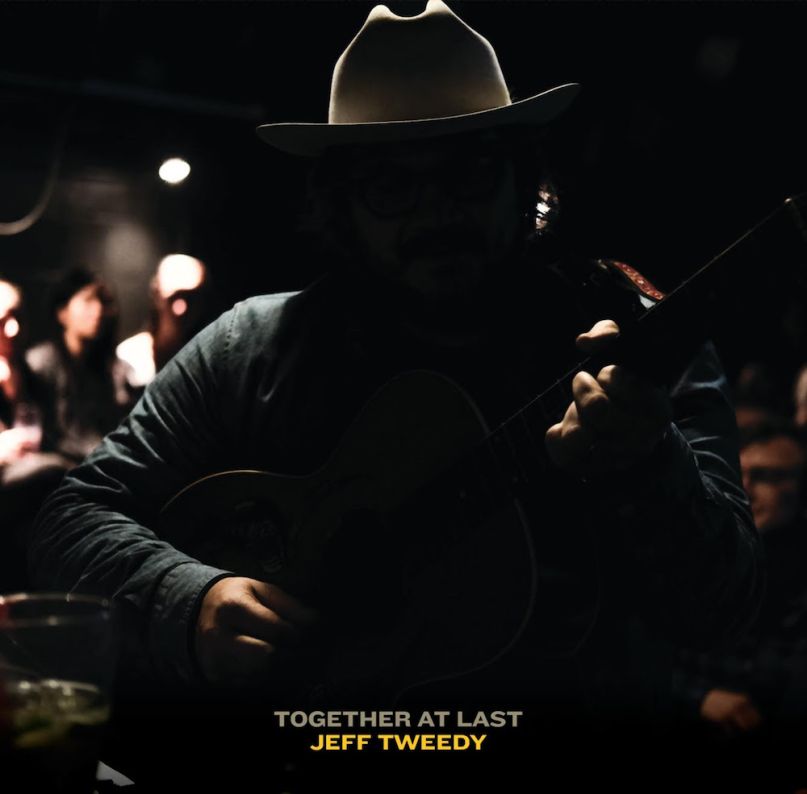 “I shake like a toothache when I hear myself sing,” Jeff Tweedy confesses on “Ashes of American Flags”. Those sound like the words of a man who wouldn’t entertain the idea of releasing a solo acoustic record. Maybe when the song was first released 15 years ago, they were true. Nonetheless, here the track is, smack in the center of a record capturing the Wilco frontman all by his lonesome.

Together at Last, which promises to be the first in a series of solo efforts from the singer, assembles 11 tracks from across Tweedy’s expansive back catalog and strips them down to their bare acoustic bones. With no one to turn or pass the spotlight to (save for longtime Wilco engineer Tom Schick), Tweedy settles in for some quality time with his own songs, including some originally recorded with side projects Loose Fur and Golden Smog. Never has Tweedy been this introspective on record, letting his words and feelings hang wide out in the open. Whether or not that’s a good thing depends on which side of the singer appeals to you: the experimental wunderkind or the moody troubadour.

Tweedy’s always been a little bit of both, even if it’s the former that typically grabs the attention of fans and critics. Yankee Hotel Foxtrot, released in 2002, made Tweedy a household name in rock circles, and his reputation as one of his generation’s great songwriters only grew on the back of equally adventurous Wilco efforts that followed. A Ghost Is Born was a complicated, drug-addled opus. The Whole Love marked the band’s full-circle return to experimentalism after two comparatively straightforward releases. Star Wars, released in 2015, is full of moments as sonically out of bounds as its title implies. The beat on Tweedy is that of a playful, wily musical maverick backed by one of the most prodigiously talented bands in the land.

But to focus solely on this is to ignore what kind of songwriter he truly is at heart. Uncle Tupelo, Golden Smog, and early Wilco records revealed Tweedy to be a boozy, heartbroken balladeer. That side of him never left, even as Wilco won the world’s ear as one of the most exciting American rock bands of the 2000s. Together at Last gives more focus and attention to that quieter side of Tweedy’s musical persona, one influenced more by a singer-songwriter approach than a desire to break down rock and roll barriers. By stripping away the instrumental bulk and studio touches that defined records like Yankee Hotel Foxtrot, A Ghost Is Born, and Summerteeth, Tweedy actually makes his songs sound even more human and personal.

That’s no small feat when you’re dealing with some of the best tunes in the Tweedy songbook. But the singer’s attempts at pulling back and letting the core of his songs do the work mostly succeed on Together at Last. “Via Chicago”, as done on Summerteeth, is as sublime a song as Tweedy’s written, but pared down to nothing more than a guitar, harmonica, and his voice, the song sounds even more fragile and despondent than its predecessor. He employs the same “less is more” approach to the record’s remaining 10 tracks. Tweedy ditches the ambient strangeness that defines Loose Fur’s “Laminated Cat” in favor of his quiet, semi-stoned voice and an acoustic guitar. “Dawned on Me” and “I’m Always in Love”, two of Wilco’s more upbeat numbers, are equally well-serviced when left to Tweedy’s own devices. As gorgeously ornate as his songs can be, many of Tweedy’s songs crave intimacy, and he affords them that much here.

What you see is exactly what you get on Together at Last. It’s Tweedy perched up in is Chicago loft giving his own songs the coffee house treatment. It’s hardly his most sexy or dazzling effort, and that’s admittedly by design. But even without the willful innovation, the record is important evidence to just how strong and poignant his songs are in skeletal form. Wilco is nowhere to be found here, but Together at Last is still a very good Jeff Tweedy record that should hold over fans until his band’s next musical flight of fancy.

Essential Tracks: “Via Chicago”, “Laminated Cat”, and “Dawned on Me”