by Collin Brennan and Ryan Bray 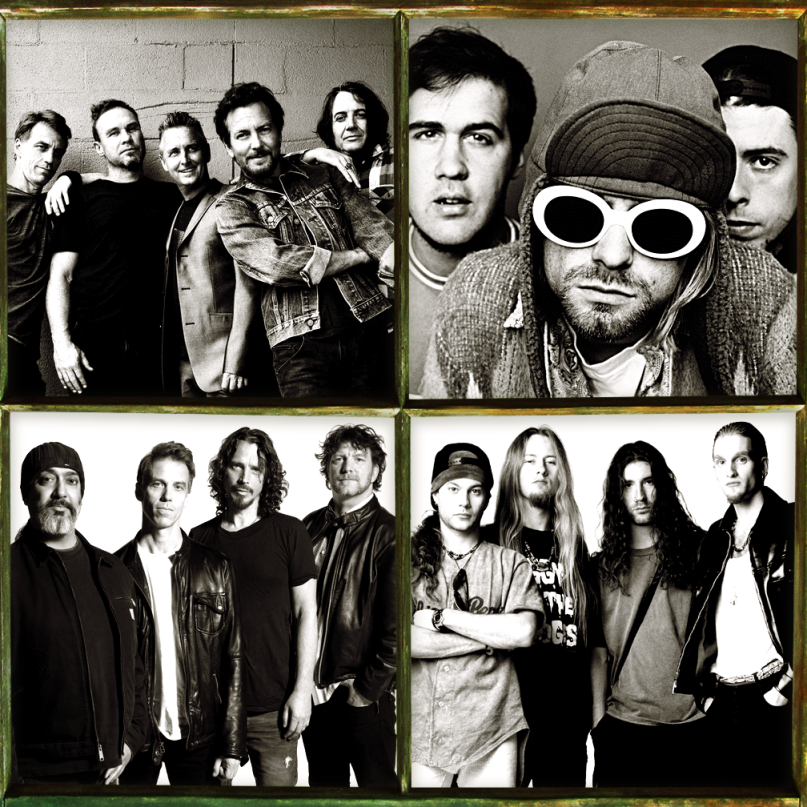 Pearl Jam 30 marches on towards Gigaton with a look back at veteran CoS writers Collin Brennan and Ryan Bray debating the best grunge band of all time. Also, be sure to check out our definitive Pearl Jam album ranking and our favorite concerts.

Today, grunge is as immediately identifiable as hip-hop, R&B, soul, country, or any other musical genre. For that, we can thank Nirvana, Pearl Jam, Alice in Chains, and Soundgarden. Grunge’s top four musical exports helped dictate the course a wide swath of popular music would take in the ‘90s, and their songs and records still hold up today. But how well? And whose stand up the best?

To commemorate the 25th anniversary of the Singles soundtrack and Seattle’s rise to pop music prominence, CoS scribes and seasoned grunge gurus Collin Brennan and Ryan Bray broke down and analyzed all four bands in a number of categories to determine which has best stood the test of time.

Collin Brennan: I suppose we should start with the elephant in the room — that dreaded word, grunge. As with any general term used to describe a lot of specific things, it seems a bit reductive. To kick this off, Ryan, I want to ask a pretty vague question: How does the word “grunge” make you feel, and do you think we might be doing these bands a disservice just by means of tossing them all into the same box?

Ryan Bray: As I’ve gotten older, I’ve kind of pushed back against genre labels. The more time you invest listening to music, the more you realize how pointless it is.

But it’s not hard to understand how “grunge” came to be. All these bands not only shared a look and an image — they were from the same damn city. When Nirvana blew the barn doors off shit in 1992, it was inevitable that the Seattle scene was going to be packaged and pigeonholed. It’s just the way we’re programmed to understand things.

That said, I hardly think all of the bands that came out of the grunge moment are clones. In the case of Nirvana, Pearl Jam, Soundgarden, and Alice In Chains, each band introduces enough wrinkles into the formula to stand on their own two feet. To that end, I think blanketing everything that came out of the Pacific Northwest as grunge kind of did a lot of bands a disservice. What say you?

CB: I actually got into Nirvana a few years after discovering bands like Ramones and Black Flag, and for a lot of the same reasons. I remember being 14 and running around telling anybody who would listen that Nirvana was a punk rock band, dammit! This seemed like a crazy revelation at the time, but looking back, it’s obvious that punk and hardcore played a tremendous role in shaping the grunge sound.

And one of the traits grunge inherited from punk is its very tangible sense of locality. You’re right, all of those bands can stand on their own two feet, yet somehow they’re all intrinsically connected by Seattle and the Pacific Northwest. I think if the term “grunge” has any use, it’s to sort of connect the dots between the various riffs on punk and hardcore and heavy metal that were going on in Seattle around the early ’90s.

So, I’m not going to feel too badly about what we’re about to do, which is to figure out, ONCE AND FOR ALL, which grunge band stands tallest among the heap.

CB: Full disclosure, I haven’t showered in three days. So, we’ve gone ahead and broken this convoluted contest down into eight categories, some of which may be more subjective than others. We’ll see. Let’s rank ‘em by category, and let the devil sort ‘em out from there.