Revisiting the Retro-Futurist Dreams and Nightmares of The Fifth Element

A look back at Luc Besson's wildly ambitious, much-beloved vision of 2263 in all its glory 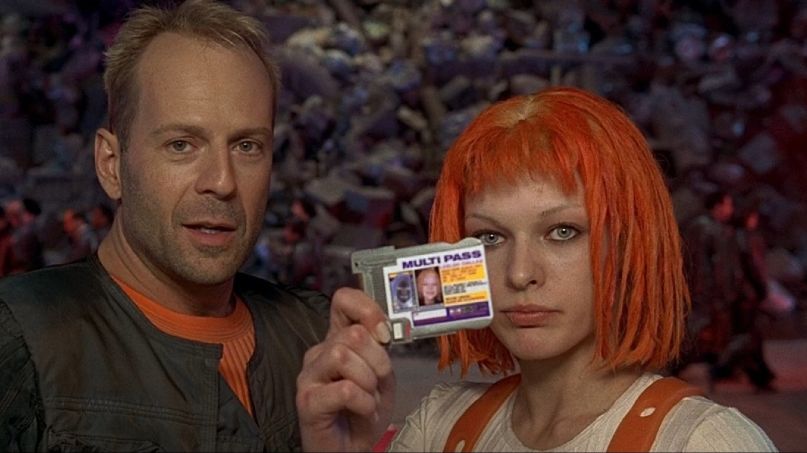 Luc Besson has long understood the value of a mysterious universe in his work. In The Professional, that mystery emerges in the attempts of Natalie Portman’s young assassin-in-training, as she learns the ropes of an entire shadow economy existing underneath the surface of the world. In his surprise 2014 hit, Lucy, that mystery came from Besson’s willingness to sidestep the logical conundrums of a super-drug that can grant human beings godlike powers if ingested in large enough quantities. (This approach frustrated some audiences, but also stands as one of the very few examples in recent years of an action film trusting its audience to get on its wavelength and keep up.) And in arguably his best film, The Fifth Element, Besson figured out a simple truth that’s plagued many filmmakers for years: Sci-fi is a lot more fun when it doesn’t spell everything out.

This week marks 20 years since Besson’s wild space opus was released in theaters to modest success in the US and major returns elsewhere (only $63 million of the film’s $263 million gross in total came from domestic box office). But the real story of The Fifth Element lies in its cult appeal; anecdotally, it’s one of the more oft-cited examples of a well-built sci-fi universe, and in practice, it was once one of those movies that achieved longevity through a lengthy run on cable television. It’s the kind of film that only appreciates with time, as audiences of a certain mindset latch onto its bizarre hodgepodge of comedy, political commentary, and grave space opera as Besson intended. And for all of its dated affectations (the intrusive soundtrack in particular), The Fifth Element is the kind of timeless piece of sci-fi that only grows more prescient as the years pass.

Besson’s vision of a space-age future is as informed by the old as the new, speaking to its particular brand of timelessness. Element blends practical effects with the then-burgeoning field of CGI throughout, from its creature designs to its charmingly model-esque spaceships drifting through expanses of green screen. When Leeloo (Milla Jovovich) famously sprints through a drainage grate before finding herself faced with an NYC full of hovercars, digital billboards, and unimaginably tall skyscrapers, there’s a tactile quality to Besson’s art direction that separates it from so many of the exercises in fully animated worlds that have followed in the years since. It’s a grungy near-dystopia full of bureaucratic struggle at nearly every turn, but the plausibility of a New York that just kept building atop itself makes it all the more realistic. It’s retro-futurism, delivered with an alt-‘90s sheen that’s at once specific to its time and universal in its fantasies of human and technological overgrowth.

The Fifth Element is full of these bold design choices, from the early moments in the city to the endless delights of Fhloston Paradise, and Besson had as perfect a hand in visualizing those spaces as any director could find: Jean-Claude Mézières. Later this summer, Besson will pay more direct tribute to Mézières with Valerian and the City of a Thousand Planets, a direct adaptation of Mézières’ classic Valérian and Laureline. However, Element stands as the director’s first love letter to what is, by his own admission, a significant influence on this film and his work at large, in no small part because of Mézières’ contributions to the film’s production design. (Besson likewise involved Jean Giraud, another famed artist, in the same capacity as well.)

Mézières’ work has long concerned itself with the unique, lived-in qualities of alien civilizations down to the finer details, and The Fifth Element follows this same approach. After its brief introduction in 1914 Egypt, Besson eschews any further connections to a familiar Earth in favor of one that’s become universalized, a hub for humans and all manner of alien species alike that functions as just one small part of a grander intergalactic legislature. But when the film’s chase-minded plot is set in motion (find the stones that give Leeloo the power, as the titular fifth element, to destroy an ever-growing malignant planet), Besson sprints to as many corners of his vividly realized world as possible. In lieu of overstatement and exposition, however, the director’s screenplay (co-written with Robert Mark Kamen) races breathlessly through the universe, filling in what it must as necessary and allowing the audience to immerse itself in its unanswered riddles otherwise.

What Besson accomplishes so well, even as the film’s tone jarringly shifts from offbeat humor to life-threatening gravity and back again with frequency, is a take on the future in which sentient life hasn’t actually changed all that much. The heroes are still good-humored, the villains nefarious, and hell, McDonald’s still offers drive-through service. People are still people, chasing love and truth against the forces that always conspire against one or both, and the fact that some of them are bizarre alien creatures is treated as incidental throughout. Where so much sci-fi obsesses over the many ways in which another world would be different from our own, The Fifth Element posits that 250 years will only change the settings and aesthetics, not any of the creatures inhabiting them.

Yet, in what was arguably the director’s boldest choice, Besson gets a handful of familiar faces to deliver some of their strangest performances on record. Element might be calibrated for maximum familiarity in terms of its interspecies drama, but the dramatic turns are vividly strange in a way that even Hollywood’s bombastic sensibilities of the time couldn’t often manage. Jovovich made her name as Leeloo, and her work remains magnetic as her arc follows her from the troubling early cliché of the sexy-yet-childlike sci-fi heroine to a confident near-god capable of saving untold billions of lives. (Fun fact: the “divine language” was real, derived by Jovovich and Besson, and the two would communicate in it on set.) Gary Oldman’s twanging, scenery-gnawing Zorg is just another bizarre character turn for the actor, but one of his very best in a long career of them. And Chris Tucker’s take on Ruby Rhod, controversial through it remains for many, is flecked with one daring choice after the next, his signature motormouth delivery couched in a flamboyantly femme confidence.

It’d seem that the film’s simplest performance is Bruce Willis’ starring turn as Korben Dallas, the seen-it-all ex-major turned cabbie who ends up tasked with assisting Leeloo in her mission. On its face, it’s the same bare-arms-and-undershirts work the actor had been doing since Die Hard rocketed him out of television and into leading-man roles. But the tank top is bright orange, and the actor’s weary relatability has rarely been used to more empathetic ends than it is here. The closest match in Willis’ filmography is his soft-spoken work as a lovelorn small-town cop in Moonrise Kingdom, delivered years later as a sly comment on the actor’s known body of work. Here, there’s a gentle quality to Korben that becomes crucial when Besson has to sell the budding romance between he and Leeloo without the audience latching onto how potentially disquieting it could be. The film wouldn’t work if Korben were played as a more straightforward, wisecracking hero, but there’s a vulnerability to Willis’ dogged attempts to protect his quarry that serves the film perfectly.

That sort of vulnerability is crucial to Element’s timeless success, even as Besson ladles on the bombast. When Korben sits to watch the Diva Plavalaguna perform her aria, the wonder on his face is sweetly humane. When Ruby effortlessly switches in and out of “character” as soon as his mic is turned off, it’s a reminder that even the most vapid among us are people when the lights die down. (If anything, Ruby’s narcissistic hyper-connection is more familiar today than it was in 1997.) The world of 2263 is still just as conflicted as any other, and Besson understands this well, rooting his world’s conflicts in all-too-common natural errors: hubris, greed, and arrogance.

The film’s politics are hardly subtle; The Fifth Element reveals itself early as a piss-take on government encroachment, working-class strife, and the indifference of big business. But Besson roots even the film’s preachiest moments in character, effectively finding the soul beneath all the gloss and painted rubber. This most effectively manifests in the late scene where Leeloo educates herself on the long history of war, from dictators to coups to nuclear bombs, and is left to wonder exactly what she’s fighting so hard to protect or why. (“Everything you create, you use to destroy.”) There is beauty in even the dirtiest and most mechanical places in Besson’s future, but it’s only as good as the beings that step forward to maintain it. Particularly when framed against Oldman’s soulless bottom-line chasing, The Fifth Element is often a cynical riff on what people will eventually do to the future if left to their own devices.

But it’s also a hopelessly optimistic film all the same, from the heavily debated instances of levity and humor throughout to its lusty final punchline. The Fifth Element imagines a future where labor exploitation is punished by death, and love saves the day every time. Where nobody concerns themselves too much with somebody else’s status or species. Where a cabbie with a good heart can stand against the oncoming ruin of all civilization. These notions feel almost quaint in a time riddled with confusion and division and so many falsehoods, but that’s the joy of Besson’s arguable masterpiece. It’s a film of odd simplicity, a hero’s journey of traditional stock plopped into one of modern sci-fi’s more uniquely memorable universes. It’s also the kind of studio movie that people are usually thinking about when talk of latter-day creative bankruptcy begins to crop up, as a reminder of what big-budget filmmaking can be when left to its least tethered devices: a realization of worlds far beyond the imagination.