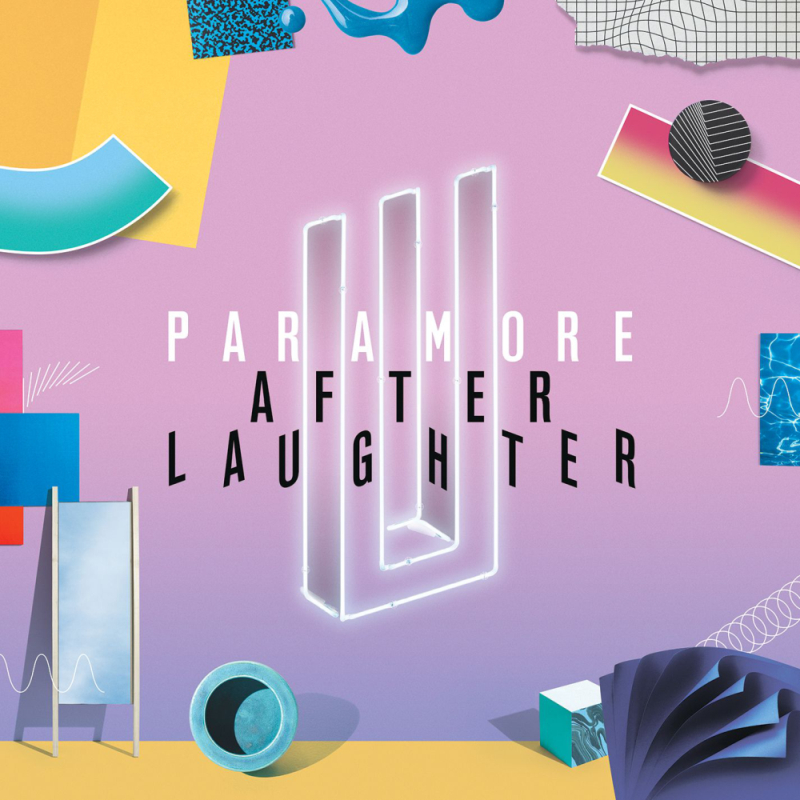 After Laughter finds Paramore, like Carly Rae Jepsen and M83 before them, delving into the pantheon of ’80s pop and declaring, “There’s gold in them hills.” Awash in primary colors, After Laughter sheds the harder edge of its predecessor, Paramore, which accented its pop bona fides with chugging guitars and a distinctly rockist energy. Paramore, now five LPs and numerous highly publicized lineup changes into their career, aren’t doing anything fundamentally different than what they achieved on their best records, Paramore and Riot!: The hooks are near-uniformly great, and frontwoman Hayley Williams remains a magnetic lead vocalist, pushing her voice into high notes with the vocal cord equivalent of a punch (see the chorus on “Rose-Colored Boy”). The aesthetic shift toward new wave and ’80s pop that After Laughter represents is superficial, not structural.

Consider the megahit single from Paramore, “Ain’t It Fun”. In addition to being quite possibly the best song Paramore have written, “Ain’t It Fun” typifies the band’s ability to keep one foot in its established identity while toeing new sonic territory with the other. The exultant gospel choir in the song’s sing-along bridge is a hat-trick unheard in the band’s prior LPs, but the palm-muted and distorted guitar chords that accompany the choir keep Paramore rooted in their alternative rock and emo origins. With Paramore, the old is rarely far from the new. The same applies to After Laughter, which, for all its bouncy synths and sugary hooks, still echoes the angsty band that made Riot!. When Williams accuse-asks on “Fake Happy”, “You think I look alright with these mascara tears?”, one can’t help but remember the stud belts and black skinny jeans copies of Riot! were sold alongside at Hot Topics nationwide.

Original drummer Zac Farro returns to Paramore on After Laughter after having split from the group with some controversy in 2010. This follows the similarly controversial departure of bassist Jeremy Davis, which took place after Paramore’s release. (A 2016 legal battle between Davis and the band ended in a settlement this year.) Since Farro’s initial departure in 2010, it has become something of a staple to speak of Paramore’s tumultuous lineup, as if with each new (or returning) member, something about the band itself must also be changing. Even with the shifting instrumental emphasis and differences in timbre on After Laughter, Paramore do a fine job building on the momentum initiated by their widely acclaimed self-titled record.

Lead single “Hard Times” kicks things off with a Hot Chip calypso jam, which concludes with an irrepressibly catchy riff in the outro. Even in this moment of genius, however, there is an unfortunate sign of strange things to come. The arpeggio riff at the end of “Hard Times” is matched note-for-note by a robotic voice, the sound of Daft Punk’s Random Access Memories joining the party in the last few seconds. “Hard Times” is a fine single and a great choice to open After Laughter, but such sonic accoutrements are unnecessary when the core of the song itself is solid. The same goes for “Fake Happy”, which boasts a simple and effective synth riff and yet inexplicably begins with a hushed acoustic intro, with Williams’ voice filtered through a kind of telephone effect. In moments like these, After Laughter’s wise emphasis on hooks and choruses is unnecessarily accented by odd instrumental and arranging choices.

When the hooks are good, though, they’re great. “Rose-Colored Boy”, despite its somewhat clunky titular metaphor, joins “Ain’t It Fun” in prime sing-along quality, both for its cheerleader intro and Williams’ impressive vocal gymnastics in the chorus. “Idle Worship” provides some welcome energy late in the record, especially given that the odd, mostly throwaway Aaron Weiss (mewithoutYou) feature, “No Friend”, derails an otherwise strong conclusion to the record. Weiss contributes a mostly spoken, mostly inaudible series of cryptic sentences that practically beg listeners to read into them as a description of Paramore’s career: “A semi-conscious sorrow sleeping in the bed I’ve made/ That most unrestful bed, that most original of sins/ And you’ll say that’s what I get when I let ambitions win again.” The last of those three sentences puts into words an objection raised against Williams in past controversies related to Paramore. To some, Paramore can appear to be Hayley Williams Featuring Some Other Guys.

If there’s one thing Paramore and now After Laughter disprove, it’s that very suggestion. Williams boasts undeniable talent, but her gusto requires the sharp songwriting and clever instrumentation of her bandmates, and After Laughter testifies to what happens when a singer like Williams is met with a group of quality instrumentalists. The truly interesting conflict for Paramore on After Laughter comes not in there being yet another lineup change, but rather the band’s juxtaposition of angsty lyrics and cheery pop. “Throw me into the fire/ Throw me in, pull me out again,” Williams sings atop the insistent bass drum and slinky bassline on the bridge of “Told You So”. No matter its rocky moments, After Laughter exhibits the enduring trait that makes Paramore so appealing: Even when the situation is dire and emotions are running high, they tell it like it is with smiles on their faces. You’d be forgiven for missing the seriousness on After Laughter for just how much damn fun it is.