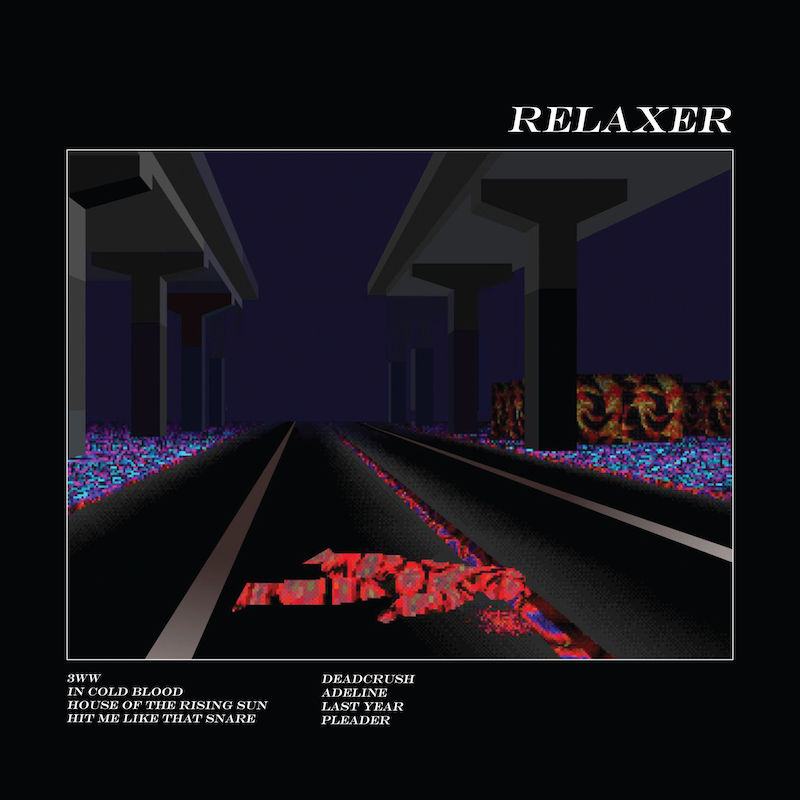 Between the Mercury Prize that came with their 2012 debut and continued commercial success, Alt-J are something of an anomaly in 2017, a successful modern alternative rock band not riding the coattails of hits from a decade ago. Their success arises from their general inoffensiveness, a palatable interpretation of late-’00s Radiohead, Foals, and Grizzly Bear records. For their third album, Relaxer, the British trio decided to challenge themselves by expanding their sound beyond the muted, pensive rock of their early years.

With only eight songs coming in at 39 minutes, Relaxer is the band’s shortest album yet. However, this brevity does not lead to a tightly focused record. Each track sees the band trying on a different suit, a scattered approach that finds varying degrees of success. They make puzzling decisions, like their update on folk standard “The House of the Rising Sun”. Changing a handful of lyrics and adding some original verses, they re-frame the classic tale to focus on the narrator’s alcoholic father. Slowed-down and dramatic, their take on the song ominously builds in a way that almost guarantees it’s future placement in a movie trailer.

The problem with Alt-J’s approach throughout Relaxer is that they frequently come off as different bands clashing with themselves, often within the same song. Hypnotic guitars reminiscent of The Books work well on their own, but paired alongside singer Joe Newman’s outsized theatrical impression of Dan Bejar trying out for Muse, the sound doesn’t quite hold on songs like “3WW”. Each song is a gamble of which Alt-J will show up, whether it’s the sparse, haunting sound of single “Adeline” or the extravagant hymnal on closer “Pleader that veers towards contemporary Christian rock levels of bombast.

Unlike the affable aimlessness of This Is All Yours, Relaxer finds Alt-J more than willing to take risks so that even when the experiments fail, it’s not for a lack of trying. This is most apparent on the band’s attempt to write a Velvet Underground song on “Hit Me Like That Snare”. Over a psych-garage freak-out, Newman is in rare form as he exhibits a drunken swagger where one could describe him as “cool” for the first time in his career. The facade doesn’t last long, as you learn no one can sound dangerous singing the faux-woke lyric “I don’t subscribe to your cultural norms” not once but twice. The song is fully derailed by the time it reaches its disastrous ending, a repeated, petulant refrain of “fuck you, I’ll do what I want to do” that aims for Bradford Cox but ends up something that wouldn’t make it past the cutting-room floor of a Black Lips studio session.

As scattershot and wandering as Relaxer is, there are moments that work well. “Deadcrush” builds to a steady groove over the band’s most forceful beat yet, while Newman finds his rock star voice through some drugged, stream-of-consciousness rambling that somehow works Henry Tudor and Anne Boleyn into a commentary about sampling and licensing music for commercials. On single “In Cold Blood”, the horns bring in a melodramatic flair that elevates an otherwise forgettable song, adding a bit of camp to a band who could stand to take themselves less seriously.

Whether discussing “cultural norms”, commercialism, or how technology affects relationships, Alt-J frequently attempt to address larger issues even if their overall message comes off as muddled. Sometimes these asides are humorous, like a cheeky name-dropping of a Radiohead record that plays with the frequent comparisons. Other times, like the repeated zeros and ones on “In Cold Blood”, the winks and nods fail to extend anywhere beyond the surface level. As it wouldn’t be a proper Alt-J record without at least one embarrassing sexual reference, Relaxer’s contribution comes early with the line “Well that smell of sex, good like burning wood,” where someone’s clearly doing something wrong.

The reason to bring this up is because when Alt-J cut away all the references, innuendos, and grandstanding, they excel in simplicity. The album’s clear highlight is “Last Year”, a tender duet that trims the excess to tell a direct tale of heartbreak. The song finds Alt-J in a state of growth, finally managing to wring tension out of a slower ballad, creating a palpable sense of longing.

It would have been easy for Alt-J to continue making albums that followed a standard pattern, and in that regard, Relaxer represents ambition and a willingness to take chances. The downside is that it finds the band in a state of confusion, pulled in all directions and sacrificing a sense of cohesion. Alt-J’s first two records were built off of their comparisons, and on Relaxer they work to forge their own identity. They just haven’t figure out what that is yet.