Better Call Saul Inches Towards Breaking Bad on Its Own Terms

Can the AMC hit continue striking a near-perfect balance between spin-off and prequel? 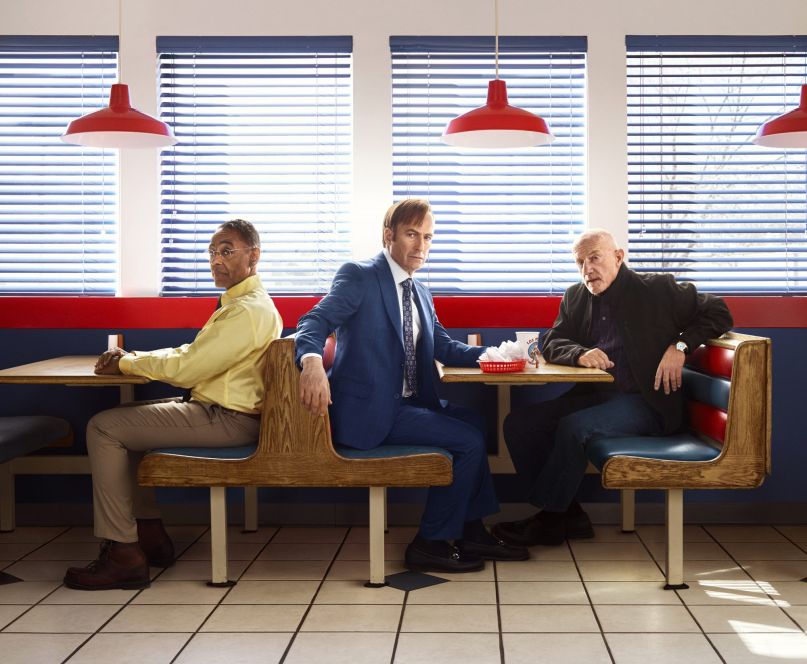 Note: The following preview takes into account the first two episodes of season three. No spoilers are contained that every fan of the show doesn’t already know.

“If I’m lucky, a month from now, best-case scenario, I’m managing a Cinnabon in Omaha,” Saul Goodman (Bob Odenkirk) tells Walter White in the penultimate episode of Breaking Bad. The next time we see the two-bit, bench-ad lawyer, he’s nervously hunched over a blender wearing a Cinnabon visor and a manager’s name tag that says “Gene.” That otherwise mundane, series-opening scene had to make Saul-aholics wonder precisely how Better Call Saul would unfold – and to what end. A glimpse into Saul’s food-service future suggested that his spin-off might deliver even more than the “prequel with visitors from the Breaking Bad world” that co-creators Vince Gilligan and Peter Gould had originally promised viewers. However, that curious opening did little to answer the most imperative question at that time: Could a series where all roads – at least in the back of our minds – are paved in Blue Sky and lead to a chemo-soaked chemist cooking meth in a camper stand on its own?

As the premiere of Saul’s third season looms, audiences no longer question if the intersecting, back-scratching lives of odd couple Jimmy McGill (Saul’s birth name) and gruff, laconic Mike Ehrmantraut (Jonathan Banks) can command their own series. Gilligan and Gould have fleshed out these Breaking Bad supporting characters in as colorful a fashion as Saul’s taste in business attire. And, most critically, the creators never reduce the show to being a mere account of where Saul and Mike were before they became entangled in the exploits of Walter White; the show’s first two seasons have been about who they were and the journey they undergo to gradually become the characters we meet in Breaking Bad. In Saul’s case, it’s the story of Cicero’s own “Slippin’ Jimmy” struggling against his huckster nature in order to go legit, or at least find some colorful middle ground, and in Mike we see an ex-cop crawling out of the bottle after his son’s murder in order to protect and provide for his family. These are not idle characters merely awaiting their cues as storyboarded in another series. Both men are making enemies, taking actions they can’t undo, and choosing paths from which there may be no return.

And the muddying world Gilligan and Gould place Jimmy and Mike in only amplifies the anguish of these personal journeys. Michael McKean’s brilliant turn as electro-phobic older brother Chuck McGill grew far darker and more twisted in season two as additional brotherly baggage got unloaded, and Kim Wexler (Rhea Seehorn) became even more indispensable as a guide in Jimmy’s life who both admires his street smarts and encourages him to become a better person, all over leftover “squat cobbler” no less. In Mike’s case, we’ve gotten to see him as “Pop-pop” and witnessed him bleed his heart dry to his daughter-in-law about his part in his son’s death, a moment that perhaps makes us understand why the granite hitman softened toward Jesse near the end of Breaking Bad. And the callbacks have mostly been innocuously aimed at hardcore Breaking fans: Mike’s pimento sandwiches, shots of Zafiro Añejo, and Saul’s sexcapades as a Kevin Costner lookalike all subtly enriching the world. Did Jimmy’s Raggedy Ann and Andy knuckleheads need to skateboard abuelita first into Tuco, or did Hector Salamanca’s skull-toed nephews need to loom over Mike’s swimming granddaughter, Kaylee, from an adjacent building? Probably not. Though, you can argue the first scene demonstrates Jimmy’s knack for getting in and out of boiling cucumber agua while the second further reveals the provocations that can drive Mike to take “full measures.”

But let’s get down to brass tacks: Chuck has Jimmy’s forgery confession on tape, somebody has been surveilling Mike, and the biggest reveal of the series thus far takes place in the season’s second episode, “Witness”. And all the credit goes to Gilligan and Gould for making the first development by far the most intriguing. If you’ve paid any attention to trailers and promo materials or have been nerdy enough to unscramble the first letters of the second season episode titles, you already know that the courteous chicken man cometh and that he’s got a piqued interest in both Mike’s talents and targets. But nobody outside that writers’ room knows for certain why Chuck secretly taped Jimmy and what he intends to do next. The brotherly ebb and flow between them remains the show’s greatest drama, each devious act, scathing confessional, and painful bit of backstory further poisoning the waters between the two. As fun as it may be to see a main player from Breaking Bad appear and signal another step closer to a collision with Walter White’s world, heed my Shakespearean prediction: The tape’s the thing.

That’s not to say that the arrival of an old favorite won’t land for audiences. It’s just that they can expect that character to have to patiently wait for his cue in Mike’s story, not the other way around. And this may be where Breaking fans start to get anxious. If you love how Mike’s methodical character always does his homework and works through all calculations multiple times before striking, then you’ll appreciate the road season three seems to be steering him down. The payoff here isn’t in the reveal but in the patient waiting game he plays in these early episodes, which includes calling in Jimmy in perhaps the most conspicuous undercover operation ever conducted in a fast-food joint. For this writer’s Monday night entertainment value, it doesn’t get much more poetic than Mike tailing a car making pickups throughout the night, an unknowing moonlit glimpse at his future. And, really, these two episodes are a microcosm of the dilemma Gilligan and Gould face moving forward. As Better Call Saul starts incorporating more and more of the Albuquerque we’ve seen through the Walter White saga, will the creators have enough discipline to remain focused on the stories of Jimmy and Mike and seek out a conclusion that satisfies and feels like the end of its own remarkable journey rather than a mere baton handoff to Breaking Bad?

There are plenty of reasons to have faith in Gilligan and Gould’s judgment; thus far, two seasons and a couple episodes with only a few hiccups stand as incredibly strong evidence. But let’s not forget about that Cinnabon manager, Gene. Season three revisits him early on and takes a surprising turn. It’s a reminder that the series may be doing more than just funneling all of us towards meth labs, cartels, and the Aryan Brotherhood. Saul Goodman walks out of that vacuum cleaner store’s basement, too. Best-case scenario for this series, maybe he doesn’t live out the rest of his days managing that Cinnabon in Omaha.