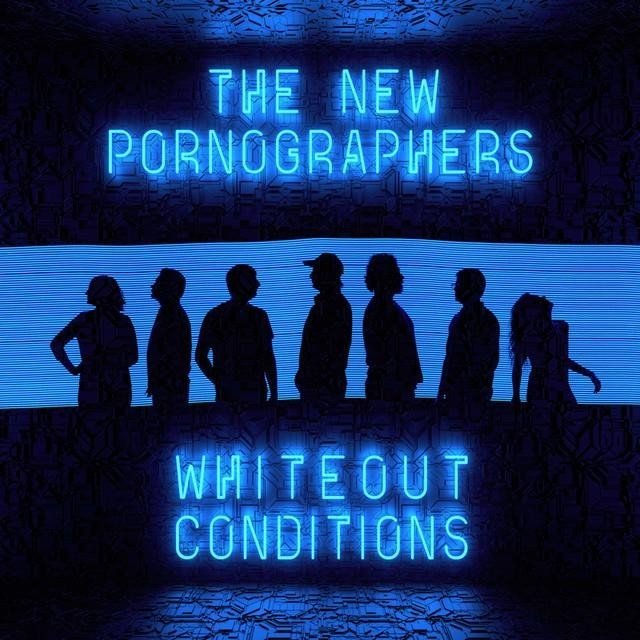 There was a moment in the early 2000s when it seemed like all the cool bands came from Canada – Arcade Fire, Broken Social Scene, Death from Above 1979, Tegan and Sara, Islands, and Wolf Parade, among others. Some of these bands never quite recovered from that first burst of acclaim, either going on hiatus, disbanding, or (arguably) losing the plot. Amid these changes, indie veterans The New Pornographers have served as a comforting constant, producing a steady stream of quality albums since their classic 2000 debut, Mass Romantic.

Often misleadingly dubbed a “supergroup,” the Pornographers gravitate around the central creative force of A.C. Newman, who has been well-served by a terrific cast of musicians throughout the years. The group have boasted both the vocal talents of Neko Case and the singing-songwriting contributions of Dan Bejar, the prolific figure behind Destroyer, though he doesn’t appear on their latest, Whiteout Conditions.

For many, their previous effort, Brill Bruisers, marked a strong return to power-pop form after a mellower turn on a few albums (Challengers and Together) that some found underwhelming after the technicolor triumph of 2005’s Twin Cinema. Whiteout Conditions shares much of the sonic palette of its predecessor, with most of the songs having a kind of taut sound that resembles recent work by The Strokes and Phoenix more than the NPs of yore. But the closest analog might be Electric Light Orchestra, with peppermint swirls of synth, crunchy guitars, vocal effects, and occasional bursts of faux-orchestral strings and horns,

The record opens with a pair of quick highlights, where “Play Money” finds Case in fine vocal form, and the record’s title track sees Newman working from a more personal place as a lyricist. Later, “Colosseum” features Newman’s most inspired singing of the album, with an assured delivery that sounds like if Josh Homme fronted XTC, while the mournful duet “We’ve Been Here Before” is by far the most disarming musical moment on the record. The song occupies the same musical space as “Nearly Midnight, Honolulu” on Case’s last solo album, sounding like something out of glam high-school musical.

That said, though Whiteout Conditions has its charms, its rewards aren’t as frequent as on Brill Bruisers. It is not as dynamic, does not swing as much, and lacks the immediate melodic appeal of Brill’s bigger earworms. The album starts losing steam after the first couple tracks, with too many moments driven by repetitive eight-note power chords that drag after a while and don’t vary much from track to track. The lyrics are sharp enough, but the sound is not; everything sounds a bit too processed, especially the drums, which have a dulling, deadening effect on the overall feel of the album. This, of course, is the artistic intent, but it doesn’t quite lend itself as well to Newman’s songwriting as he hopes.

The choice to opt for a more “muscular” sound has the effect here of muting individual musicians’ contributions, which are so evident on The New Pornographers’ strongest albums, whether on the more shambolic, rockier numbers or on the more sweeping ballads. Some of the songs feel too sterile and Pornos-by-numbers; others are derivative in a way the band rarely is. Overall, it would have been more successful as a five-song mini-LP than as a full-length. Perhaps it is a sign of The New Pornographers’ talents that Whiteout Conditions, an album that might be perfectly acceptable from another band, feels like a letdown. Maybe that’s the burden of being a band best known for consistency.