Death underlies the message and intense, cathartic sound of the band's seventh record 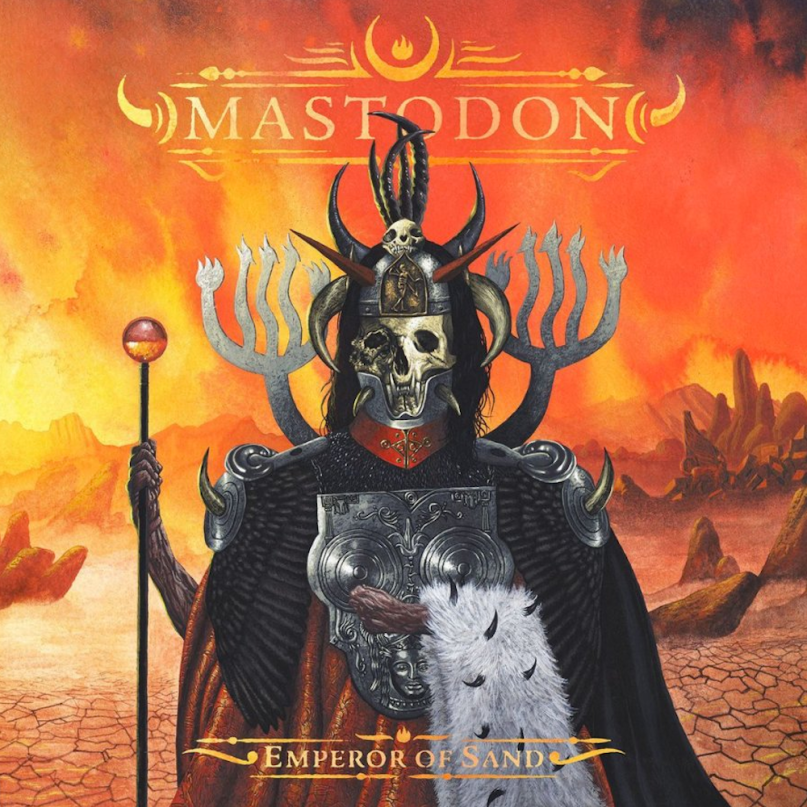 Love and death are the deepest wells for a songwriter to mine. Unfortunately for Mastodon — though it has deepened their songwriting — close-to-home illness and death underlie the lyrical ruminations and intense, dynamic musicality on the quartet’s powerful seventh studio album, Emperor of Sand.

Mastodon, throughout their 17-year career, have proven themselves a band both heavy and heady and rarely heavy-handed. These consistently strong new songs, produced by frequent collaborator Brendan O’Brien, are a solid, thoughtful entry from a band whose genre-crossing, time-bending blend of hardcore, doom, and prog metal has earned them a rightful place among the upper echelon of the metal elite.

With three vocalists and stellar shredding all anchored by the jazzy, complex, and odd rhythmic moments mining elements of sludge and prog (think Rush), Mastodon are metal at their core, and they tick many of the “traditional” metal “boxes.” It’s no accident three of the band members appeared in a Season 5 episode of Game of Thrones: Like the show, Mastodon are masters of epic, far-reaching, often fantastical drama. Game of Thrones is to TV as Mastodon are to metal — beyond cult, below mainstream, rabidly devoured, large in scope, and dissected and worshiped by their faithful masses.

Emperor of Sand is dedicated in loving memory to Catherine W. Keilliher, mother of guitarist Bill, and on songs like the groove-y “Precious Stones”, the message seems clear: “Don’t waste your time/ Don’t let it slip away from you … if it’s the last thing you do.” Likewise, “Roots Remain” closes with the poignant philosophical observation “The end is not the end you see/ It’s just the recognition of a memory,” but not before a creepy lyrical recitation concludes, “The end / The end.” Not exactly easy listening, but Mastodon thrive on challenging themselves and their audience. Let’s not forget that the band released Leviathan, a concept album based on the novel Moby Dick, as well as a trio of linked concept records.

While Emperor of Sand has roots in painfully personal stories, the record kicks off with “Sultan’s Curse”, and in fact, the entire album seems like it could be turned into a graphic novel or video game. Brann Dailor describes the theme: “A Sultan in the desert hands down a death sentence to this guy.” As he tries to escape, the sun steals his energy, “so he tries to telepathically communicate with these African and Native American tribes to get rain to pour down and kill it.” Insert devil horns hand emoticon here.

On a purely musical level, “Show Yourself” is the album’s showstopper — and anomaly. It’s mainstream, mid-tempo, and radio-ready, yet with the core of Mastodon integrity. A departure, likely to be divisive, but in short, a great, memorable song. It’s likely the only one to gain the band new fans; Emperor of Sand will engage the faithful, but this tune has the potential to reach out of that box.

Reflecting on the nature of time with sand as the hourglass, “Steambreather” references The Nazca Lines, huge ancient geoglyphs in the desert of southern Peru, while “Ancient Kingdom”, which at times sounds like Soundgarden, Motorhead and Faith No More, boasts lyrics Iron Maiden would be proud of: “When the Sultan gives order to take your head/ You must ride the wind to safety, or you’ll end up dead.”

From the incendiary solos of “Word to the Wise” to the evocatively personal/universal lyrics (“The throne of maladies/ It’s right in front of me/ Your malignancy”), Emperor of Sand proves cathartic for the listener and, hopefully, for the band members as well.

Essential Tracks: “Show Yourself”, “Word to the Wise”, and “Roots Remain”