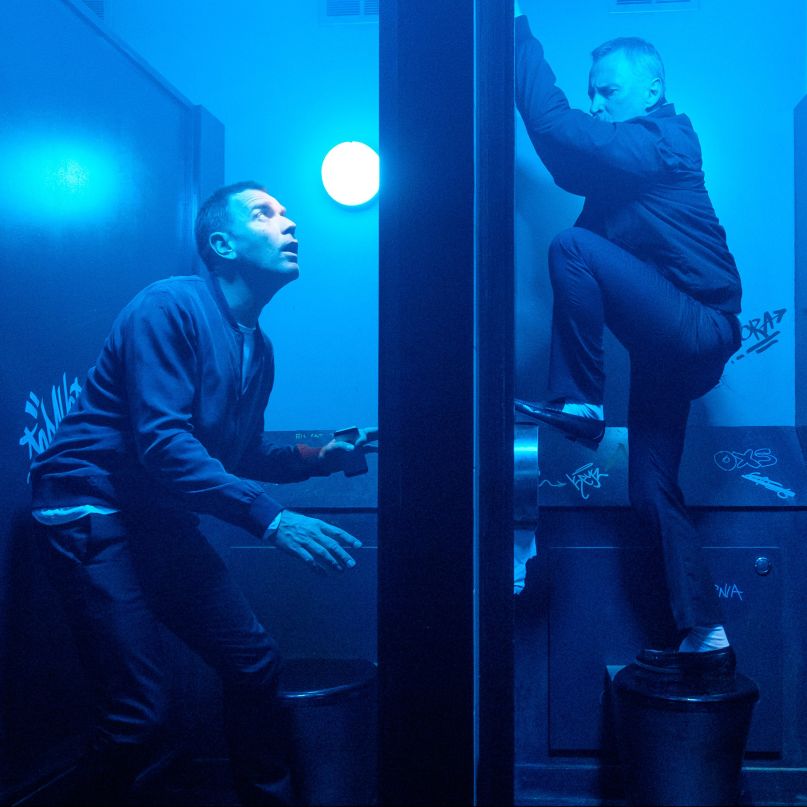 For as much as the bawdy depravity of Trainspotting was a big part of its transgressive appeal to audiences in 1996, Danny Boyle’s adaptation of Irvine Welsh’s novel about heroin addicts in Edinburgh, Scotland, was never the celebration of drug addiction that some accused it of being at the time. It also wasn’t really an after-school PSA either, though, which is why it’s arguably one of the most honest films about compulsive drug abuse ever made. Renton and Sick Boy and Spud and Begbie and poor, poor Tommy weren’t saints or sinners; they simply were. They careened through life as the young do, in the throes of reckless abandon, and just happened to suffer the affliction of being addicted to one of the filthiest drugs for which a person could ever develop a taste.

But even movie characters grow old, and the only distinction between the returning antiheroes of T2 Trainspotting and most of the others is that we never have to see it. But in Boyle’s return to Scotland, age is every bit as relentless and unsentimental as it is for anyone else. While it’s not initially clear why Mark Renton (Ewan McGregor) has chosen to return to the place he barely escaped with his life (and a bag full of £12,000) two decades prior, there’s immediate pain in seeing how much has changed. He returns home, and his mother has long since passed. Edinburgh is a bit glossier now, trapped in the same old-vs.-new world battle as so many other modernizing European cities. And Renton isn’t getting any younger, and as the film’s cold open suggests, all the exercise in the world isn’t helping him stave that off either.

T2 Trainspotting makes the effective case throughout that nobody ever truly changes, and if it’s a cynical approach, well, these are cynical people. Sick Boy is now just Simon (Jonny Lee Miller), and he’s moved laterally in most respects; he’s not doing heroin anymore, but he’s taken to cocaine with vigor, and he spends his days blackmailing rich philanderers with the help of Veronika (Anjela Nedyalkova, terrifically charming and a perfect fit within the cast), who’s less his girlfriend than his criminal accomplice, even if Simon insists otherwise. Spud (Ewen Bremner) is estranged from his wife and daughter because of his own continuing habit and lives in a slum. Begbie (Robert Carlyle) is still Begbie, in all of his chaos and violence, but the better part of 20 years in jail have turned him into the kind of man who’s sustained primarily by his memories of who he once was.

As one might expect, especially given the first film’s conclusion, Renton’s return proves contentious. Spud is elated to see his friend, if resentful of the money that Renton left him to assuage his guilty conscience. (“What’d you think I was gonna do with £4000, Mark? I was a fucking junkie.”) Simon loathes Mark, not only for robbing him but for breaking an unspoken brotherly code between them, even if Renton’s line in the first film about how “Sick Boy would’ve done the same to me, if only he’d thought of it first” rings as true as ever. That’s to say nothing of Begbie, who breaks out of jail at the beginning of the film with the intention of dragging his softspoken teenage son into the “family business,” which seems to be whatever Begbie decides it is on any given day. He’d probably kill Renton where he stood if he knew the man was back in town.

(Interview: A Morning with Danny Boyle: On Trainspotting, Nostalgia, and Reuniting with Ewan McGregor)

Recovery is integral to T2’s appropriately sprawling story of small-time crime committed in the service of more than heroin. Spud is sober, but only in the sense that he crawls into a corner at night and stares in terror at a bag of drugs instead of shooting up on it; it’s the constant burden of his life even after the habit concluded. For Renton, recovery is moral and ethical instead, a way of letting go of the past by harnessing one’s most compulsive behaviors. (Hilariously, Boyle reimagines him as an exercise junkie, the kind of guy who goes on leisurely 10-mile runs and talks about how good it is for the spirit.) But recovery is also relative to the people doing it, and before long, T2 sees its wayward souls lapsing back into the habit that really kept them all hooked over the years, even beyond the drugs: the sense of camaraderie that young men enjoy until they have their own lives. Since none of them have really accomplished anything more, it’s back to scheming before long, this time with the pipedream of turning Simon’s run-down bar (“the great wave of gentrification hasn’t hit us yet”) into an all-purpose brothel. Of course, this hardly goes according to plan, and soon the double-crossing, races through the street, and all-around grift have taken hold of the crew anew.

The brothel hustle forms the spine of T2 Trainspotting, but it’s every bit as much a narrative MacGuffin as the “great skag deal” was years before. The film allows Boyle and its leading men to return to what turned out to be a wellspring of blessings for all involved, to poignant and frequently hilarious effect. John Hodge returns as screenwriter, and though T2 is admittedly heavy on callbacks, they’re employed here with a resonance that many sequels never even attempt. When Renton launches into a reprise of the “choose life” soliloquy during a dinner with Veronika, it’s imagined less as a snotty rebuke of polite society’s hypocrisies than as the honest anxieties of a middle-aged man who sees the world becoming ever more self-obsessed and knows it’s going to happen with or without his consent. Through the film’s loping conversations, Hodge manages to bring Welsh’s terrible foursome into a new era without it growing cloying, centering the film around the simple truth of what time does to even the brightest-burning spirits and how little people truly change throughout their lives.

(Ranking: Every Danny Boyle Film From Worst to Best)

Likewise, Boyle seems invigorated by the opportunity to reunite his cast. The typically stylish filmmaker’s affectations are in full effect throughout T2, but with a haunting undercurrent. Though the film is largely episodic in its storytelling, Boyle gives vivid life to even the simplest moments, whether in a striking sequence of relapse or the use of washed-out 35mm-esque photography for the film’s numerous flashbacks to its protagonists’ youth. (These flashbacks are the closest the film comes to lapsing into outright schmaltz, but they’re infrequent enough to disregard.) Boyle works in a riot of stylistic flourishes, but for all the projectile vomit and tawdry sexuality, some of his best work comes in the more muted sequences of the film. One particularly effective setpiece sees Spud walk out of a boxing gym, after trying to take it up at Renton’s insistence as a sobriety method, onto the street where the original film’s iconic “Lust for Life” opening took place. As Boyle wistfully layers an atmospheric reduction of Underworld’s “Born Slippy” synth line beneath the action, the film makes one thing perfectly clear: Time has elapsed, and there’s no true going back.

Yet, time doesn’t have to dull every sensation. The soundtrack is choice, as you’d might expect, and largely full of new selections, aside from a Prodigy remix of “Lust for Life”. Boyle ably walks a line between looking back (Blondie, The Clash, Queen) and ahead (Wolf Alice, Young Fathers), while keeping true to the cacophony that made the original soundtrack a classic. And the film’s performances feel appropriately lived-in without relying entirely on pre-existing fondness for their effect. Miller and McGregor carry a majority of the film, and their interplay is as sharp as ever, Renton and Simon slipping back into their naturally easy friendship even as they conspire and wonder who’s going to screw the other first. Bremner escalates Spud’s nervous physicality to great effect, reprising his bug-eyed turn while adding a weary exhaustion beneath the pratfalls. Even Carlyle, who gets the most typical story line of the returning cast (Begbie struggles with family and impotence in the face of aging), digs back into the character with feral glee, capturing him as something of a sputtering engine attempting to reignite by sheer force of will.

For a sequel in which many familiar faces and locations are reprised, T2 Trainspotting is unusually candid about the hazards of looking backwards for too long, especially by sequel standards. Boyle’s second outing is less about reassembling a cast for a nostalgia piece than about the evils of that same kind of nostalgia, when left unchecked. At one point, Renton, Spud, and Simon go visit an old friend’s grave, and Simon coarsely observes that “This ain’t a funeral. Nostalgia, that’s why you’re here. You’re a tourist to your own nostalgia.” For Boyle and Hodge, ceaselessly obsessing over one’s glory days is its own corrosive kind of addiction, the kind that makes filmmakers return to dry wells and everyday people fixate on how much they’ve lost instead of what’s left to be gained. Like any other vice, it’s only as good or evil as the person indulging in it.

What’s remarkable about T2 Trainspotting, then, is how deftly it traffics in that very nostalgia and refutes it in the same breaths. In one sense, here’s a sequel to a ‘90s classic that trades heavily on audiences’ appreciation for that previous film. In another, here’s a film that uses that fact in service of an insightful, affecting commentary on how there’s no choice in life but to either move forward or to not. It’s wistful, but not in any kind of dishonest way; after all, it’s still a movie about a bunch of ex-junkies trying to get rich through legally dubious means. But now the boys are men, and regardless of what plans they may have had for themselves, they’re beholden to all the life obligations of men. As Renton once put it, they chose life, families, cars, careers, and all the other modern comforts that the rest of the world gets to enjoy. But those can’t fill the void any more than the heroin did when taken up by such restless souls.