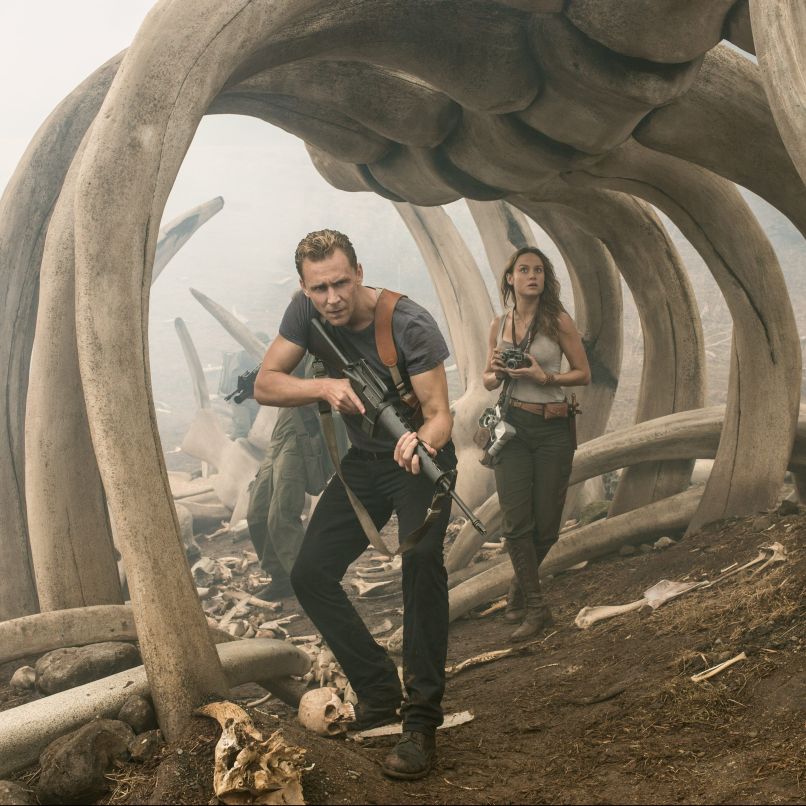 Kong: Skull Island returns to the roots of the great monster movies in at least one key respect: it understands the appeal of these movies as a reminder of humanity’s relative insignificance in the face of horrors it can’t possibly comprehend. The distinction of the Kong mythos has always been that, where Godzilla is a creature born of man’s hubris and anger, Kong is a passive force that is acted upon, rather than acting itself. Every time Kong’s island has been invaded since the dawn of cinema, it’s been by those seeking glory or profit. And now, in the case of Skull Island, war.

Jordan Vogt-Roberts’ reset of the Kong legend returns to 1973, as the last American troops are pulling out of Vietnam. Colonel Packard (Samuel L. Jackson) is reluctant to leave, suspended in a moral crisis as the war draws to its close and those who survived are left to wonder what they accomplished, if anything. His right-hand man Chapman (Toby Kebbell) looks forward to returning home, as do the other remaining members of their helicopter squadron (Shea Whigham, Jason Mitchell, Thomas Mann, and Eugene Cordero). But just when they’re getting ready to ship out, the order comes in for one more mission: a surveillance and land-mapping expedition.

The operation is requested by Bill Randa (John Goodman), a bellowing representative of the Monarch organization, a shadowy government body. With his team of researchers (Corey Hawkins and Jing Tian), Randa intends to pursue his hollow-Earth theories by investigating Skull Island, a land mass perpetually surrounded by violent storms, on the assumption that there may be undiscovered life left to find. (After all, if we don’t find anything, what’s stopping the Russians from beating us there?) Randa hires James Conrad (Tom Hiddleston), an SAS vet and skilled tracker, to guide them around the island, and Mason Weaver (Brie Larson) to chronicle their findings. Then, as tends to be the case in these situations, the choppers start a bombing raid with what Randa calls “scientific instruments.”

However, there are many things on Skull Island, and none of them seem to care much for the presence of helicopters blasting “Paranoid” and dropping bombs. It’s not too far into Skull Island that the giant ape of the hour makes its first appearance, and when it does, Vogt-Roberts pivots the film’s generally adventurous early scenes into something far more grim. Kong’s first attack on the military convoy is a bracingly violent sequence, starting with a quick crescendo of dread as a tree is slowly hurtled into a helicopter and spiraling into a horrific panic as helicopters are swatted out of the air and bodies fly into the sky. It’s visualized with an unsettling immediacy, the rare crash sequence that captures the sensory overload and frantic desperation of a freefall. It’s the first time that Skull Island shocks the viewer with its unusually frank violence, and it’s hardly the last.

There’s something bold about Skull Island, particularly by the standards of the modern franchise starter, in its willingness to chase such a singular tone. Kong: Skull Island isn’t the first giant monster movie to mine the genre for its grander political implications, but they’ve rarely been foregrounded as they are here. Vogt-Roberts and the film’s screenwriting trio (Dan Gilroy, Max Borenstein, and Derek Connolly) play out the conflicts of Vietnam in ways both effective and occasionally troubling, analogizing the panic of the fractured post-attack survivor groups as they attempt to collect themselves and figure out how to get off the island. But even as they try to rally (the film has a welcome handle on the intelligence of its characters at most points), there’s more on the island that will kill an outsider than just Kong.

The period setting is used for all it’s worth throughout Skull Island, in the effectively on-the-nose soundtrack (CCR, The Stooges, Jefferson Airplane) and in the film’s grander themes. As Packard sets out to hunt the ape as retribution for his many men lost in the initial crash, and James and Mason start to observe that maybe there’s more to Kong than his murderous introduction might have suggested, Skull Island does its best to update the man-vs-beast conflicts that have characterized all Kong stories since 1933 by rooting that drama in the blood-soaked anxiety of war. Some audiences will likely be put off by this approach; given how feverishly Vogt-Roberts leans into the film’s grislier creature-feature aspects, it may read as distasteful. But like any reasonably thoughtful genre film, there are moments in which the parallel works, the cycles of war on both the island and in other parts of the world factoring into how the characters handle the existence of Kong.

The island is richly bathed in color, of both the natural and post-production varieties, and while Skull Island’s splashy aesthetics do occasionally smack of trailer-readiness, there’s a unique quality to the island that certainly sets it apart from Peter Jackson’s equally lavish modern reimagining. The creature designs are impressive and disgusting in equal turns, particularly with the eventual unveiling of the “skullcrawlers,” another indigenous species and Kong’s greatest rival. (There’s also a grotesque sequence involving a giant spider that nicely nods to a famed deleted scene from the original King Kong.) And Kong itself, a motion-capture collaboration between Terry Notary and Kebbell, is yet another strong achievement in the field, a detailed and physically emotive creation even at the impossible, mountain-height size the film imagines him. Vogt-Roberts saturates all of this in vivid swatches from scene to scene, from the nauseous green fog of a boneyard to the exaggerated magic-hour oranges of an island sunset. It’s showy, but in the film’s creature-flooded world, it works.

The game cast isn’t asked to do as much lifting as the visuals, especially given the talent on hand, but Skull Island understands the Aliens argument for having memorable actors in even the smallest parts of a good action movie. Few of the characters are built upon any more than their introductions, but the rapid survival-adventure cadence of the film makes this less noticeable, especially when the most memorable creation emerges a bit later: Hank Marlow (John C. Reilly), a crashed WWII pilot who befriended the native tribes of the island and waited for years for rescue to come. Reilly plays the part with a spot-on mix of mania and sorrow; in the middle of an effects-heavy story about giant apes, he’s a kid who became a man on the island and still wants to go home and watch a Cubs game. The others are fine, but stick to expected beats: Goodman growls and deadpans, Jackson fills his eyes with rage, Larson brings an understated kindness to her underwritten empath, and Hiddleston runs around in a gas mask killing flying creatures with a sword.

The cast and film feel overstuffed at points, even after Skull Island takes no shortage of great pains to cull the group throughout, but the film is the kind of monster movie that predominantly works because of its understanding of the genre. Marlow acknowledges that the locals see Kong as a god, and while Skull Island is hardly subtle in its message, Vogt-Roberts makes it stick. Nature is the king of all, and our compulsive need to conquer all corners of the known universe will be our undoing. But perhaps the most satisfying thing about the film is what comes after, when you stop to realize how darkly comic and sickly fun the film was after you’re done reeling from all the impaling and dismemberment. Kong: Skull Island won’t be the last we see of this new great ape, but it’s the kind of savagely enjoyable throwback that’ll leave you wanting more.