Josh Tillman delivers a beautiful album about how mankind doomed itself 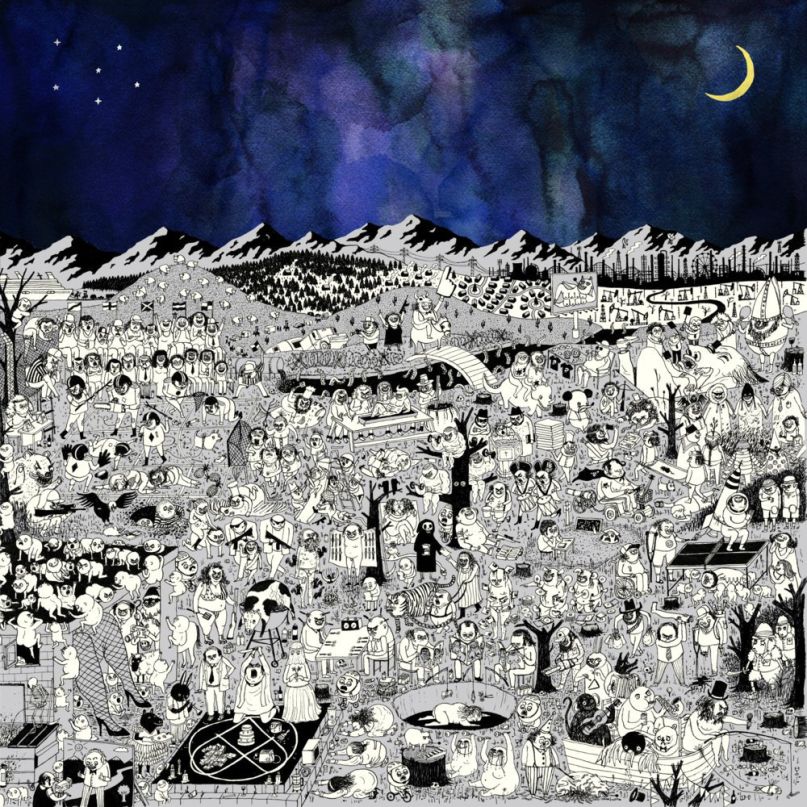 In a seemingly indefinite era of noise (fake news, social media, you name it), a man who gets it can be king. At minimum, philosophers can prove to be radicals by simply telling us what we should already know. The problem is that, all too often, we just don’t care.

Josh Tillman, for one, has noticed how numb we’ve become (or maybe always were), and his moniker/music project/character-come-to-life, Father John Misty, isn’t having any of it. Misty’s new album, Pure Comedy, meditates on, and makes the case for, life not being some whimsical comedy of errors, but a tragedy so unbelievable you can’t help but laugh. Misty says as much in his own stunning 1,800-word essay about mankind’s profound misunderstanding of its own survival. The fact that humans were given the chance to live in a potential utopia and instead squandered its legacy by creating hierarchies and carrying out violence against one another — all to please some mysterious Sky-Man, as Misty puts it — is outright ludicrous and so impossibly self-aggrandizing that life, above all else, has to be “some kind of demented joke” because nothing else makes any sense.

Pure Comedy wastes no time getting to the point. Its eponymous song opens the album with a verse that summarizes where the singer-songwriter’s mind is at: “The comedy of man starts like this/ Our brains are way too big for our mothers’ hips/ And so Nature, she divines this alternative/ We emerged half-formed and hope whoever greets us on the other end/ Is kind enough to fill us in/ And, babies, that’s pretty much how it’s been ever since.”

Not all of Pure Comedy’s tracks go after the bizarre experiment of life as directly as that, though some definitely do. At one point, Misty suggests taking God on a quick tour of his insane handiwork, none of which he should be especially proud of, given that we were more or less assumed to be created in his likeness. Meanwhile, the overall theme gets a more granular exploration on songs like “Total Entertainment Forever”, which starts with “Bedding Taylor Swift every night inside the Oculus Rift” and eventually gets to “No gods to rule us/ No drugs to soothe us/ No myths to prove stuff/ No love to confuse us.”

Misty’s most poignant line on the album isn’t his funniest, wittiest, or prettiest. Instead, it’s a rather direct address to God. On the appropriately titled song “When the God of Love Returns There’ll Be Hell to Pay”, as a distant, eerie melody rolls in the background, the man just comes out and calls out our supposed creator: “This place is savage and unjust/ We crawled out of the darkness/ And endured your impatience/ We’re more than willing to adjust/ And now you’ve got the gall to judge us.”

On the pop culture scale of existentialism, Pure Comedy falls somewhere between Terrence Malick’s The Tree of Life and Garth Ennis’ Preacher. The album spins best when Misty is picking a fight with God or observing human nature as a screwball play, all while honoring the fact that people were given a raw deal in concept, not just execution.

That’s the duality of the Misty persona: one half an artist delivering truths of self and world and the other half a sardonic spirit. That is until the seriousness weighs upon him so heavily that he’s forced to exhale it all with a joke. In interviews, his answers bounce between sincere and deadpan, and this album reflects that philosophy with rhythm and nuance. Tillman’s moniker identity hints at playing Twainesque in some strange contemporary light, though Pure Comedy doesn’t have anything like the warning that features on The Adventures of Huckleberry Finn: “Persons attempting to find a motive in this narrative will be prosecuted; persons attempting to find a moral in it will be banished; persons attempting to find a plot in it will be shot.”

Instead, on the 13-minute opus “Leaving LA”, which features some of Pure Comedy’s sharpest, most introspective observations, Misty laments: “At some point you just can’t control what people use your fake name for.” Misty seems too self-aware, and therefore too self-critical, to embrace tropes or revel in praise, which makes the dissection of his output such a curious trial. In the multiverse, there’d be a dimension where Tillman became Misty at heart and didn’t pursue a showman-as-shaman career. Rather, he’d be a supper club pianist, more folklore than folk rock, playing songs that poke fun at the rich diners who tip him, with a lone waitress as the only one who understands him and eventually gets the word out.

In this reality, however, Pure Comedy seems like the logical next step after Misty made headlines at last summer’s XPoNential Music Fest, when he found it impossible to perform the night after Donald Trump spoke at the Republican National Convention. In that onstage outpouring of sincerity, Misty told the outdoor audience: “Like, I cannot play ‘Bored in the USA’ for you right now. No no no, because guess what? I soft-shoed that shit into existence by going, ‘No no no, look over here. Put your self-awareness on. It’ll never actually be that bad because we’re too smart.’ And while we were looking in that direction, stupidity just fucking runs the world because entertainment is stupid. Do you guys realize that? Like, that, at the core, entertainment is stupid. You’re welcome.”

A moment later, he admitted that, while what he’s telling the crowd is the absolute truth, “it’s not particularly catchy.” It’s that instant that may best sum up what Pure Comedy was meant to eventually be, a terrible truth you can sing. For Misty, it seems the division between art and entertainment has become way too conspicuous, and this is him sewing them together. There’s power in art and there’s fun in entertainment, but the former could easily become a lecture and the latter can be written off as just killing time.

It might even be more settled an issue than that, a bigger one, too. Whether God built man or man built God, someone along the way didn’t think creation all the way through. So it leaves you wondering if it’s possible to have gallows humor for the decline of western civilization. Whatever the answer may be, Father John Misty wants you to take in your surroundings with honesty and ask questions along the way. In your darkest human moments, you can laugh, but you shouldn’t laugh it all off. You, like the rest of us, are part of the joke.

Essential Tracks: “Pure Comedy”, “Leaving LA”, and “When the God of Love Returns There’ll Be Hell to Pay”