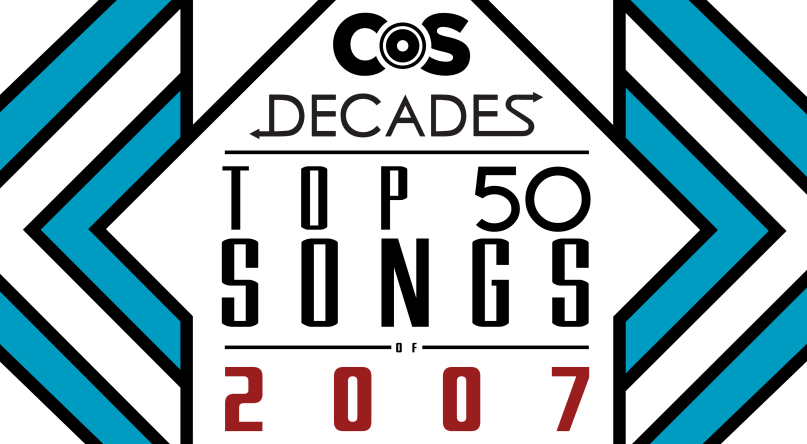 Decades is a recurring feature that turns back the clock to critical anniversaries of albums, songs, and films. This month, we dial it back to the top 50 songs of 2007.

Ten years is enough time for a song to infiltrate the consciousness of music fans and for us to really evaluate what that song means to us. Though 2007 was dominated by indie rock albums, the songs that stand out were so much more ambitious than the groups making them initially came across. Maybe that’s why the years following 2007 would find some of these indie acts like Arcade Fire, Bon Iver, LCD Soundsystem, and The National becoming rock and roll luminaries, while other artists like Rihanna, Radiohead, Foo Fighters, and Kanye West saw some of their best-known material surface in that year.

How far did the ripples spread? Well, if you said LCD Soundsystem’s “All My Friends” became an anthem of a generation, you wouldn’t be wrong. Alt radio found a few of its staples in songs like “Kids”, “The Pretender”, and “Dashboard”, while Rihanna’s “Umbrella” was a pop breakthrough that would turn the rising star into a household name. Justice’s “D.A.N.C.E.” was an electronic game-changer that helped usher in the age of rave music hitting the big stages at festivals. “Can’t Tell Me Nothing” is as likely to be heard at a sports event as on the radio, while songs like Spoon’s “The Underdog”, The National’s “Fake Empire”, and Band of Horses’ “No One’s Gonna Love You” increased their exposure through widespread television syncs. These weren’t just songs that bounded leaps ahead of their artists’ previous work. They are songs that have become cultural moments.

The following are 50 of the best from a particularly strong year, songs that might make you feel old and will definitely make you wonder whether music has (and can) reach these heights again.