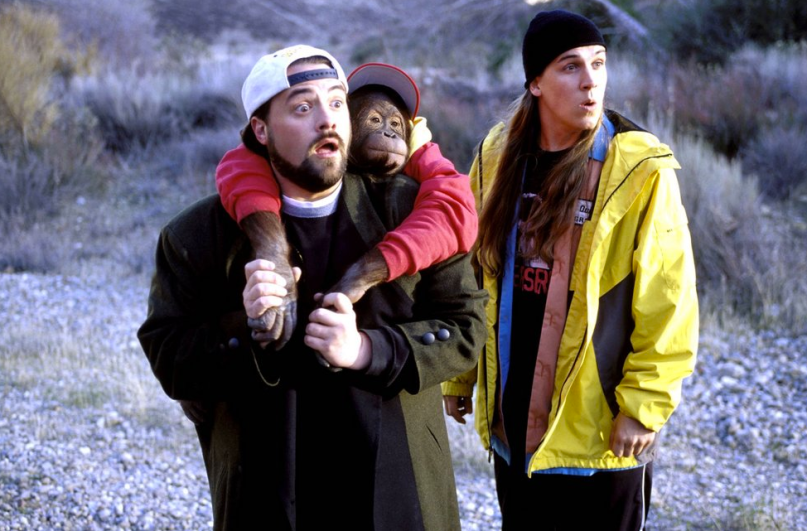 The writer/director had put aside his View Askewniverse (which includes films like Chasing Amy, Mallrats, Clerks, and Dogma) for his True North trilogy (Tusk, Yoga Hosers, and the as-yet-unreleased Moose Jaws). But over the last two years, he’s tried to return to the world of Jay (Jason Mewes) and Silent Bob (Smith) with a third Clerks film and a Mallrats sequel TV series.

However, Smith has now revealed that Clerks III has been canceled due to the loss of a lead actor, and six networks have passed on the Mallrats show. Still, working with the Askewniverse characters revitalized his interest in the stories that launched his career. While he doesn’t own the rights to Clerks or Mallrats, the stoner duo of Jay and Silent Bob are his intellectual property, so he began working on Reboot.

Smith describes the film as “a fun flick in which the Jersey boys have to go back to Hollywood to stop a brand new reboot of the old Bluntman & Chronic Movie they hated so much. It’s a tongue-in-cheek, silly-ass satire that pokes fun at the movie business’s recent re-do obsession, featuring an all-star cast of cameos and familiar faces!” He says his pitch was well-received by Miramax and he hopes to start filming this summer.

Of course, fans might want to take Smith’s optimism with a grain of salt. After all, he sounded confident about Clerks III and Mallrats, and we’ve seen how those played out. He was also super excited to work on a TV reboot of Buckaroo Bonzai before bowing out in November. And there’s been no word on Moose Jaws for some time. That said, Jay and Bob are his babies and his property, so there should be far less red tape in getting a new movie made.