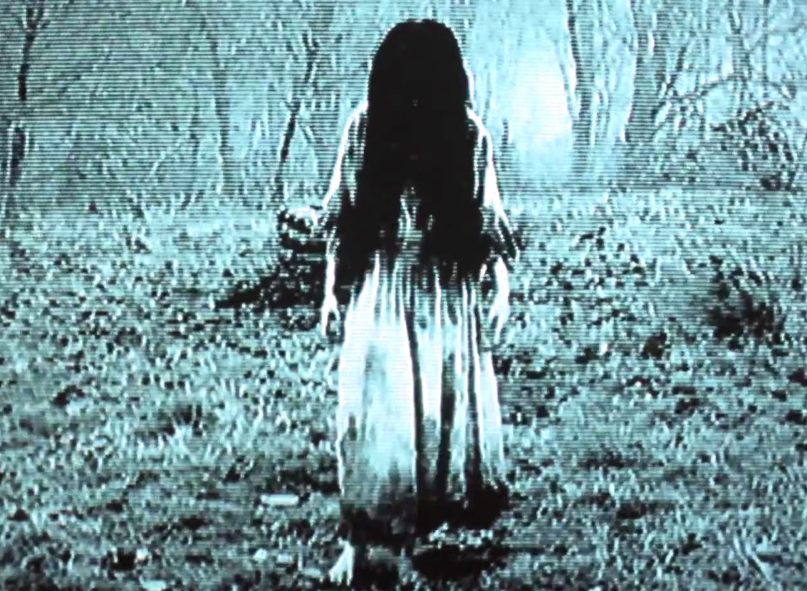 The Ring’s American and Japanese interpretations, released in 2002 and 1998, respectively, contained within them the seeds that gave birth to Creepypasta, the campfire ghost stories of the digital age. With Samara’s tape, we had cruel, uncanny imagery, a ghoulish, mythologized figure, an unhappy ending, and the presence of modern technology, this latter aspect being an especially potent and relevant part of the storytelling. In retrospect, that helps explain why the 2006 sequel’s odd emphasis on culling horror from CGI deer was so unsatisfying; the VHS tape’s role in the affairs was more interesting than the monster.

For a bit, at least, Rings seems to correct the mistakes of its predecessor. Early on, director F. Javier Gutiérrez (Before the Fall) emphasizes its millennial cast’s reliance on modern technology, from smartphones to Skype. And it isn’t long before we see Samara, still hiding behind that mop top, manifesting on iPhones, laptop displays, and flat screens (curious how she can’t walk through doors, though, huh?). Sure, that may sound silly, especially considering it was the vintage aspect of VHS that gave the original much of its mystery—an unmarked VHS will always appear more ominous than an app-packed smartphone—but it’s a logical next step for a movie so reliant on technology.

That kind of modern thinking is prevalent in the early going, especially in the way Gabriel (Johnny Galecki), a college professor, develops an academic interest in the Samara phenomenon, which by this point has become an urban legend. Intriguingly, Gabriel views it not as a threat, but as proof of an afterlife, a concept he hopes to explore further. After hunky (and hilariously named) “Holt Anthony” (Alex Roe) and his blank slate of a girlfriend, Julia (Matilda Lutz), get involved, the trio discover a new video hidden within the original’s digital file, this one seemingly targeted directly at Julia. And here’s where things slip back into the bottom of the well.

The difference between the tape from the original and the video here is emblematic of what’s wrong with the movie as a whole. While the original used the investigation into Samara’s origins as a pursuit, it never allowed the mystery itself to overwhelm the horror. There’s an affectedness to the original’s footage (especially when compared to Ringu’s), but it still achieves the uncanny in the disconnections of its imagery; only frames of it can be culled for hints as to Samara’s history, while the rest of it is merely the disturbed detritus of a damaged mind. The video in Rings is all artifice, as if it were trying to emulate a ‘90s Tool video. Even worse, it posits itself as nothing more than a puzzle to be solved. Each frame is relevant to Julia’s journey, effectively stripping it of anything either threatening or horrific. Monsters, it turns out, aren’t very scary when they want your help.

As with much of modern horror, a desultory hunt for answers results in another elaborate mythology to accompany the swampy origins already divulged in the first two movies. “So, you wanna know about Samara Morgan?” a character asks at one point, prompting any horror lover to shriek a fierce “no!” back at the screen. The best horror movies are propulsive, built around threat and action rather than exposition and mystery. When will modern makers of mainstream horror realize that horror can be something other than an origin story? Monsters rarely need to be understood.

So, yes, the script is bad, which isn’t all that surprising when you see it went through three writers and the last one was notorious Hollywood hack Akiva Goldsman. Gutiérrez is better, if only because he has a strong grasp on tension and release; that said, at least 70% of the movie’s scares are either fake-outs or nonsensical stings, with spirits haphazardly manifesting whenever the studio calls for another shrieking blast of strings to rattle the audience into thinking that’s what horror movies are supposed to do.

Galecki brings with him the kind of mild smarm he can’t play on The Big Bang Theory, but Roe and Lutz are almost comically bland. Lutz’s Julia is nothing more than a screenwriter’s panting sprint to the finish line, a character marching from one discovery to the next while declaring every revelation with the most leaden, unimaginative dialogue. Vincent D’Onofrio gets to chew the scenery as a blind heavy, but there’s barely room to flex in his short scenes.

In this modern age of horror it’s best to resign yourself to the reality that hitching one’s self to an established franchise is one of the only ways into the business. Fede Alvarez executed an original vision under the Evil Dead umbrella, after all. And there’s a place for a Ring sequel in this modern, tech-obsessed time, but Rings is too beholden with current trends to truly exploit the potential it displays in its early going.

“You were never afraid of her,” one character says to another near the end. It’s meant to be a moment of admiration, but it’s instead a reflection of the audience itself, who have nothing at all to be afraid of here.