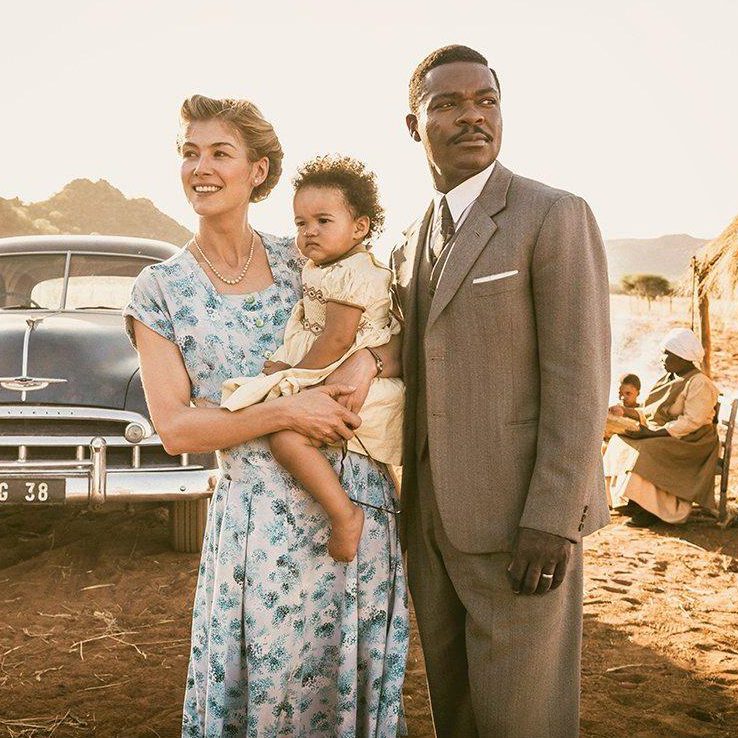 The following review was originally published as part of our coverage of the 2016 Toronto International Film festival.

There’s a scene in the early moments of A United Kingdom, right before Seretse Khama (David Oyelowo) meets the woman who will change both his personal and political destiny, where the soon-to-be king of Bechuanaland discusses his future with his friends and fellow countrymen. He’s recently completed his time as a law student in London and has been summoned back home by his uncle, the regent, to lead his country in their independence movement and appears to be feeling a little ambivalent about the prospect. But this, his friends remind him, was always the plan: learn from the colonial powers and then use their own methods against them in the quest for independence.

It’s a tactic that, on a meta level, the film also employs by taking the well-crafted, glossy historical film – a medium that has often celebrated Great Britain as the hero of colonial adventures – and uses it to explore the United Kingdom’s reign from the perspective of those it oppressed and exploited. As smart as that position is, though, it only works when the film itself is of equal or better quality than those films that preceded it. Thankfully, director Amma Asante is more than up to the task. Her latest film might not offer anything particularly new, but it’s a thoroughly competent and inspiring take on the genre.

Based on – and fairly faithful to – the true love story of Seretse and Ruth Williams Khama (Rosamund Pike), A United Kingdom first introduces the couple to audiences, and each other, at a dance in London. The sweet chemistry between the Bechuanaland prince and the British clerk is immediately evident as they giggle over bad jazz, and it carries the film through their charming courtship filled with record exchanges, dancing dates, and the first hints of opposition to their interracial relationship.

That undercurrent of racism explodes on both an individual and institutional level when Seretse proposes to Ruth and asks her to join him when he returns to Bechuanaland. Ruth’s parents disapprove; Seretse’s uncle, aunt, and sister do as well, although issues with having a foreign white ruler in their country are thoughtfully presented as the legitimate concerns that they were. The South African government, on the verge of making apartheid a national policy, vehemently opposes the idea of an interracial union in a neighboring country. And England, who has both mining concerns in the region and a protectorate relationship with Bechuanaland, attempts to thwart both the union and Seretse’s reign.

Following the couple’s almost decade-long fight for love and country, through exile, the births of their children, and continent-spanning turmoil, A United Kingdom hits all of the necessary emotional notes and political intrigue of a solid historical drama. Pike is warm and resolute as a woman who loves her husband and is determined to help him fight for his country (and her story, in Asante’s assured hands, carefully avoids any white savior nonsense). Oyelowo is both regal and vulnerable as Khama, showing even more range and power than he did as Martin Luther King Jr. in Selma. Together, they form a pair that encourages sympathy in their sweetly playful private moments together, and cultivates a believable gravitas in the public sphere.

Asante, who last stunned audiences with her nuanced take on the life of a multi-racial woman in 18th century England in Belle, brings similar skill and perspective to this look at 20th century England. She occasionally risks sentimentalizing her heroes too much – although that is arguably a fault of the genre, as much as a fault of this particular film – but her handle on their history remains deft throughout. A United Kingdom is a strong testament to – and maybe even a continuation of – the Khamas’ legacy.