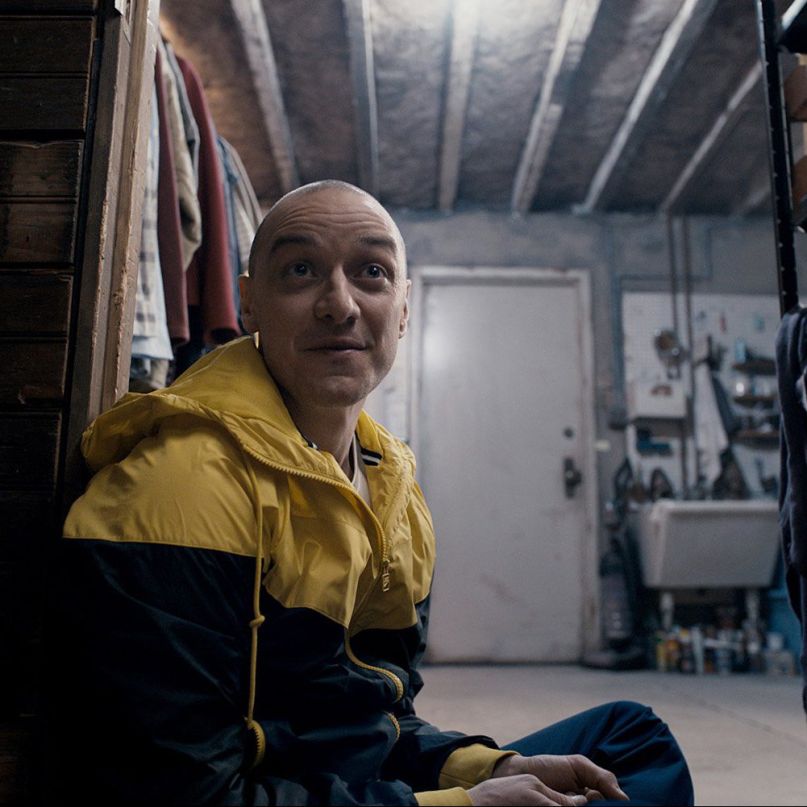 Note: The following review has been published based on an early screening at the 2016 Fantastic Fest.

Dissociative Identity Disorder (D.I.D), a more politically and scientifically correct way of saying “multiple personalities,” has been employed in genre filmmaking for decades.  From Psycho to Dressed to Kill to High Tension, the disorder has been used as a twist, a plot device, or simply as an opportunity to showcase the talents of a film’s lead actor.

Split, the latest thriller from M. Night Shyamalan, belongs to the latter group. In a clear attempt to slough off the stiff prequel-ness of the X-Men series, James McAvoy plays Kevin, a man who’s suffered from D.I.D for nearly his entire life.  His personae, or “alters,” range from sweet (a 9 year-old Romeo) to terrifying (an OCD adult with a penchant for young women). Two of Kevin’s alters, the more violent of the bunch, kidnap a trio of teenage girls while they sit in a parked car. The girls soon find themselves in an underground bunker, left to the devices of their truly unhinged attacker. What follows is a cat-and-mouse tale in which Casey (Anya Taylor-Joy of The Witch) uses her own history of trauma to try and outsmart the multi-faceted villain and find a way out.

Shyamalan ingeniously places his leading man front and center, where McAvoy amuses and horrifies as the cliché plot points occasionally stumble. At times Kevin and his alters are surprisingly funny, and McAvoy employs long pauses and slight movements of the eyebrows to great effect. In others, his transformation takes over his entire body. His shoulders, gait, and mannerisms all shift as a new alter takes control. The actor moves between these characters seamlessly, and McAvoy’s range is a joy to witness.

Shyamalan, for his part, lets McAvoy’s scenes play out in long takes, allowing us to marvel at his craft. This is an area where the director is truly comfortable. He has always made great use of theatrical tableau framings; The Sixth Sense, Unbreakable, and The Village all played out in beautiful, wide-shot sequences. For the most part the framing in Split is tighter, but the theatricality remains. The pacing is at McAvoy’s mercy, and he keeps the film moving along. At its best, the tension in Split comes in the Pinter-esque pauses between McAvoy’s fits of insane dialogue.

At the same time, the film sees the director moving away from his reliance on that theatricality and toward a more classical kind of thriller. Part of this clearly comes from the film’s limited budget, as the film finds Shyamalan working again with low-budget horror maestro Jason Blum. With last year’s Blumhouse-produced The Visit and now Split, we see how these limitations are helping to form a much more playful and experimental genre filmmaker. Gone is the blockbuster floundering of The Last Airbender and After Earth. In its place, we see a new Shyamalan, willing to experiment with framing, editing, and narrative devices on a much smaller scale.

It’s then no surprise that the film’s major bumps come when the director leaves the confines of this low-budget, claustrophobic house of horrors. Some of the film takes place at the therapy offices of Dr. Fletcher (Betty Buckley, a nice DePalma nod), as she attempts to unravel the mysteries of Kevin’s damaged brain. These scenes are well acted and feature more of McAvoy’s genius, but they also release much of the pressure created by the film’s tenser scenes. Likewise, the inclusion of flashbacks to Casey’s traumatic past is simply clumsy, for all its narrative importance. At points it feels as though Shyamalan may have lacked the confidence to fully commit to his smaller, more locked-in thriller.

The main issue with most Shyamalan films is, of course, the twist. While the final, mind-blowing reveal of The Sixth Sense worked at the time of its release, his subsequent films have often suffered from the expectation of that new twist. His audiences have been taught not to trust a single element in his films. Could that character be dead? Is this really the time period we believe it to be? This can often cause one to resist the suspension of disbelief, and lose out on any real immersion in his films.

Perhaps the best trick of Split is how Shyamalan reveals the twist-worthy, multiple personality (D.I.D) device in the film’s first act. We are allowed to let down our guard and simply experience Split as is. Even when the film falters on a storytelling level, Split is one further step for Shyamalan on the road to cinematic redemption. We can only hope he continues to work at this level of production.