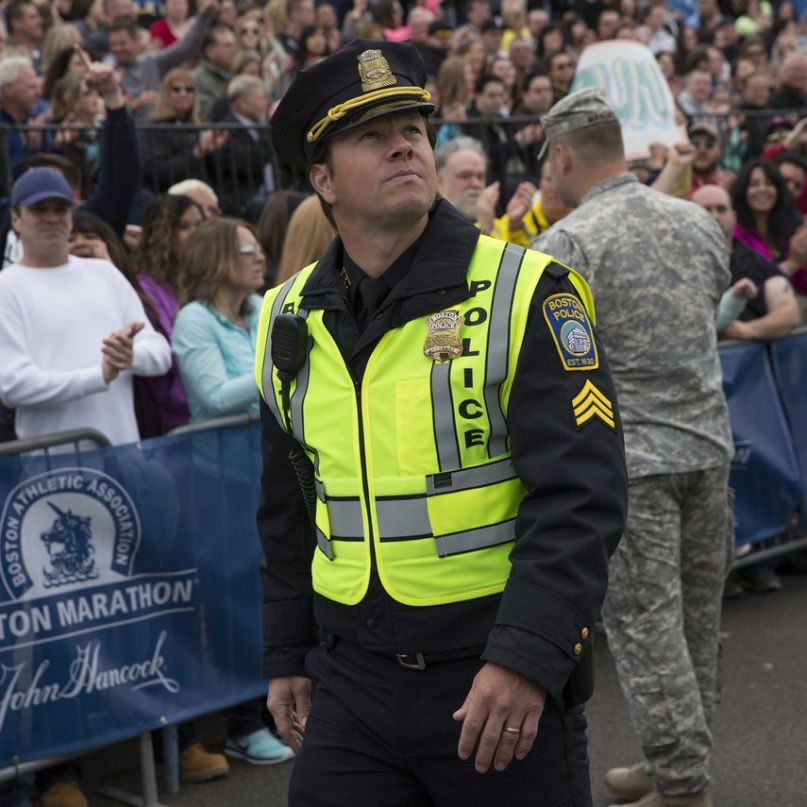 Maybe take a moment to process this. Because Patriots Day is a bit of a pickle.

Patriots Day is the well-meaning nephew of 1970s disaster films and social panic thrillers, yet it truly believes itself to be a kind of finest-hour prestige effort about everyday heroism. It’s a stylized and stout-hearted attempt to recreate one of the most heinous crimes in recent American history. But one can’t help but ponder the intent of this new thriller. What is Peter Berg’s game here? An action flick as public tribute? Should audiences be encouraged to go all Roman Coliseum over shootouts and manhunt mysteries, when the wounds of reality are still so fresh? Or has Berg cooked up something with mass appeal by trading on genre standards to reimagine a tragedy as a triumph?

The film will leave you conflicted. There are good and bad sides to practically every scene. But before arguing the very notion of art as imitation (which is so important here), we have to step back to Patriots Day’s true beginning. Boston, MA, on April 15, 2013.

The history is unnervingly fresh, so the facts should be easy enough to recall. The brothers Dzhokhar and Tamerlan Tsarnaev each left backpacks at the finish line of the Boston Marathon, intended to harm and kill as many people as possible. It was an act of terrorism and cowardice. For several days, the city of Boston went through lockdown and panic in the search for the Tsarnaevs, before Tamerlan was killed in a firefight and Dzhokhar was found and apprehended in the back of a boat in Watertown.

Patriots Day begins hours before the bombing. Berg follows the lives and stories of Boston’s commonwealth, and the people that were directly involved. There’s Jessica Kensky (Rachel Brosnahan) and Patrick Downes (Christopher O’Shea), a recently married couple who plan to go to Fenway Park, and maybe catch the race later in the day. Dun Meng (Jimmy O. Yang) is an app programmer preparing for a morning run. There’s Sergeant Jeffrey Pugliese (J.K. Simmons) from Watertown, heading to Dunkin’ Donuts for the muffin his wife asked for.Commissioner Ed Davis (John Goodman) surveys the marathon’s finish line with brassy glee. Carol Saunders (Michelle Monaghan) is an RN just trying to sleep before her next shift. And then there’s Mark Wahlberg as an amalgamation of several real-life officers in the form of Sergeant Tommy Saunders, a super-nice Boston guy with lots of screen time and subsequent good timing in the investigation. If this all sounds like the opening of a disaster movie, with characters paraded out innocently enough before the violence hits, that’s because Patriots Day comes off that way, early on. The film’s vision of Boston as a character-driven melting pot comes into focus later.

In re-enacting the bombing, Berg re-stages the event in an authentic digital manner that’s both impressive and uncomfortably anxious. He pulls punches, sparing the viewer from the most graphic violence, and yet creates a shock effect that works through other means: quick shots of panic and terror, hallucinatory debris, cuts faster than gunfire. It’s impressively staged, if nauseating in its execution.

After the blast, the film begins to resemble Zero Dark Thirty at whiplash speed, chasing the Tsarnaevs (Alex Wolff as Dzhokhar and Themo Melikidze as Tamerlan) through every corner of Boston. The FBI, local police, and government powers of Boston work together to capture them. The red-hot anger and desire for swift justice is summarized in Wahlberg’s repeated “we gotta get these motherfuckers” sentiments. The ending you already know. So how does Berg pull this off? What’s he saying about all this madness?

To start, Berg plays by his now-signature book: handheld cameras telling big stories. The man never met a piece of extraneous coverage he didn’t like, as he layers shaky photography to drive at gritty realism. Some of it is peppered with loads of security footage, to reinforce disorientation. At other points, Berg goes for a moment of relief with a visual gag, such as Pugliese fussing over a broken car in 10 shots when one would have sufficed. We won’t even start on the murky, night-set action, lit only with pipe bomb flares and the blues and reds of police lights. But they are there, and the debate over the value of shaky cinematography rages on with Patriots Day. It’s frustrating, so know that going in.

Perhaps the freshness of the story is to blame, but the film strains for urgency far more often than reflection; the photography and pacing contribute heavily to this. Patriots Day’s overall effect is one of a successfully sustained tension headache; there are stacks of information to process, the film scanning through headline after headline. One second, the FBI catches a break from street camera footage. The next, the Tsarnaevs wait anxiously in their home looking at the news. The next, the Governor declares a shutdown of the city. Bam bam bam. Scenes move fast, details quickly emerge, and little has time to register. At its best, there’s a frenetic authenticity to the plotting. But at other times it reads like schlock, recalling the pulp realism of Dirty Harry and Black Sunday. Adding to this, Atticus Ross and Trent Reznor’s score deals in the dread-heavy, unending pulse of slasher movie synths, as Tommy Saunders jumps from scene to scene, looking for leads.

Patriots Day loves its imaginary hero Tommy, arguably more than the community it wants to embolden. Wahlberg gets almost as much screen time as the rest of the film’s cast, to deafening effect. If the film is a celebration of a city coming together in the face of true terror, then Saunders as an easy, unrealistic through-line to get big parts of the story together seems cheap. He’s on the radio giving orders at the blast. He’s the one telling officers to collect phones and triaging medics. He suggests interviews with witnesses and everyone listens. He recreates the Tsarnaevs’ walking paths in his head for the FBI. As a person, he checks of all the requisite Boston clichés, calling patrolmen “chowder heads,” organizing his Red Sox cards, dragging low vowels. Wahlberg lacks the brash affection of his work in The Departed, or even Ted. Saunders isn’t a big charmer, or a gifted cop – he’s just a miraculous plot device, always in the right place at the right time.

Having a leading voice take charge and move a film along is one of the core writer’s tools. But it’s also a touch disingenuous to the true-life Boston cops who did act in 2013. Patriots Day goes to great lengths to name names, so maybe likeness rights were an issue. Or the film could just be leaning on its recognizable brand name. Regardless, this was a creative choice, which shouldn’t go unnoticed. Saunders’ total luck and shoehorned awkwardness hurt the film’s otherwise decent design. To watch a lone Wahlberg swear revenge for his community, in the style of a gruff action star, goes against Patriots Day’s better instincts.

However, Wahlberg doesn’t fully overwhelm the experience. Berg makes his points on terrorism and unity, however overtly. The local attitude, chummy conversations, authentic bit actors, and the epilogue on the value of servicemen ring true here. When Wahlberg’s not onscreen, there are tons of other people, striving and surviving against the fear. You see Berg’s best tendencies retained from Friday Night Lights on display, his respect for township allowing him to get into the crowd and try to witness their collective story. This was a moment when a ton of people worked themselves tired, together, for a purer kind of justice. Berg, through his character achievements and crowd-pleasing moments, gets at a strong Boston front.

And the locals all fight back in different ways. Meng was kidnapped by the Tsarnaevs for his car, and Berg manages to take the truth of Meng’s escape and turn it into a taut sequence with a satisfying last laugh. Pugliese tackled Tamerlan in the shootout on Laurel St., but Berg shrewdly avoids superheroism by developing Simmons as an average Joe type who smokes and cracks wise. In these moments, Berg reinforces ordinary, daily heroism. A local Bostonian offers his gun to the cops in the middle of a firefight, and as weird as it may seem, it’s another instance of the community banding together. The people of this film represent a proud, collective character vignette that not even the film’s muddled action and plotting can fully diminish.

Patriots Day sits right on the line between exploitation and tribute. The star power is dicey, and the action relentless, but Berg means well and likes the people in his recount. It aims for the kinetics of United 93 and that film’s twitchy catharsis, but audiences will find something closer to World Trade Center’s salute to brave guys using the language of modern blockbusters. This isn’t to say that Boston doesn’t deserve a tribute, but that a stronger one may well come along later on.