These anthems thrilled us and gave us hope in a messy, heartbreaking year 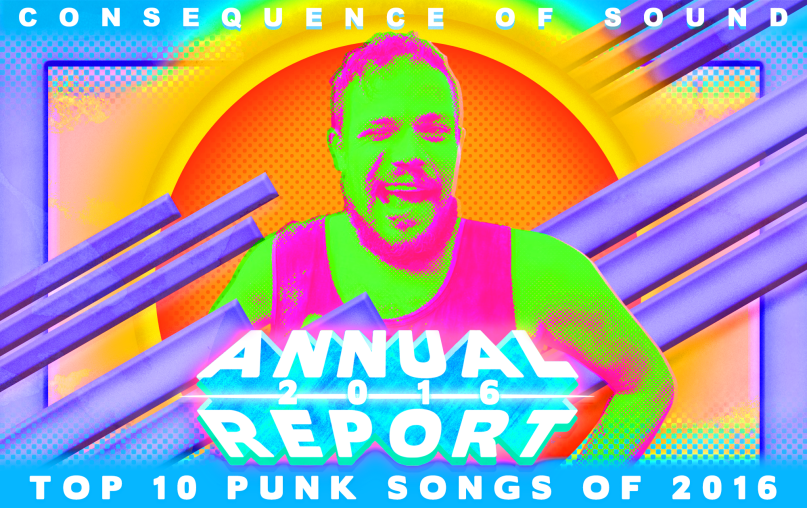 Punk as Fuck is a monthly column in which Associate Editor Collin Brennan discusses issues in punk music and culture. As part of our 2016 Annual Report, this month’s column dives into the 10 best punk songs of 2016.

First, an admission: Compiling a list of the 10 best punk songs of any given year is an absurd challenge, if only because punk’s relatively crude means of production ensures that there’s still so much out there left to be unearthed. Online streaming sites like Soundcloud, Bandcamp, and even YouTube present a steady flow of singles and practice demos from such far-flung locales as Morocco and Northwest Indiana, the sum total of which cannot be calculated nor consumed in the span of 365 days. Choosing to highlight just 10 songs from this vast and largely untapped library also seems a little counterintuitive, as punk rock has always stood apart from the mainstream forces of music that would seek to rank and reward records according to their sales figures, media hype, and other imperfect barometers of quality.

Alas, I can’t help myself. Talking about punk rock in any capacity seems like an important way to recap the dominant trends of 2016, a year dominated by political upheaval, the ongoing perpetuation of systemic injustices, and the promise that the worst is yet to come. These elements have combined to create a sense of anxiety that seems to permeate every aspect of our modern discourse, and anxiety happens to be the fuel that has powered punk rock’s three-chord engine for the last 40-odd years.

Punk and anxiety have always had a symbiotic relationship, the former giving sound and voice to the latter in the form of the Sex Pistols’ calls for anarchy, the Dead Kennedys’ fear of secret police, and any number of other instances over the decades. This year alone brought us examples of anxiety expressed through self-hate and vitriol (PUP), frustration with millennial apathy (SLØTFACE), and outright violence against cops (G.L.O.S.S.). One of the year’s very best records, Jeff Rosenstock’s WORRY., took up anxiety as its central theme.

With that in mind, here are 10 songs that express, in some small but vital way, what the hell was going on in punk in 2016. These are anxious and messy and heartbreaking songs for an anxious and messy and heartbreaking year, a year in which our faith in each other and in our own ability to effect change was tested. None of that goes away when we throw out the old calendar, but at the very least we can take stock and celebrate some of the scene’s successes before sizing up the next fight.