Composer of the Year: Cliff Martinez 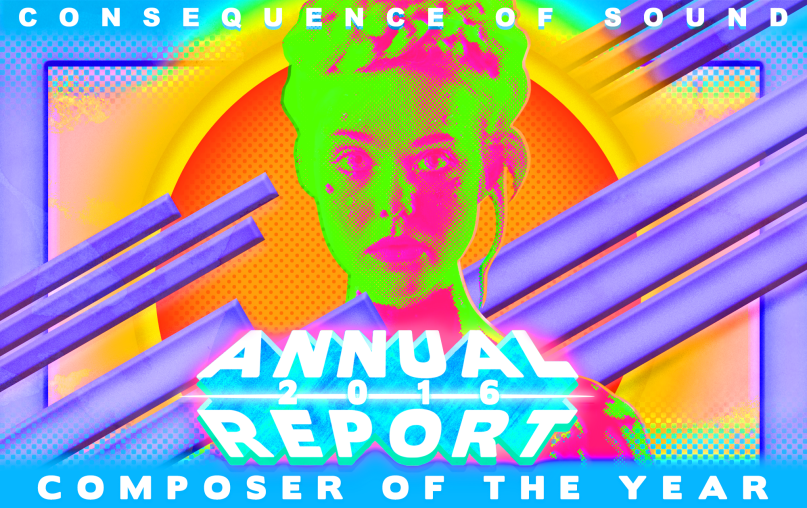 “I can’t sing, I can’t dance, I can’t write … no real talent,” Elle Fanning’s Jesse reflects, while gazing out at the stars and lights that hover above Los Angeles. “But I’m pretty, and I can make money off pretty.” Her aspiring photographer, Dean (Karl Glusman), stares hypnotically nearby, bathed in purple glows and greenish hues. There’s a magical shine to the moment, as if someone’s blowing fairy dust off from the side. We don’t see it; we hear it: the sparkles, the ambiance, the embalming bass, the transformative synths. This world belongs to composer Cliff Martinez as much as it does to director Nicolas Winding Refn.

The Neon Demon marks their third collaboration together — fourth, if you count Liv Corfixen’s documentary My Directed by Nicolas Winding Refn — and continues to add a flavorful touch to Refn’s stoic ouevre. Looking back, each one of Martinez’s scores has served as a ghostly narrator of sorts, haunting the filmmaker’s trademark long shots with an ambient glaze that’s both meditative and comforting. With 2011’s Drive, he highlighted the film’s salient moments, adding pathos and intrigue to Ryan Gosling’s silent, tortured hero who says everything by saying nothing at all. For 2013’s Only God Forgives, he truly stretched his muscles by influencing the loose, mostly silent narrative with his emotional textures.

Similar clemency applies to The Neon Demon, only his sounds are pushed even further into the foreground. It’s a sensual mix of industrial dark disco and supernatural ambiance that not only draws in viewers but slowly subverts their expectations. The opening title track, for instance, is eerily seductive with its taunting, tranquil rhythms before it ultimately blasts straight on to a blood-stained dance floor. The pulsating theme recalls the brazen scores of Goblin, who similarly paired with filmmaker Dario Argento on a number of his psychological horror films. Much like their work, Martinez rarely indulges in the on-screen terror, opting to layer Refn’s stylish cannibalism and shocking ultra-violence with lush electronica that’s always beautiful.

“I think Nicolas and I both like really synthetic, artificial, inorganic, synth-driven music,” Martinez says. “We didn’t talk about it a lot, but that was our personal preference. I knew that Nicolas was a big fan of Brian Eno and Kraftwerk. I’d say before I even saw anything, there was probably some inkling of the style and flavor it would take on. But after that, the film kind of shapes and dictates what the score will do in a lot of ways, certainly in how you structure the music. A lot of elements of the film, like it being a horror film, made it, I think, different from my other scores, because I’ve never really done anything where people kill and eat one another [Laughs].”

Then again, The Neon Demon is not your average horror film.

“People are saying ‘horror film’ out of convenience,” he adds. “It doesn’t even become that until you get to the home stretch. So much of the movie is not that; I don’t know what to call it. Nicolas says that the first half is a melodrama, whatever that means. And the second half is a horror film, and we all know what that means. I underestimated the comic effect of the film, which I usually do. I always underestimate that element of the film until I see it in front of an audience.”

Listening to the score, it’s easy to place Martinez’s dreamy sounds alongside formidable electronic heroes of the cinematic past, whether it’s the far-reaching sonic landscapes of Tangerine Dream or the interstellar glitz and glam of Giorgio Moroder.

“As far as the dance element in the film, all I thought was, you know, Boom ch boom ch boom,” he says with a laugh. “That’s as far as I got. I wasn’t really thinking of Giorgio Moroder or Donna Summer. None of them came to mind because Nicolas temped the film from top to bottom with the music of Bernard Herrmann, so it didn’t really help me too much, except for placement of the music. Most of the ideas happened all by my lonesome. I don’t feel like I was influenced by anything in any specific way.”

Martinez admits that the catchy theme actually came to fruition fairly late in the process.

“I had this idea early on. I called it ‘Sparkles’. It was basically the idea of a musical gesture that sounded like something twinkly or sparkly,” he explains. “It was gonna be in a bunch of the other scenes, and then at some point I saw the title sequence and the end sequence, and I went, ‘There they are! There’s the sparkle. There’s the glitter!’ And I thought, Okay, that’s the way it’s supposed to work. You’re supposed to communicate with the director by way of mental telepathy. So it was a weird anticipation of something that I obtained later that I seem to have had in my head. I wish that would happen more often.”

There’s undoubtedly a spiritual link between Refn and Martinez. Talking to the composer, it’s easy to see why the filmmaker has subscribed to his methods for the better half of a decade. They’re both concerned, or rather deeply invested, with concepts that inspire their audiences to warm up parts of their brain. As Martinez contends, “When you get into somebody else’s head, into a place where the audience isn’t prepared to be — that’s all really powerful stuff.

“Part of the job of music is to universalize the story,” Martinez continues. “Nobody wants to watch a movie about really normal people doing normal things. They want to watch something that’s really out of the ordinary, but they want to relate to it nonetheless. You have to touch them and make it seem like at some point it’s their lives. That’s the gig.”

Of course, it’s a little more complicated than that. “For the most part, you have to make a decision as to whose point of view is the music going to project,” Martinez continues. “For most of the film, I felt like I wanted to get inside Jesse’s point of view. Then there’s the audience’s point of view. A lot of times, I resisted doing that — like the gold paint scene.

“That’s kind of a yucky, male predatory, exploitative scene,” he digresses. “That’s the obvious point of view that I think the audience might take. But I think, for the photographer, and for Jesse, they’re just having a great time, and I’m gonna play it like that. Just this wonderful artistic collaboration between the two of them. I thought that would be a little more perverse and interesting.”

Point of view is crucial to Martinez and explains why he has a strong working relationship with filmmakers like Refn, Steven Soderbergh, and Harmony Korine. These are visionaries that are heavily invested in showing over telling, and so much of that leans on the power of music. That’s not something Martinez takes lightly; it’s what has informed every piece of his music and what he’s been committed to for a very long time.

“With [Soderbergh’s] Traffic, I really noticed that one of the effects of so-called ambient music was that it seemed, at times, to take on the point of view of some omniscient overseer who wasn’t judging what was going on,” he says. “I call it the God POV, because it seems like, even though people are doing drugs and murdering one another and doing awful, evil things, the music is just saying, ‘This is what happens on planet Earth.’

“I thought Spring Breakers was another good example of that, even though I think Harmony [Korine] was going for a little bit of the shock of the drugs and the nudity and the craziness and the violence. The music either took on the point of view that this was the characters’ idea of a good time, or of the omniscient, nonjudgmental overseer, looking on dispassionately, but nonetheless paying attention to everything.”

One of the many beauties about the music for The Neon Demon is how Martinez blurs those points of view with echoes of traditional pop. Because of this, the score isn’t strictly beholden to the film; it exists on its own. The way the groovy title track weaves into the more pacifying textures is emotionally gratifying in the same way any pop record ought to be. As such, listeners can wrestle with this score as they would with an effort by, say, Nicolas Jaar, Julia Holter, or even M83.

How often can you say that about a film score these days? It’s become a rarity. As more and more Hollywood filmmaking goes to the trenches with sequels, reboots, and remakes, so does the scoring. Sadly, there just isn’t an insistence for signature scores in those areas anymore, at least not to the scope and level that there used to be. Who’s to blame for this? At the end of the day, the fault rests on the shoulders of the filmmaker, whose job is to recognize that art and forge a bond. That’s why you have to appreciate creative marriages like Burton and Elfman, Nolan and Zimmer, and, in this case, Refn and Martinez.

“We’re just matched in terms of our tastes,” Martinez says. “I like his films. They’re always kind of un-Hollywood. They’re a little bit unusual; they’re atypical. They kind of defy the audience’s expectations more often than your average film. His films are always to me kind of flamboyant and atypical — and he’s also a very music-centric director. He has progressively highlighted music more and more with each successful film. That’s been a great challenge.”

But it’s been worth it every time.