U2 at the End of the World: Berlin and the Making of Achtung Baby

U2 went to Berlin in search of history. In its absence, they found a new way forward 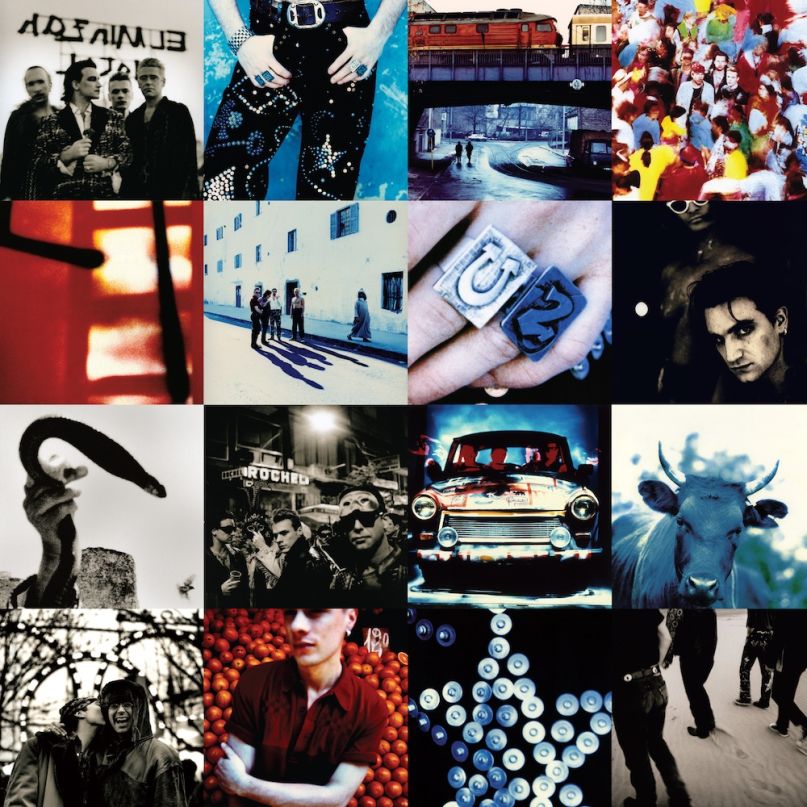 Dusting ‘Em Off is a rotating, free-form feature that revisits a classic album, film, or moment in pop-culture history. This week, Collin Brennan revisits U2’s historical trip to Berlin and what the band learned there.

When U2 arrived in Berlin on October 3rd, 1990, they were a band engaged in a very self-conscious pursuit of history. Their plane touched ground within hours of formal German unification, a process that had begun nearly a year earlier with the fall of the Berlin Wall on November 9th, 1989. The tired energies of the Cold War and the Soviet-occupied German Democratic Republic — which had included the economically strained eastern half of Berlin — had been put to rest, and new energies were rising to take their place.

It’s easy to imagine why such a historical moment might have appealed to a band like U2, with the one qualification that there has never been a band like U2. The quartet had become self-assured to the point of self-delusion following the massive success of 1987’s The Joshua Tree, a cinematic pop masterpiece that took up the vast, wide-open spaces of America as its principal theme. Critics like Robert Hilburn of the Los Angeles Times hailed them as “the greatest rock ‘n’ roll band in the world,” finally bestowing upon them the status they had dreamed of (and felt they deserved) from day one.

But the U2 that came to Berlin in search of history were not the untouchable megastars they had seemed just a few years earlier. Pride comes before the fall, and the band’s ballooning opinion of themselves had finally burst with the release of their grotesque, grandiose rockumentary Rattle and Hum in 1988. Critics and fans alike recoiled at a group that acted like they were bigger than God and a frontman, Bono, whose bleeding-heart sincerity was beginning to blur with his own overfed ego. “It really is hard carrying the weight of the world on your shoulders,” he joked while accepting a Grammy for The Joshua Tree, though it no longer sounded like much of a joke.

And so it was that U2, faced with a damaged reputation and an audience grown weary of their auto-erotic myth making, decided to end one chapter of their career and begin another. But the story of Achtung Baby is not a story of a humbled and contrite band retreating to Europe with their tails between their legs. On the contrary, Bono, Edge, Adam Clayton, and Larry Mullen Jr. were off looking for some of that same magic they had once found in the American desert, desperate to reclaim their status as the world’s most important rock band but keenly aware that the rules of rock had changed in the three years since The Joshua Tree.

By 1990, musical tastes were shifting away from the sweeping stadium rock of The Joshua Tree and settling closer to the fringes of the mainstream. Youth culture had birthed the rave scene and its accompanying electronic dance groups, while industrial bands like KMFDM and Nine Inch Nails reveled in a darker, more chaotic vision of the world. Though Nirvana’s seismic major-label debut, Nevermind, would not come out until September of 1991, grunge had already emerged as a viable force of nature by the time U2 arrived in Berlin, and it was a force diametrically opposed to their own brand of overblown, self-mythologizing rock music.

U2 knew that their choice was to change or die, and because the latter was unthinkable, they opted for the former. But the fact that they settled on Berlin as the place of their rebirth only proved that hubris was still a guiding force in their collective decision-making. In Berlin, the band saw a once-fractured city in the midst of profound change, a place where history could be felt and observed as an almost physical force.

For more than 40 years, Germany and its capital had been spliced in two, victimized by their own violent past, caught in the struggle between two global superpowers, and unable to move beyond the repercussions of the Second World War. All of this suddenly changed in the fall of 1989, when the wall dividing the city fell and Western liberal democracy finally, decisively triumphed over Marxist-Leninist communism. A new era was taking shape in Berlin, and U2 wanted to be a part of it.

It takes a certain kind of audacity to not only place oneself at the center of the history, but then to expect the narrative to fold in some kind of predictable, linear fashion. Audacity had always been one of U2’s strong suits — it’s what made The Joshua Tree so great — but they were in for a rude awakening when they landed in Berlin and found a confused, lethargic, emotionally ambivalent city instead of the kinetic wonderland they had anticipated. Another reason they had settled on Berlin was the presence of Hansa Tonstudio, where David Bowie had recorded part of his famed “Berlin Trilogy” of albums in the shadow of the Wall. But the ghostly presence of Bowie had long since dissipated, and U2 failed yet again to find the magic they were so desperately looking for.

This is perhaps the real story of Achtung Baby, U2’s best album by a wide margin and the first album on which they really begin to doubt grand narratives — both their own and that of history itself. The Joshua Tree set out to paint a cinematic portrait of America that fused the country’s politics and landscapes, and it largely — unthinkably — succeeded on its own terms. Achtung Baby, conversely, set out to capture the spirit of a newly free and chaotic Berlin but eventually settled on telling a scattered, haphazard, and altogether more interesting story in which they — not history — are the main players.

Which isn’t to say that Berlin’s presence cannot be felt on Achtung Baby or that the city had a negligible effect on the album’s eventual shape. The very first track, “Zoo Station”, is named after the subway stop and former transfer station where one living in the time of the Wall could take a train from West to East Berlin. The band must have thought it a fitting metaphor for the song itself, which introduces the new U2 with a bracing, distorted guitar riff and industrial drumbeat that together form the most abrasive moment in the band’s entire catalog. This was U2’s self-conscious way of calling out their own “transfer,” as it were, moving not so much from East to West but from a bright and earnest past to a dark, dangerous, and even sexy future.

“Zoo Station” and other notably off-kilter tracks like “The Fly” and “Ultraviolet (Light My Way)” showcased a band willing to poke holes in their own grandiose image, even as they never truly sacrificed the high-stakes rock ‘n’ roll that made them so compelling in the first place. Being in Berlin — and having the city fall so short of their preconceived notions — fueled the strange mixture of irony and sincerity that would become the album’s defining quality. Rather than try to fill the vast expanse of the California desert with their music, they shrunk the songs down to fit inside a new world defined by cynicism and insecurity about the future. A song like “One” ostensibly sounds like it could fit somewhere on The Joshua Tree, but its lyrics belie a skepticism toward relationships and present the very concept of unity as a dream left unfulfilled.

After a fitful and unsatisfying period plagued by band infighting, “One” ended up being the breakthrough U2 needed to complete the rest of Achtung Baby. They recorded it alongside the funkier, more bass-driven “Mysterious Ways” and then left Berlin altogether to finish up recording in Dublin. It was a decision made, in some sense at least, in defeat. Clayton basically admits as much in Davis Guggenheim’s 2011 documentary From the Sky Down, wherein he reflects on the lessons gleaned from the band’s half-mad pursuit of history. “It was something we had to go through to realize what we were trying to get to was not something you could find physically, outside of ourselves, in some other city,” he says. “There was not magic to it … we actually had to put the work in and figure out the ideas and hone those ideas down.”

Achtung Baby turns 25 this month, which means that it was released in the immediate aftermath of Nevermind and thus in the midst of a sea change in rock music. Few people thought U2 had anything relevant left in them after the disaster of Rattle and Hum, and the band probably harbored some of their own self-doubts. Ironically, it was those same self-doubts that crept into the recording of Achtung Baby and made the album such a compelling, jarring listen — a complete makeover for a band that had come across as a gang of self-serious sods just a few years earlier.

In the years since its release, Achtung Baby’s mythology has shifted and expanded to fit a simpler kind of narrative. This is inevitable with classic or near-classic albums, which seem easier to understand and to categorize the further they slip into the past. Achtung Baby is now widely understood as U2’s “Berlin” album, much in the way Bowie’s trilogy carries an unmistakable whiff of the German capital.