There’s Really Nothing Quite Like Camp Flog Gnaw Carnival

Tyler, the Creator has created a festival that's gone way beyond his notebook pages 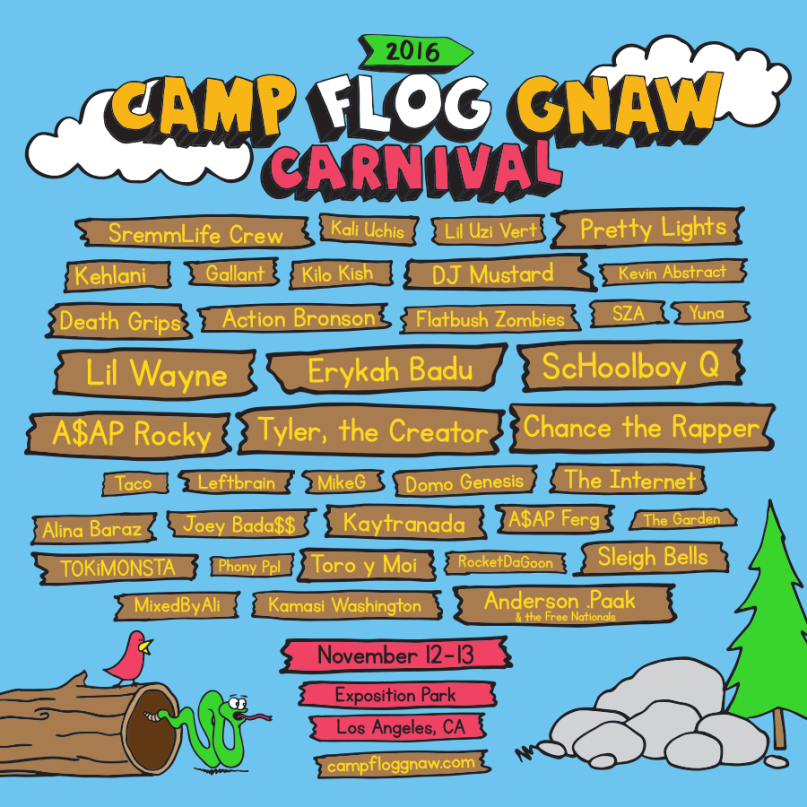 It’s hard to argue that the fifth installment of Tyler, the Creator‘s Camp Flog Gnaw Carnival was the year that it arrived as a festival. After all, year two offered up Frank Ocean as a headliner and featured a surprise appearance from Kanye West. From there, it has only become more self-assured and confident, attracting more fans and bigger headliners for each year. For 2016, expanding to a two-day festival became necessary. During his Saturday night set, the event’s founder joked to a massive audience by saying, “Coachella, we comin’ for ya.”

But beyond the obvious, quantifiable clues that Camp Flog Gnaw was bigger than ever (“We went from a couple thousand people the first year to 40,000 today,” Tyler proclaimed on Saturday night), there were little things. Over the course of four Uber rides to and from the event, I met a couple from Ventura, a woman from Atlanta, and a pair from Corpus Christi, all in town solely for the carnival. The Texan duo were outside their home state for the first time ever, and weren’t even doing sightseeing while in LA. They arrived on Friday and were leaving on Monday, driving 21 hours for an event that, again in the words of Tyler, began as an idea in a notebook five years earlier.

It’s inspiring to see what Tyler has created as a thank you note to his community, and how it has become an event of national proportions. Still, at its heart, the festival feels intimate and focused, seeking to please a very specific contingent of his fans. Now sprawling into almost the same footprint that FYF Fest uses at the same location (though FYF offers twice as many stages), the scale of the event doesn’t take away from the intention of a true community gathering. Tyler can be seen taking in the sets of the artists he’s booked, and even meeting fans as he walks the grounds. His voice is the first thing attendees hear when they enter the festival, welcoming them and hoping that they have a great time. From the artwork that provides endless photo opportunities to the carnival games that offer his brand of merch as prizes, Camp Flog Gnaw never feels like just another music festival. It’s obvious whose mind it comes from, and it’s all the better because of it.

But because of what on the Tuesday before the festival, our presidential election results meant that the intentions of the festival were irrelevant to what the actual event represented. With Donald Trump as the presidential elect, large-scale gatherings take on a new significance, with any communion of like-minded individuals rebellious in its own way. This is particularly true at Camp Flog Gnaw, where the vast majority of performers are African-American or other people of color. Both the artists and attendees represent a demographic who could be most effected by the impending government. But even directly in the aftermath, there was a sense that politics couldn’t sour this event. It was a safe space, and following the events of the week, it was exactly what the youth of Los Angeles needed.

That isn’t to say Trump’s presence wasn’t felt. ASAP Ferg asked the audience to raise their middlefingers to the “fuccboi president” elect, dedicating “Fuck Out My Face” to him. Erykah Badu gave a speech touching on general disenchantment with the media and political powers. And, maybe the best, was Tyler himself, saying he didn’t want to get political before inviting YG up to do it for him. It was the closer of Tyler’s set, and YG’s “FDT (Fuck Donald Trump)” set the audience ablaze. But Tyler and all the other performers knew the climate. They knew many in the audience were angry or scared. And for the most part, they took the opportunity to provide a temporary distraction, and empower the people that might need it most. In fact, Tyler kept telling people to put their phone away, and not just to take pictures. It was about disconnecting for a moment with anything outside of the festival gates. It was much needed.

Instead, festival goers took the opportunity to revel in an event that didn’t look like many other large-scale music festivals. During Anderson .Paak‘s Sunday night set — which, by the way, was truly spectacular (After opening with “Come Down”, a security guard asked me who was performing, and when I told him, he responded simply “that motherfucker is amazing.” You know it’s something special when the security guards are won over.) — he looked down at the audience and commented how great it was to see black people at a festival. “I don’t see many black people at most of these,” Paak said with a smile, before finishing his home run performance that included guest appearances from Domo Genesis and Mac Miller.

Tyler would echo Paak’s sentiment later in the night after a surprise reunion with Earl Sweatshirt, shouting out at all the black kids who came to the event. “Black people!” he shouted a few times, thrilled that his event was still reaching a broad spectrum of his core fans, and hadn’t been watered down to just another typical festival audience.

The overarching feeling that Tyler has tapped into something special with these festivals is contagious. It’s why ASAP Rocky comes back yearly (this time with a mob set performed on top of a giant video game controller). It’s why legends Erykah Badu and Lil Wayne don’t just phone in their sets, but seem dead-set on delivering something for the ages. It’s why longtime associate Earl Sweatshirt put aside his media-fanned beef with Tyler for a public burying of the hatchet. It’s why the likes of G-Eazy, Dillon Francis, Chris Brown, and Isaiah Rashad all relished in their opportunities to show-up unannounced.

And it’s why the event’s most talked about set, that of Chance the Rapper, was offered up like he was playing Coachella. Chance brought out D.R.A.M. for “Brocolli” and Francis and the Lights for “Summer Friends”, going into full rising-star mode for his Saturday night performance. Tyler’s joke that Coachella should be worried resonated, and Camp Flog Gnaw can legitimately be spoken about it the same breath with the majors now. Not bad for just an idea in a notebook.