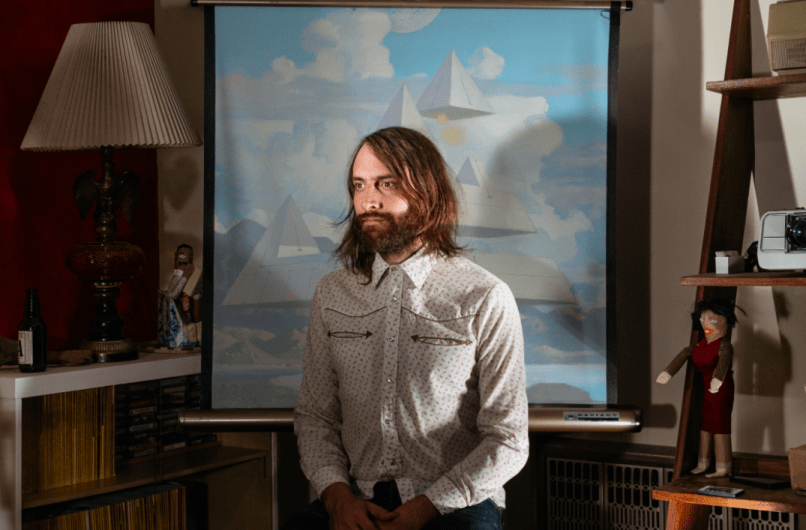 James Wallace has been many things over the last decade, from a favored member of Nashville’s underground scene as James Wallace & the Naked Light to a Mandarin interpreter for a group of Chinese ice carvers working in Music City USA. (No, that last bit has nothing to do with his music, but it’s damn interesting, isn’t it?) But recently, something shifted his focus.

He’d recorded his last record in the attic of Matthew E. White, an old friend and Spacebomb Records founder. As that Spacebomb sound began to seep deeper into his music, he came across a fascinating collection of love letters written by a UFOlogist to his paramour. Together, the influence of the Richmond-based label and the billets-doux led Wallace to a new record under a new moniker; now calling himself Skyway Man, he’ll release Seen Comin’ From a Mighty Eye on February 10th, 2017 via Yewknee Records.

Recorded at Spacebomb in Richmond, Virgina, the album features contributions from a number of the studio’s house musicians. Drummer Pinson Chanselle performed and wrote the percussion arrangements, Cameron Ralston handled the horns, and White himself even played some lapsteel. Andy C. Jenkins co-wrote a handful of the songs, including the first taste of the LP, “Terre, 9999”.

“I got this sort of haunting, Shangri-las type melody in my head one hot summer while fermenting in Nashville,” Wallace says of the subaqueous future folk track. “I spent a week outside building a fence, humming that melody and listening to their mating swell blend with motorcycle revs, and the occasional creaking freight-train in the distance. It felt like I was on a Submarine voyage. Eventually, this symphony sounded to me like the anthem of a rock and roll scene from some future underwater Atlantis culture that’ll pop up about 8000 years from now. Once I realized this, it came together pretty fast.”

Though the mix will be different on the final record, the net of eccentric sounds and dreamy vocals paint a picture of a vivid cosmic journey to come. Take a listen below.