From The Little Mermaid to Tarzan: Ranking the Disney Renaissance

by Dominick Suzanne-Mayer and Leah Pickett 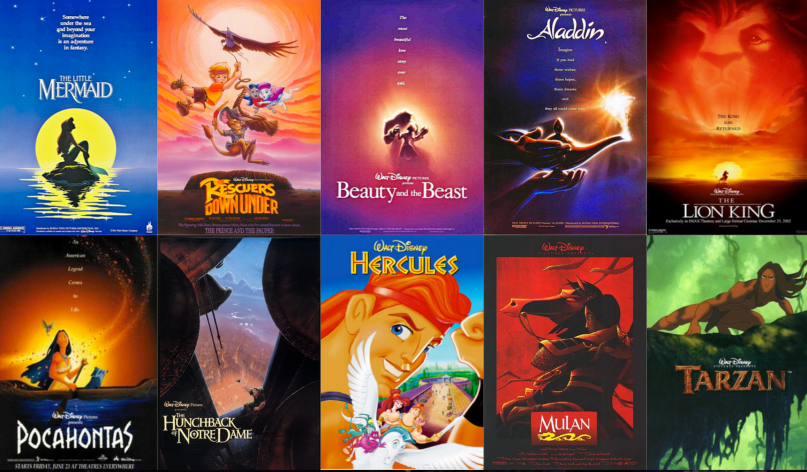 Editor’s Note: This feature has been re-published for the 25th anniversary of Beauty and the Beast.

On November 17, 1989, Walt Disney Pictures’ The Little Mermaid premiered in movie theatres across America, swimming into our hearts and kicking off what is now known as the Disney Renaissance.

After the colossal disappointment of the 1985 feature The Black Cauldron and slightly more profitable efforts like 1986’s The Great Mouse Detective and 1988’s Oliver & Company still getting pummeled at the box office by former Disney animator Don Bluth’s An American Tail and The Land Before Time, respectively, the House of Mouse was in dire need of a transformation. Pivoting back to the music-driven, ornately drawn fairy tales of the studio’s heyday, such as Snow White and the Seven Dwarfs, Cinderella, and Sleeping Beauty, then-CEO Michael Eisner hired lyricist Howard Ashman and composer Alan Menken, known for working together on the successful Off-Broadway production Little Shop of Horrors, to write the songs for an ambitious new film: an animated adaptation of Hans Christian Anderson’s The Little Mermaid.

Thankfully, the result was a critical and commercial success, garnering a higher weekend gross than Bluth’s All Dogs Go to Heaven, which opened the same weekend, and eventually breaking The Land Before Time’s record of highest-grossing animated film. The Little Mermaid also won two Academy Awards, for Best Original Score and for Best Original Song (“Under the Sea”), and breathed new life into what had hitherto been a fading empire. After struggling through a string of commercial flops from the early-’70s to the mid-’80s, the Walt Disney Company was finally back on top, with 1989 marking the dawn of the studio’s new golden era.

Disney would go on to release one animated musical a year for the next decade, resulting in 10 motion pictures that are widely recognized as the Disney Renaissance oeuvre. So, get ready for some prime millennial nostalgia as we rank each of the outings from meh to magnificent, and let us know in the comments section which films you still love, which ones you can’t stand, and which VHS tapes you broke from rewinding and playing over and over.