Punks for Hillary: The State of Political Music as Election Day Approaches

If punk bands won't call out the bullshit of politics, who will? 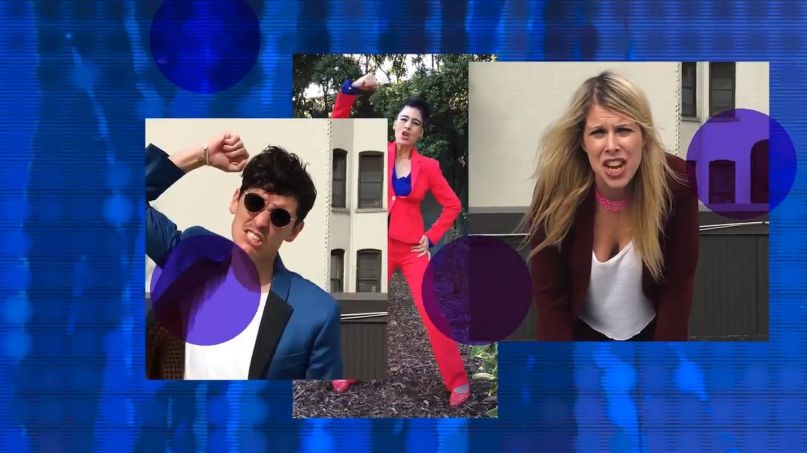 Jampaign is a monthly column in which Mandy Freebairn explores where music and politics collide in unique ways. This month, she discusses the glaring absence of punk bands getting involved this election.

With the presidential election mere days away, it’s safe to say Hillary Clinton pretty much has it in the bag. In addition to distancing herself from Trump in national polls, Clinton has also been raking in the celebrity endorsements lately. The National’s Matt Berninger confessed to being “a little bit in love” with the former Secretary, Jay Z is hosting a free benefit concert in Cleveland for her, and Miley Cyrus went door knocking at George Mason University in her honor. In addition to creating a strong line of defense against a Trump victory, these efforts are a pretty clear effort on the part of celebrities and the Clinton camp to galvanize young voters, a group that Clinton has struggled to mobilize There’s one recent endorsement, however, that stands out in this context. It’s not Katy Perry or Rachel Platten chanting, “Who do we want? We want H-R-C!” This time it’s riot grrrl-turned-electroclasher Kathleen Hanna along with her Le Tigre bandmates, Johanna Fateman and JD Samson.

Last week, the band, which has been on hiatus for several years, reunited to release “I’m With Her”, a pro-Clinton song and video. The track is a hyperactive, Trump-bashing ode to Clinton’s accomplishments, set to a saccharine electric beat. The complementary video features Hanna, Fateman, and Samson dancing around in red, white, and blue pantsuits, intercut with footage of a young Clinton, her supporters, and various women’s rights protests throughout history. The song ends on an exasperated note, Hanna yelling: “Don’t want a sexist, it’s two thousand sixteen!”

Le Tigre’s sociopolitical edge and Hanna’s feminism have been widely documented, so it’s not surprising that the band would be supportive of our prospective first female president, especially faced with such a horrifying alternative. What is surprising is how Le Tigre fit into a larger trend of sociopolitical artists embracing the politics of a moderate candidate. This has been one of the most polarizing elections in recent history, and since the primary, there has been immense pressure on more left-leaning voters to choose Hillary in the interest of preventing the drastic effects of a Trump victory. Not that this is necessarily wrong — indeed, we should be doing everything in our power to stop a man like Donald Trump from appointing as many as five Supreme Court justices (they serve for life, guys!). Still, there has been a surprising lack of sociopolitical involvement from punk bands this election, and “I’m With Her” might give us a clue as to why.

Despite her progressive views, Hillary Clinton is the opposite of radical. She is a conventional, left-of-center candidate who is a completely unsurprising choice as Democratic Party nominee. This is not a criticism, simply a fact — no one would expect Hillary Clinton to be embraced by punk musicians. This is precisely why there’s an abundance of anti-Trump songs — Pussy Riot’s chilling “Make America Great Again” being the most recent iteration — but a significant lack of pro-Hillary ones. Attempts to turn Clinton into a “cool” or “subversive” candidate seem disingenuous. Case in point, an independently organized campaign video that set Clinton’s accomplishments to Bikini Kill’s “Rebel Girl” was immediately taken down at the request of Tobi Vail, but not before critics called bullshit on the implications of the video. But even on the anti-Trump side of things, punk and political-minded musicians have largely been absent from the conversation this year (except, perhaps, Prophets of Rage).

Election fatigue sets in around this time every four years, but this year it seems the exhaustion began even before the conventions. Blame the 24-hour news cycle, the think piece trend, or your racist relatives on Facebook, but the fact is that most of us got tired of hearing about email controversies and building walls months ago. This might be why there seems to be such a dearth of punk politics this year — too much has already been said. Anything else would feel redundant, and if there’s anything that punk hates, it’s commonplace.

In a way, any presidential election is a difficult space within which to inject punk. After all, punk is largely about challenging the system of power, not placing someone new into that same system. But the 2016 election in particular has been a strain for artists who are typically seen as radical. In popular discourse, we seem to have reached a place of relative social progressivism, such that the mere fact of Trump as a candidate seems ludicrous — hadn’t we moved beyond all that? Threats of overturning Roe v. Wade and repealing Obamacare feel eerily familiar to the types of realities faced during the origins of punk. It makes sense, then, that artists who performed during those times would be eager to rejoin that fight and ensure that their efforts have not been in vain. As a result, there is a mismatch between the moderate nature of the candidate they are forced to align themselves with and the historical progressivism of punk.

But if this election does anything, it should remind us that no victory is fixed. Even after rights have been secured from a legal standpoint, there will always be forces attempting to repossess them. This is why it is so counterproductive to view social struggles as being “over,” because they never truly are (just ask the Standing Rock protestors). Historically, punk music has been a valuable tool for reminding us of this fact and urging us to keep our ears poised for those trying to counteract a movement. Now, however, with most punk music leaning towards the nihilistic, we either need a resurgence of punk or perhaps a passing of the gauntlet to another genre. After all, that same DIY, community-based energy can be found in underground hip-hop these days and has been present there for some time. “I’m With Her” might be the song we need at this backwards juncture in presidential politics, but punk politics will need to be a lot stronger than that post-2016.