President Obama awards Bruce Springsteen the Presidential Medal of Freedom: “I am the President, he is The Boss”

POTUS called Springsteen's music "the anthems of our America" 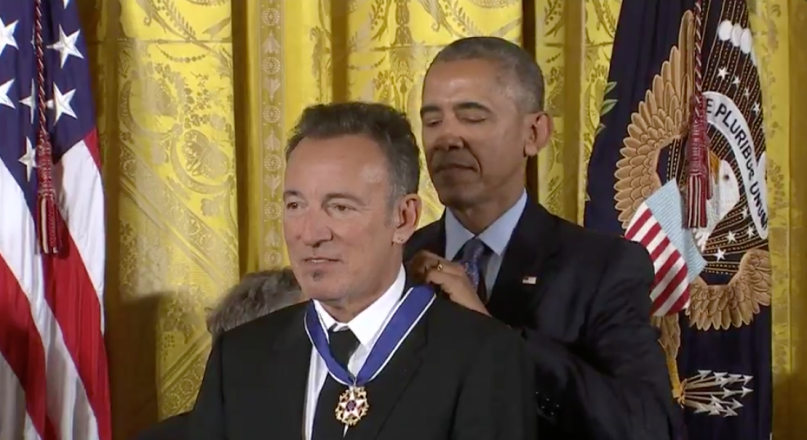 Today at the White House, President Barack Obama honored this year’s recipients of the Presidential Medal of Freedom. The country’s highest civil honor, the Presidential Medal of Freedom is presented to individuals “who have made especially meritorious contributions to the security or national interests of the United States, to world peace, or to cultural or other significant public or private endeavors.”

Over the course of the ceremony, President Obama went through the credentials of each honoree. By far, he spoke most extensively about Springsteen: “For decades, Bruce Springsteen has brought us all along on a journey consumed with the bargains between ambition and injustice, pleasure and pain, the simple glories and scattered heartbreak of everyday life in America,” the President began. Obama went on to single out several of Springsteen’s most famous songs, such as “Youngstown”, “Streets of Philadelphia”, and “Devils and Dust”, surmising, “These are all anthems of our America, the reality of who we are and the reverie of who we want to be.”

“I am the President, he is The Boss,” Obama proclaimed. “Pushing 70, he’s still laying down four-hour live sets … fire-breathing rock and roll,” Obama added “I thought twice about giving him a medal named for freedom, because we hope he remains, in his word, a prisoner of rock and roll, for years to come.”

Replay the ceremony in full below.

“He was sprung from a cage out on Highway 9, a quiet kid from Jersey just trying to make sense of temples of dreams and the mystery that dotted his home town, pool halls, bars, girls, cars, alters, and assembly lines. For decades, Bruce Springsteen has brought us all along on a journey consumed with the bargains between ambition and injustice, pleasure and pain, the simple glories and scattered heartbreak of everyday life in America. To create one of his biggest hit, he once said, ‘I wanted to craft a record that sounded like the last record on Earth, the last one you ever needed to hear, one glorious noise, then the apocalypse. Every restless kid in America was given a story, ‘Born to Run’.

He didn’t stop there. Once he told us about himself, he told us about everyone else: the steelworker in ‘Youngstown’; the Vietnam vet in ‘Born in the USA’; the sick and marginalized on ‘Streets of Philadelphia’; the firefighter carrying the weight of a reeling but resilient nation on ‘The Rising’; the young solider reckoning with the ‘Devils and Dust’ in Iraq; the communities knocked down by recklessness and greed on ‘Wrecking Ball’; all of us with our faults and failings, every color, class, and creed, bound together by one defiant restless train rolling toward ‘The Land of Hope and Dreams’. These are all anthems of our America, the reality of who we are and the reverie of who we want to be.

The hallmark of a rock and roll band, Bruce Springsteen once said, is that the narrative you tell together is bigger than the one you could tell on your own. For decades, alongside The Big Man, Little Steven, a Jersey girl named Patti, and all the men and women of the E Street Band, Bruce Springsteen has been carrying the rest of us on his journey, asking us all what is the work for us to do in our short time here.

I am the President, he is The Boss. Pushing 70, he’s still laying down four-hour live sets … fire-breathing rock and roll. I thought twice about giving him a medal named for freedom, because we hope he remains, in his word, a prisoner of rock and roll, for years to come.”

“Along with her honey voice, her soulful sensibility, Diana exuded glamour and grace, and filled stages that helped shape the sound of Motown … Today, from the hip-hop that samples her, to the young singers who’ve been inspired by her, to the audiences who still can’t get enough of her, Diana Ross’ influence is as inescapable as ever.”

“His characters are iconic. A Sicilian father turned New York mobster; a mobster who runs a casino; a mobster who needs therapy; a father-in-law who’s scarier than a mobster; Al Capone, a mobster. Robert combines dramatic precision and comedian timing with his signature eye for detail.”

“On Saturday Night Live, he’s created a world where a band of no names become comedy’s biggest stars, where our friends the cone heads, cheerleaders, land sharks, basement deadbeats, motivation speakers, an unfrozen caveman lawyer show up. And Tom Hanks is on Black Jeopardy.”

“As an actor, director producer, and as an advocate, he has not stopped. And apparently he drives so fast, he had breakfast in Napa and dinner in Salt Lake. At 80 years young, Robert Redford has no plans to slow down.”

“According to a recent headline, Sully was last the straw; we should never travel with Tom Hanks. Think about it: pirates, plane crashes … marooned in airport purgatory, volcanos … something always happens with Tom Hanks, and yet, we can’t resist where he takes us.” He’s also “an everyman who fell in love with Meg Ryan three times,” Obama added, going on to refer to Hanks as “America’s dad.”