Film Review: Manchester By the Sea

Kenneth Lonergan's drama is a masterpiece of pitch-perfect filmmaking 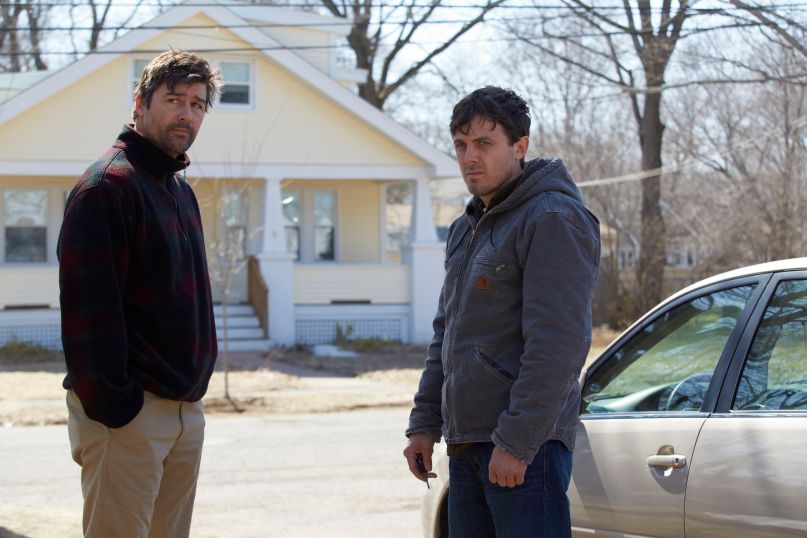 I’m not a Catholic man. But from what I’ve gathered over time, especially through 15 years of non-secular schooling, there’s nothing more painful or dangerous than Catholic guilt. It’s a poison that feeds on the human spirit, a weight that can’t be lifted, a burden that refuses to be shrugged off. Some might argue it’s nothing more than a myth, and who knows, they may be right, but there’s a fear one inherits from the scripture and its teachings — that all actions are judged, and some things can’t be forgotten. Filmmaker Kenneth Lonergan is certainly familiar with the term: Manchester by the Sea, which he wrote and directed, speaks to this suffocating illness. It’s what stunts his troubled lead, a devastated Boston handyman who can’t let go of his demons.

Set in the wintry confines of Manchester, Massachusetts, Lonergan’s latest film revolves around said handyman, Lee Chandler (Casey Affleck), who’s called back to his hometown after the sudden death of his brother, Joe (Kyle Chandler). Upon his return, he’s told by the family’s lawyer that he’s now the legal guardian of his brother’s teenage son, Patrick (Lucas Hedges). This is a problem for Lee, though, who has made every effort to remove himself from society. He doesn’t have any friends. He doesn’t have any loved ones. He only has a torturous past that he hangs on his shoulders. Why? Well, it’s the “why” that makes this story so compelling, and so pummeling. In fact, the “why” is the story itself, and Lonergan is wise to slowly unravel it bit by bit.

To clarify, Lee isn’t a Catholic man, either. His subscription is more of a cultural thing, a hallmark of having been brought up in the North Shore area of Massachusetts, something he’s quick to remember. “We’re Christians too,” he reminds Patrick late in the film, contending that Christians and Catholics are one in the same. On the surface, this seems like a superfluous discussion, but it’s actually a nod to Lee’s tragic constitution. After all, this is a man who has dedicated his life to fixing the problems of everyone around him, even tossing away their garbage, and yet he can’t for the life of him find a way to absolve or purge his own sins. Instead, he condemns himself mentally and physically, the latter involving brutal bar fights and a nasty wound to his hand.

Affleck delivers a career-best performance as Lee. His icy demeanor recalls the likes of James Caan (think The Gambler orThief), and his dreary eyes do all the screaming. That’s not to say he isn’t lively. Lonergan riddles the film with humor, and it’s the supporting cast that brings out the best of him, specifically Hedges. Watching the two trade barbs or outwit one another is part of the warm humanity to Manchester. So much of their dialogue recalls the poppy athleticism of 1997’s Boston-set Good Will Hunting, mostly due to the New England accents. However, considering Matt Damon co-produced the film, it’s no coincidence that Hedges shares a number of traits with the martian, straight down to his whiplash Masshole charm.

Which is quite contagious, by the way. Channeling his inner David O. Russell, Lonergan floods his production with a collection of flawed characters who are real and endearing enough that you just want to follow them home. Chandler breathes paternal life into Joe through the film’s many flashbacks. Michelle Williams nails the acid-tongued, no-nonsense wife (and later an emotionally rapturous performance). Gretchen Mol soaks up the role of a recovering alcoholic mother, Heather Burns tickles as the single mother of a sexually active daughter, and C.J. Wilson plays the friendliest Bostonian to ever hit the silver screen. They all have their moments both sad and hilarious, and that’s what makes them so vivid and tangible.

Palpability is a major trait of Lonergan’s drama. As we follow Lee around town, America’s defining middle class is on full display, and without ever being the single bit ostentatious. It’s inviting! We watch Patrick and his bandmates bicker about a restless drummer, we drive from one cozy house to the next, we laugh with a bunch of middle-aged men over a drunken game of ping-pong, and we witness two teens exploring themselves sexually (or at least trying to). There’s life in Manchester, and Lonergan takes his time to show us that it’s all going down whether Lee finds solace or not. Cinematographer Jody Lee Lipes helps him paint these stunning portraits with the kind of framing that’s goddamn mathematical. They don’t spare a single shot from beginning to end.

What’s remarkable about Manchester by the Sea is how enjoyable it is, despite its abyssal themes. In lesser hands, this could have easily turned into an unbearable sob fest, but it never comes close. Lonergan strikes a divine balance between the highs and the lows, wrestling in some dry humor even amidst the darkest moments — and it’s fitting every time. Without spoiling too much, there is a resolution for Lee, albeit a quiet one. It’s a tender landing that so few films ever seize, but to be fair, this isn’t your average production. This is pitch-perfect filmmaking, the kind that turns a hungry visionary into a popular last name. Rest assured, it’s all earned. Manchester by the Sea is a hearty, rewarding drama audiences will remember for years.