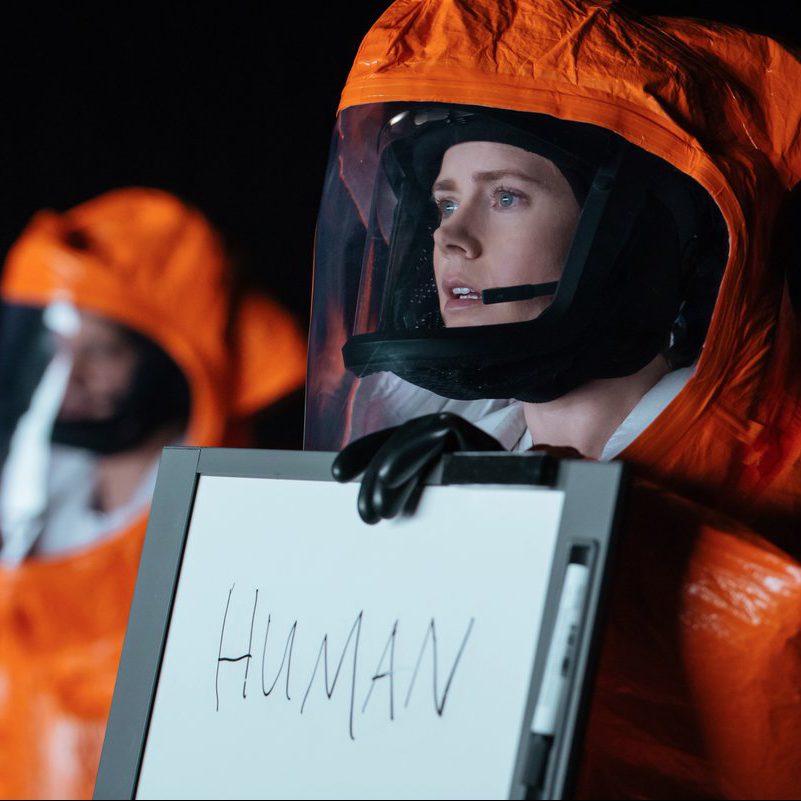 The following review was originally published as part of our coverage of the 2016 Toronto International Film Festival.

In keeping with Arrival’s theme of interacting with a never-before-encountered entity, here are some suggestions on how to approach this truly remarkable film:

— Avoid all spoilers before seeing it and avoid anything but the most basic of plot descriptions. While the script (by Eric Heisserer, based on a short story by Ted Chiang) and direction are strong and gimmick-free and the experience won’t be ruined by previous knowledge or unduly revealed plot points, anyone who loves film and storytelling owes it to themselves to allow this tale to unfold and unveil its magic at its own deliberate and devastating pace.

— Go in as open-hearted as possible. Again, the film is strong enough to overcome a fair amount of sneering cynicism, but director Denis Villeneuve holds nothing back in presenting this earnest, impassioned tribute to the human condition and viewers who approach his work in the same good faith will not be disappointed.

— Be patient. Arrival falls just short of perfect thanks to an expositional hiccup midway through the film and a climax that hinges on a borderline-hokey revelation, but the end will more than justify these ever so slightly sloppy means.

— For an added layer of appreciation, it doesn’t hurt to be familiar with Villeneuve’s oeuvre, from the strange genius of his early years as an arthouse wunderkind who could almost effortlessly marry off-kilter interpersonal drama with sweeping global happenings (see: August 32nd on Earth, Maelstrom) to his most recent work as an emerging Hollywood director with a solid knack for bringing thoughtful humanity to big(ger) budget thrillers (Prisoners) and crime dramas (Sicario). The film will absolutely stand on its own for the uninitiated, but the longterm Villeneuve faithful will get an extra thrill out of how well all of the various talents, themes, strengths, and visions he’s displayed over the course of his still-young career come together in Arrival. It’s a truly brilliant culmination of everything he’s done thus far, and he’s come a long way.

At the end of Villeneuve’s breakthrough film, 2000’s Maelstrom, a surrealistic adventure of catastrophic natural and interpersonal disasters as told by a fish on a chopping block, the doomed narrator announces that he’s about to explain the meaning of life — only he’s then promptly decapitated. There was a lot of promise loaded into that film: Here is a gifted, young filmmaker who’s almost equally adept at sweeping drama and the most intimate moments, who is fascinated by the motives and internal lives of complex women, and who seems to see a symbiotic relationship between grief and joy. The final scene held a promise of its own: an artist who might one day be able to answer that for us, or at least have fun toying with us while he tries to figure it out for himself. Since then, these themes have been present, at least to some extent, in all of Villeneuve’s work, but they’ve never come together quite as well as they do in the deeply philosophical and emotional science-fiction of Arrival.

When an alien race of heptapods make first contact via 12 pods distributed across the globe, Dr. Louise Banks (Amy Adams, who also outdoes her already formidable self here) is enlisted by the U.S. military to try to communicate with them and, more practically, determine what they want from their visit. Working against the doomsday clock of increasing global panic – not everyone is as openly curious about the new visitors as she is – Louise teams up with theoretical physicist Ian Donnelly (Jeremy Renner) to establish common ground with the heptapods. As she begins to piece together their complex written language, her memories of her daughter become increasingly intense and the past, present, and future begin to weave together in ways that … well, you’ll just have to watch for yourself to find out.

Combining the intellectualism and aesthetics of Stanley Kubrick’s 2001: a space odyssey with the heart of Andrei Tarkovsky’s Solaris and Steven Spielberg’s Close Encounters of the Third Kind, Arrival explores ideas of time, communication, determinism, and what truly makes us human. Then it hammers those ideas home by grounding all of them with intense consequences for its characters. (Somewhere out there in space and time, the time-traveling melodrama master Russell T. Davies is kicking himself for not coming up with this idea.)

In a film deeply fascinated by ideas of destiny, it’s interesting to note the extent to which Villeneuve’s previous work has prepared him for this particular film. His respect and compassion for female characters as fully-formed human beings, from August 32nd on Earth‘s Simone to the victims of Polytechnique through to Sicario‘s Kate Macer, has paved the way for a film in which Adams’ Louise can navigate both her intellectual and emotional genius with no concessions to Strong Female Character tropes or the completely unnecessary male gaze. His flair for playing individual and global drama off each other, something he honed with Maelstrom and Incendies, now allows him to construct a film in which Earth’s various interactions with the aliens and Louise’s conflicts with her own life can evolve in tandem and push each other to a perfect conclusion. His take on the balance between grief and joy, well … you should probably wait and see about that, too.

This time around, however, the end pays off where Maelstrom left off, touching upon the universe’s most important secrets, and revealing, however briefly and however elusively, some truth about what inspires us to do what we do. All without cutting anyone’s heads off.