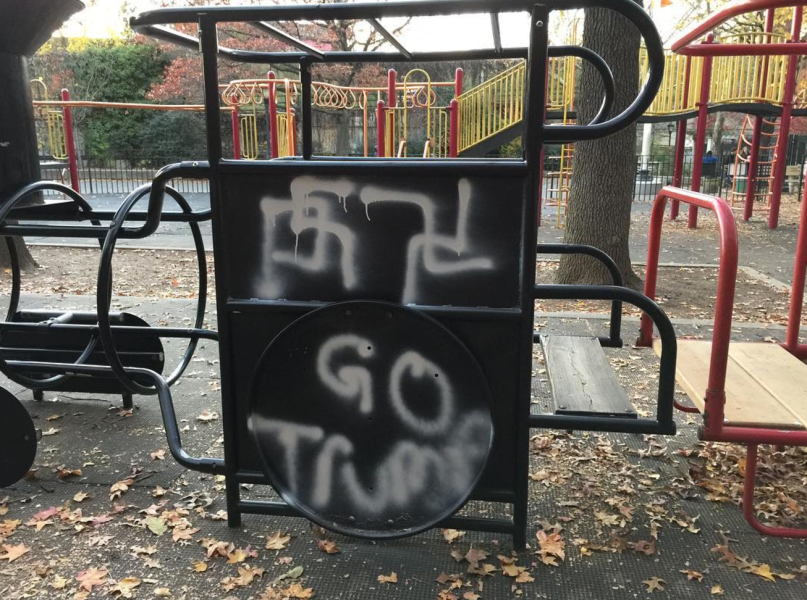 The incident occurred overnight Thursday. The NYPD Hate Crimes Task Force and the Parks Department is investigating, and the defaced equipment will be repainted tonight, according to City Councilman Brad Lander.

“Yet more hatred & anti-Semitism from Trump supporters,” Councilman Lander tweeted. “Swastikas on the playground equipment in Adam Yauch Park in BK Heights. Adam Yauch is weeping for our country. Mom was Jewish. Practiced Buddhism. Spoke out against Islamophobia. Apologized for homophobic lyrics.”

Yauch passed away in 2012 following a lengthy battle with cancer. The park, which he himself played at as a child, was renamed in his honor in May 2013.

Adam Yauch is weeping for our country. Mom was Jewish. Practiced Buddhism. Spoke out against Islamophobia. Apologized for homophobic lyrics.

NYPD Hate Crimes Task Force and @NYCParks staff on-site immediately. Will be painted over tonight. No place for hate. We will not be cowed.

On Sunday, Councilman Lander, State Senator Daniel Squadron, and other local leaders will gather at the park for an event standing up against hate.

Hate has no place in Brooklyn, NYC, or our country. Join me & colleagues Sunday to stand against hate messages. 11:30, Adam Yauch Park, BK pic.twitter.com/BZ95sx9HwF