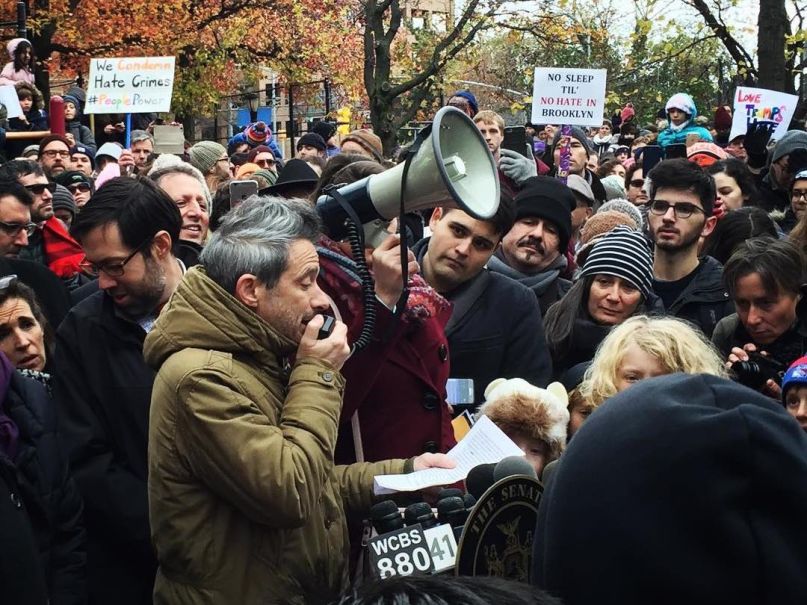 Beastie Boys’ Adam “Ad-Rock” Horovitz spoke at the protest. “We’re all here today because we’re thinking the same thing: Spray-painting swastikas on a children’s playground is a messed-up thing to do,” he said. “And for many of us, it has special meaning, because this park is named for Adam Yauch, who was my friend and bandmate for over 30 years, but he was also someone who taught nonviolence in his music, in his life, to all of us and to me.

“This is more about someone in our community linking Nazi Germany to Donald Trump in a ‘hell yeah’ kind of way in a park where children play,” Ad-Rock added, going on note several other incidents of hate crime inspired by Donald Trump’s election.

“Keep your eyes open, stand up for each other,” he continued. This is homegrown terrorism for real. I reject Donald Trump’s vision for America. New York City, I’m asking you to do the same.” He concluded his speech by reciting the opening lyrics to Beastie Boys’ “An Open Letter to New York”: “Brooklyn, Bronx, Queens and Staten/ From the Battery to the Top of Manhattan/ Asian, Middle-Eastern and Latin/ Black, White, New York you make it happen.”

Watch video of Ad-Rock’s speech below.

Additionally, the hateful graffiti was removed, and in its place, locals redecorated the park with hearts.